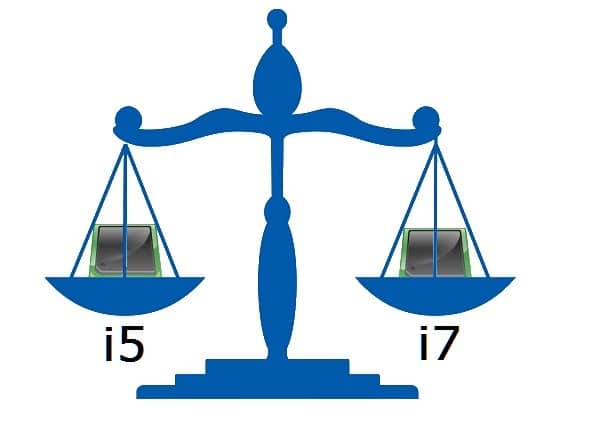 If you’re in the market to buy a Surface Pro 3, you might have noticed the abundance of choices available to you.

The Surface Pro 3 is now available in i3, i5, and i7 processor versions.

If you’re on a budget or you know you don’t need a really powerful machine, you’re probably going to opt for the less expensive i3 version. However, if you need more power, you might be wondering how much more power and whether you can get away with the less expensive i5 or if you have to jump all the way up to the most expensive i7 version.

If that’s the quandary you’re in, then this post is for you, as I’m going to do a performance comparison of the two versions (i5 and i7) rather than the more esoteric things like OS, size, weight, or screen resolutions…. all of the Surface Pro 3 models are identical in those aspects anyway.

Surface Pro 3 i5 vs i7: Performance/Price Comparison

One of the main reasons you would probably pick an i7 over an i5 (or i3-for that matter) is because you’re worried about computing power. You may have a high-intensity application you want to run and you want to make sure your SP3 has the power to do it, right? Either that or you want to play games. (Hey, I’m a gamer too. I’m not judging!)

To that end, I’m using a couple of online benchmark data-sets to create a performance vs price comparison. I figure it’s the best way to quantify the differences between the models. For the benchmarks I’m using the following data-sets:

OK, now that you know what data I’m using, below is a table where I list the price against the performance gains of each version.

I used the i5 with the 128GB drive as the “base model” so that I could normalize the data and make it easier to compare. As you can see, and probably as expected, i7 versions have better performance than the i5 versions. However, the interesting part is that the ratios for performance don’t keep up with the price jumps between each model.

Below is a chart that (I hope) better highlights the differences (the longer the line, the more performance you get for your money): 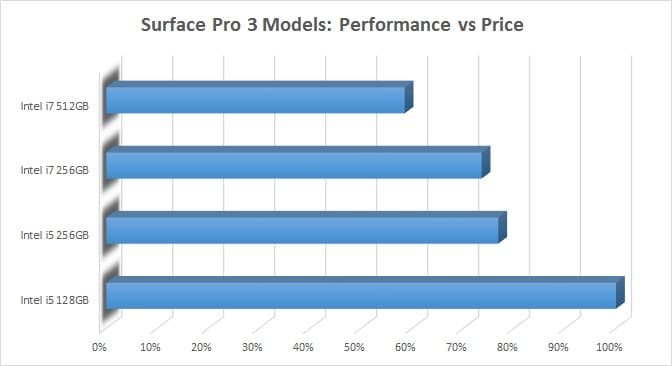 This means that if you look at performance scores vs price, you only get 59% of the performance for each dollar spent on a SP3 i7 512GB as opposed to the i5 128GB version. Interesting, huh?

If you’ve been wondering whether you need 4GB or 8GB of RAM in your Surface with an i5 CPU, consider the fact that the Surface comes with a solid state drive.

More RAM usually means better performance because your computer doesn’t have to page as often and paging can cause some performance issues because of the difference in speed between RAM and a disk drive.

However, since the Surface has a solid state hard drive in it, you won’t see as big of performance hit from disk paging as you would with an older platter-type hard drive.

There will be a performance hit with the 4GB model when compared to the 8GB model but, it won’t be nearly as much as you might fear unless you’re doing something like rendering 3D video while performing a full virus scan.

KTech Tips has a YouTube video you can check out if you want more information on the differences.

Surface Pro 3 i5 vs i7: Storage Space

To expand on the Price/Performance section, I’m highlighting the price differences vs the different drive capacities with the i5 and i7 models. I’m doing it because it’s important to know how much more you’re paying to get more internal hard dive space, especially since you can very cheaply expand the space to your Surface Pro 3 by adding a SDCard. 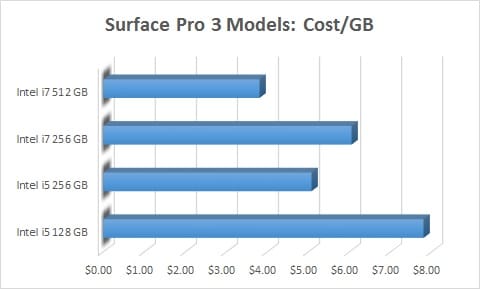 This time, there’s no baseline. It’s a straight comparison of price vs hard drive capacity for your reference.

EDIT (11/14/14): I’d like to thank a few readers (Waters, Jeff, and Cody who correctly pointed out that I had some bad information in this section as I had inadvertently inverted my numbers. I have since corrected the error and adjusted the section accordingly.

Now let’s look at the difference in up-time between the i5 and i7 versions. As you might recall, I did a Surface Pro 3 battery life comparison in July against our i5 Surface Pro 3.

So, for this post, I performed the “Everyday Use” test against both the i5 and i7 versions of the Surface Pro 3. For your reference, here are my test conditions: 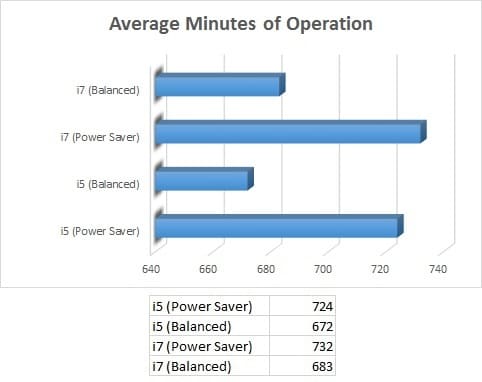 You might have expected the i5 version to have more battery life than the i7 but, that doesn’t seem to be the case. Apparently, the i7 has better power management features than you might expect.

You might also notice that the i5 did slightly better than it did during the testing in July. I attribute that to improvements in power management.

This is a bit (OK,fine, it’s a lot) more subjective than the sections above. As you may know, heat has been an ongoing problem with the SP3 i7 models so, this factor is important to consider.

Unfortunately, I didn’t have the equipment to accurately measure the temperature differences so, to try to quantify the differences, I enlisted a small group of 6 people to rate the heat they felt while running benchmark tests from 3D Mark. I feel this is a good way to do it since “my Surface gets hot” is a fairly subjective statement anyway.

I simply asked each tester to rate how hot the tablet got during the tests on a scale of 1-10 with 10 being the hottest. Here are the results we came up with: 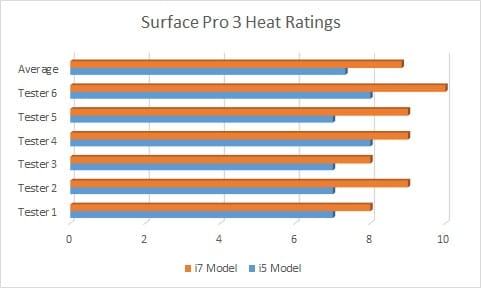 Despite having the same TDP (Thermal Design Power) rating of 15W, The i7-4650U processor in the SP3 gets noticeably hotter than the i5-4300U version. During our testing, all of the testers said the i7 version got uncomfortably hot at times. Especially in the upper right corner of the screen.

You might assume that the CPU is located in that location and you would be right. I put together the (somewhat accurate) illustration below to show you where some of the major components ate located inside the SP3 case. If you want a more detailed view of the internals of the SP3 then hop over to iFixit and look at their tear down of the SP3. 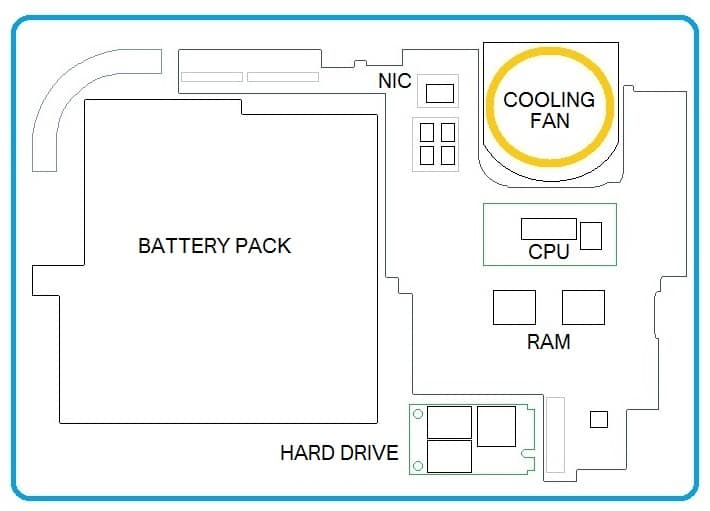 Personally, I’d say the i5 128GB has the best bang for the buck (except for internal drive size) but, your needs may lead you to pick one of the other models.

To that end, I hope this post proves useful to you if you’re trying to decide between a Surface Pro 3 i5 or i7 model. I tried to give you straight comparison of important factors so that you could make your decision based on (mostly) quantifiable facts.

If you found this post useful and not too confusing. If you think I missed something important, please let me know.