Well, It’s been 3 days since the Windows 10 Preview became available. Since then we’ve installed it on both a Surface Pro 2 and a Surface Pro 3. I’m happy to report that (so far) there haven’t been any major problems)

In this post, we’ll go over some of the changes I’ve discovered and I’ll point out new things that seem to work well and things that don’t quite work so well. That way, if you’re inclined to try the Windows 10 Preview on your Surface, you’ll have a good idea what you’re in for.

It’s important to note that the Windows 10 Preview is, essentially, pre-beta software and isn’t yet fully functional so, it’s likely that many things we point out as broken, annoying, or missing may be fixed, less annoying or present when Windows 10 goes released.

If that bothers you and you don’t want to risk it but would still like to try out Windows 10, you can always use a virtual environment. Back when Windows 8.1 came out, we put out a post explaining how to try it out using virtualbox. You can do the same thing for the Windows 10 preview, just follow these basic steps:

OK, now that you can try it yourself if you wish, let’s start my first impressions report at the beginning… the installation.

This installation on both the SP2 and SP3 was quite painless. There were no surprises and it did not lose any of my installed applications or data.

That said, if you try the Windows 10 preview on your Surface, you should create a recovery drive because the preview blows away the on disk recovery partition so you won’t be able to revert back to Windows 8 without it. If you don’t know how to create one, check our our post Free up space on Surface tablets, part 1.

Also, you should  make sure you have backed up all of your important data to OneDrive or some other location. It’s just a good thing to do.

By default, the Windows 10 Preview (which I’ll be referring to as “the preview” from here on out) is configured to present a Start Menu in desktop mode as opposed to the Start Screen in Windows 8. As such, it is obviously going to work best with a keyboard and mouse but, it’s still possible to use it with touch. 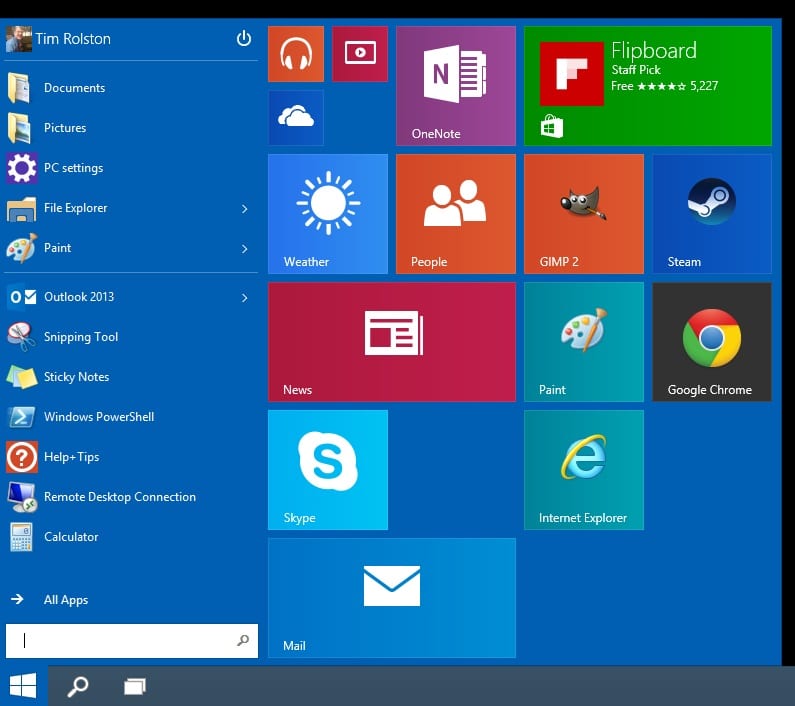 You can easily customize the Start Menu by dragging apps from the left section into the tile section on the right. Once there, you can adjust their size much like in the Windows 8 Start Screen.

While it is a big improvement for mouse and keyboard users and it worked just fine with touch controls, I didn’t like it (mainly because I have big fingers and some of the controls were too small for me to hit easily) so I ended up getting the Windows 8 Start Screen back by following the steps below.

It doesn’t switch you back to Metro like in Windows 8. Instead, the setting basically just replaces the Start Menu with the Start Screen. All of the apps continue to run on the desktop. 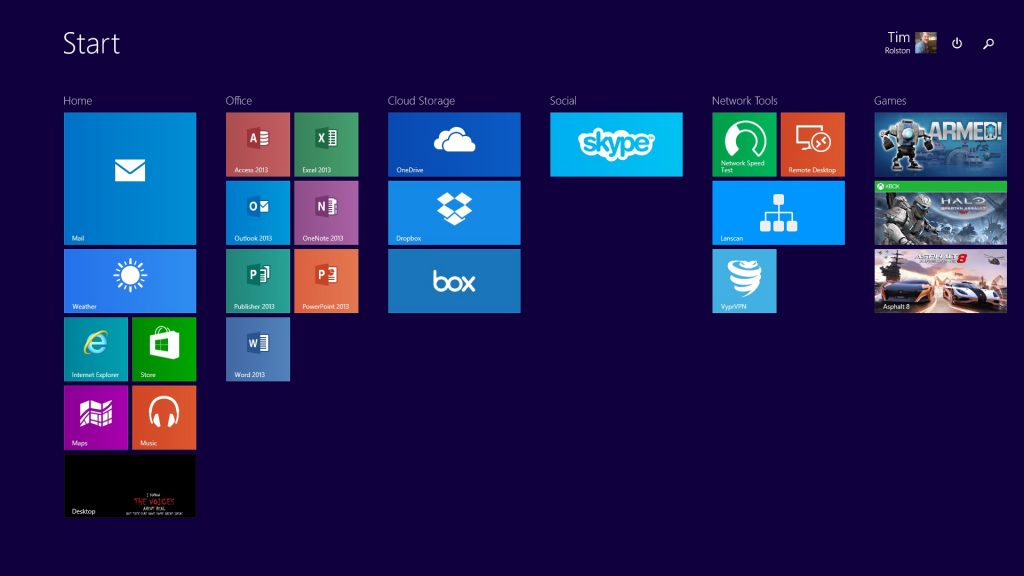 The final version of Windows 10 should have the Continuum option to automatically optimize Windows 10 for the device you’re running it on but, as this is pre-beta software, it’s not working yet. That’s why I had to manually switch between the Start Menu and Start Screen options.

Windows 10 Preview on Surface: Apps Run on the Desktop

As I hinted above, in the preview, all applications are run windowed in desktop mode (including native Metro apps). Below is an illustration of a couple of Metro apps (Mail and Weather, in this case) running on the desktop. 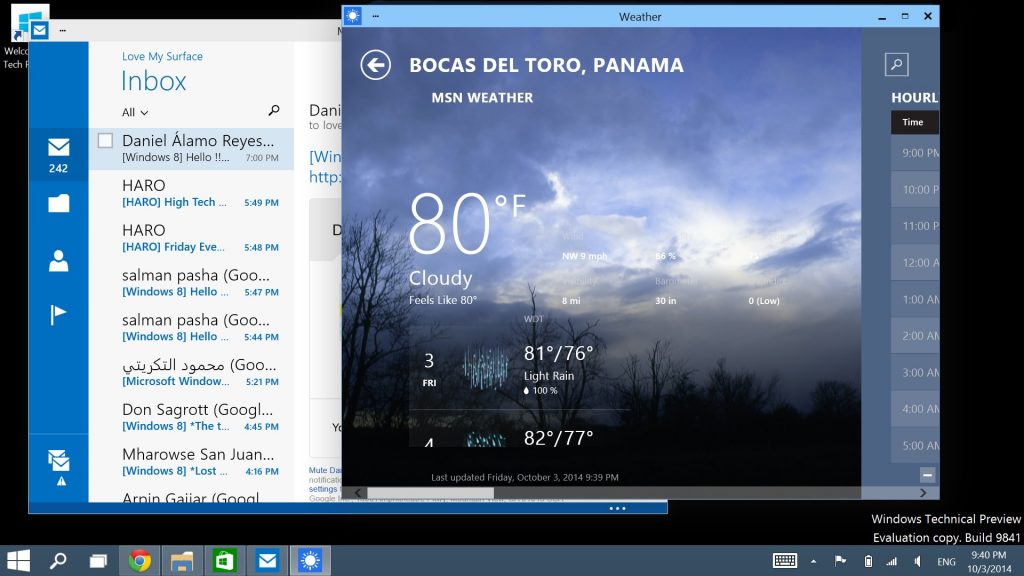 Everything I tried worked and it’s cool that you can run the apps in “windowed” mode so you can have several on screen at once. Unfortunately, it can be a little frustrating when using touch since it was obviously intended to be used with a mouse so the controls are a bit too small to easily activate with your fingers.

I don’t know if that’s how apps will run in the final version but, I kind of hope there will be an option (as part of the Continuum option) to run apps full screen outside of desktop mode if I choose to do so.

I guess we’ll find out next year.

A side-effect of apps running in desktop mode is that a few gestures don’t work as before. For example, the swipe from top gesture you use to close metro apps simply does not do anything.

In the preview, you have to use the old-style buttons on the application window to minimize or close apps.

Another change is the swipe from the left gesture used to switch running apps in Windows 8. In the preview it brings up the virtual desktop manager (more on that below) instead of switching to the next running app.

Neither of these gesture changes are show stoppers but, can take a bit of getting used to if you’ve been using Windows 8 in touch mode for a while. After 3 days of playing with the preview, I’ve managed to adjust.

Along with the start button, the preview adds a couple of icons to the taskbar in desktop mode as illustrated to the right.

In case you’re wondering, there doesn’t seem to be a way to remove them from the taskbar.

The first icon (the magnifying glass) brings up a Search feature and the other icon activates the new Virtual Desktop function.

Something I wasn’t impressed with was the new search icon on the desktop taskbar. While I think having a search icon there is a good idea, the fact that it includes a “Trending now” section from Bing with no apparent way to turn it off (in the preview, at least) is a bit annoying. 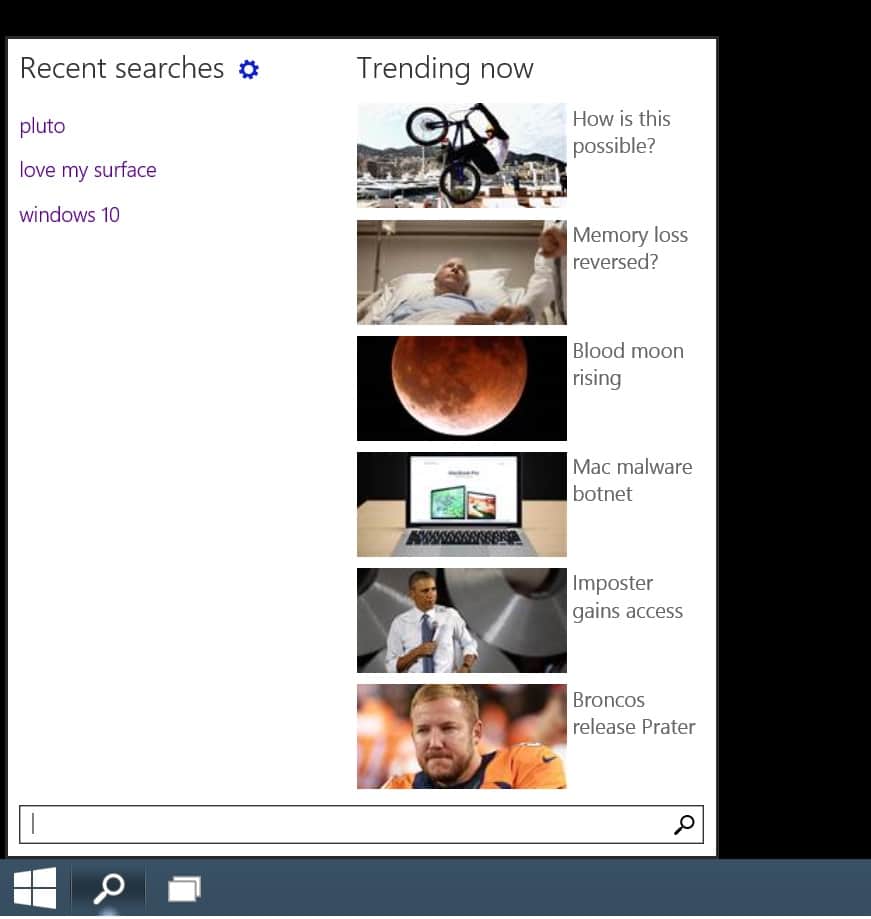 However, if you bring up the search charm or use the search charm from the Start Screen it behaves exactly like it did in Windows 8 so, you don’t have to see what the name of the latest celebrity baby is (Aston Kutcher and Mila Kunis named their girl “Wyatt” in case you’re wondering. See? I didn’t need to know that).

Microsoft added a functionality called Virtual Desktops. Virtual Desktops let’s you setup multiple “pages” that have different apps running on them. You can freely switch between those pages to access the running apps.

In the below screenshot, I’m running a couple of different apps on the same virtual desktop. 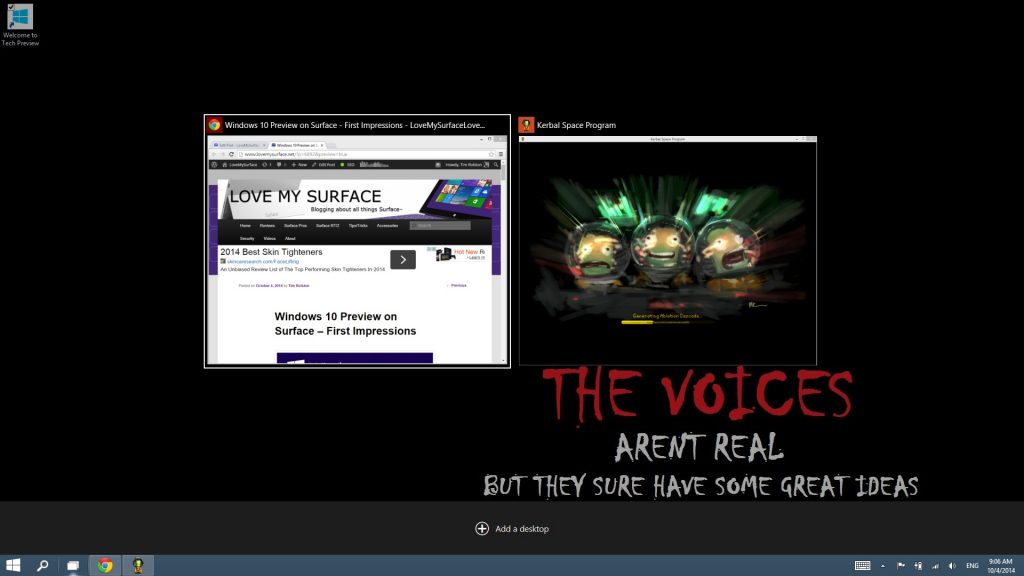 The advantage of this functionality is that it lets you simultaneously run more apps than could fit on your screen. It’s not quite as good as having a multi-screen setup but, it’s better than working on just a single screen.

In the screenshot below, I’ve added a second Virtual Desktop and, as you can see, I’m running additional apps on it. 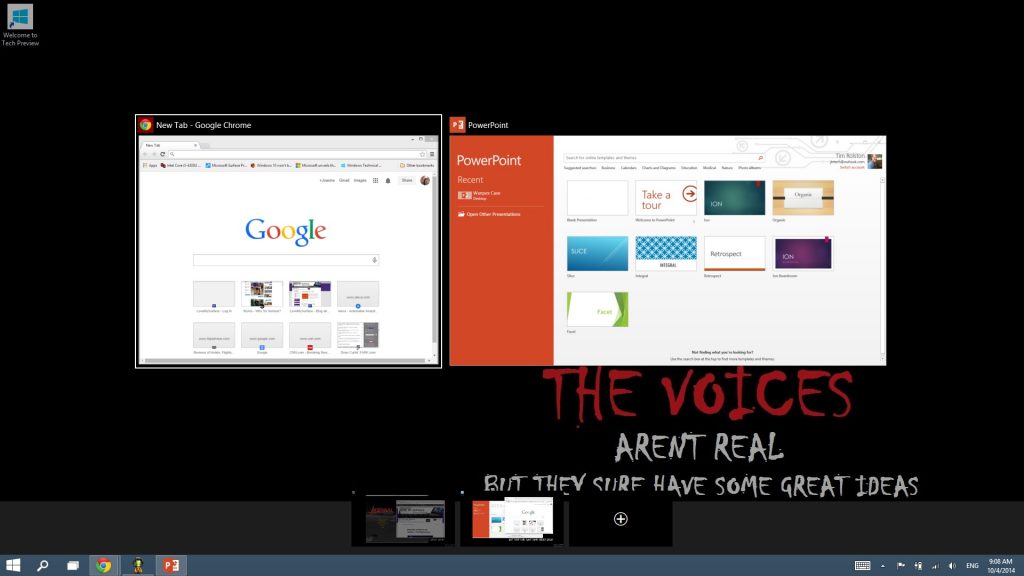 Technically, you could just switch between the apps using the icons on the taskbar but, it wouldn’t be as cool 😉

For the most part, I found the preview to be very stable. I did not experience any application or systems crashes on either the Surface Pro 2 or 3. and the performance of the system did not seem to be impacted in any negative way.

Below you can see the results of PC Benchmark tests I did before and after the installation of the preview. 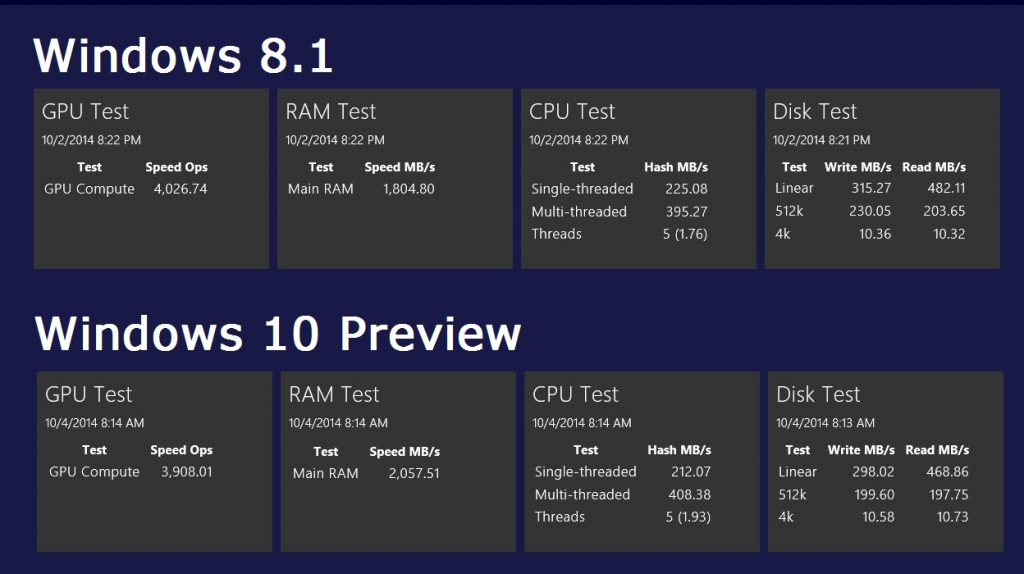 As you can see, the results of both runs are comparable. Anecdotally, I noticed that a few of the games I played during my evaluation (in particular Kerbal Space Program) seemed to run better under Windows 10. It could be perception bias but, I am happier running KSP on the preview than I was on Windows 8.

That’s not to say there aren’t a few annoyances here and there. For example, the Windows Store absolutely refused to start on my SP2 at one point. However, after a restart, it worked fine. The SP3 never had a problem starting the Windows Store app.

In this section, I’ll just share a few notes (in bulleted format) about the preview that didnt fall into one of the sections above. That way, if you try it yourself, you’ll be aware and can deal with them easier.

While it’s obvious that Microsoft is really trying to cater to the mouse and keyboard users out there, I think there’s a lot of promise for Windows 10 on Surface tablets – assuming the final version allows you to customize it a little more in favor of touch.

Joanna says that she’s disappointed that the much talked about Continuum option, that dynamically switches between Metro and Desktop for touch and non-touch devices was not included in the preview. This is one of the things she’s really looking forward to because the idea of auto-switching between a docking station and the touch Surface is excellent, if it works.

What do you think? Your fellow readers and I would love to hear your opinions.