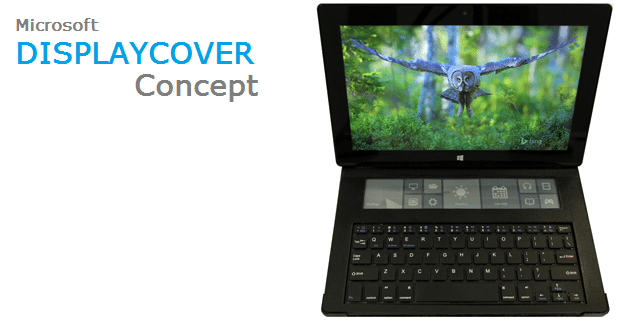 A few days ago, the folks over at Microsoft Applied Sciences Group (or ASG, these are the people who come up with new ways for computers to interact with people) posted a video showing a concept keyboard cover for the Microsoft Surface. They’re calling it the DisplayCover.

This project is the direct descendant of the Microsoft Adaptive Keyboard project from way back in 2009.

Microsoft DisplayCover for Surface: So what?

The concept DisplayCover has a built-in and touch-capable e-ink display that is intelligent enough to display items useful to the application you’re currently running. the ASG folks used the example of the Photoshop menus appearing on the keyboard display which would un-clutter the main screen and could make it easier to work on a picture.

In addition to displaying menu items, since it’s touch-capable, it could support gestures as in the example illustrations below:

The sharp-eyed among you may have noticed that the concept is missing the touchpad that normally comes on Microsoft keyboard covers. It’s missing because you don’t need it.

Since the display on the DisplayCover is touch-capable, it could have a “touchpad mode” or inking mode to let you write on it with a Surface Pen. Awesome, right?

Placement might be a problem but since the current concept was created for the Surface Pro/Pro 2 form factor, and the Surface Pro 3 (and supposedly Surface Pro 4) form factor is larger, there’s the possibility they could squeeze in a dedicated touchpad or maybe even a second e-ink display.

Microsoft DisplayCover for Surface: The Video

You can get some more information straight from the folks at Microsoft ASG about the DisplayCover from the video:

This concept cover is not yet available (and may never be as it is just a concept) but, here’s hoping…