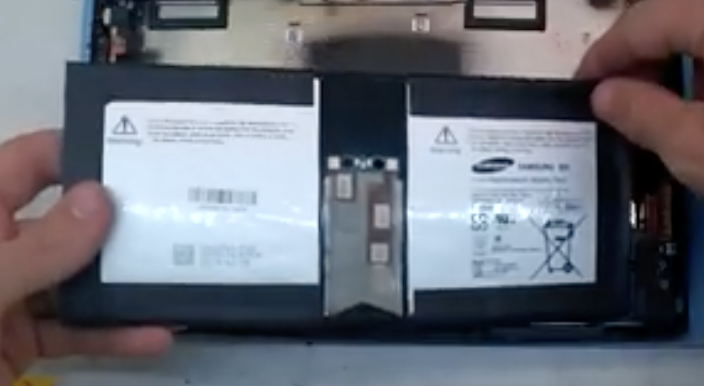 I don’t mean “in the lab” or “estimated based on power draw”. I mean will it actually last longer doing things that normal people like you and me use our Surface tablets to do?

To find out, I setup a couple of experiments designed to test likely real-life scenarios.

For all of my tests, both machines were running Windows 8.1 and both had the same power settings (listed below).

In this experiment I used my Surface tablets “normally”. I surfed the web, I checked e-mail, I chatted with people,  I looked at Word documents, and I may have played a few games (after all, gotta take the occasional break). Both computers went to sleep several times during the test as I was using them “normally” and not just hammering them.

When all was said and done, here’s the results of my testing…. 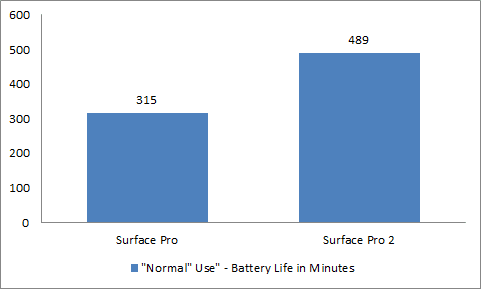 As you can see from the graph, the Pro 2 had a significant battery life at 489 minutes (8 hours, 9 minutes). For comparison, the Surface Pro had a battery life of 5 hours, 15 minutes which really isn’t all that bad.

Granted, it’s not nearly as good as an RT/Android device or an iPad but it’s pretty good.

This time, I’m assuming you’re on a long road trip (not driving I hope) or transatlantic plane ride where the plane happens to have WI-FI and you wanted to watch a movie or two to kill 5 hours of boredom. Worse yet, you don’t have your power cover yet so you have to make it through on the internal battery.

I also picked this scenario because streaming Netflix uses the screen, sound and network continuously so it’s going to drain your battery much faster than just surfing the web or checking e-mail which is a bit easier on your device.

The answer is yes.

I ran a test where I setup my Surface Pro and a Surface Pro 2 side by side and started playing (the same) Netflix movies.

The results are as follows….

Surface Pro battery life dropped to a little over 3 hours. The Surface 2 Pro fared better with over 5 hours of staying power.

So, after doing the benchmark tests above, I can say with certainty the Surface Pro 2 battery life is much improved over the Surface Pro. For me, it is more than enough to get me through a normal workday. I know there will be others out there that don’t think it’s good enough but I’d like to remind them that you’re getting a good solid 7-8 hours of real life use out of an i5 processor in one of the most powerful tablets on the market and that’s not something to dismiss lightly.

As always, if you’ve got questions or something to add, please feel free to comment.