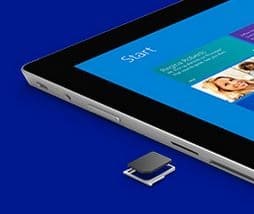 I have waited since last fall for the new Surface 2 4G-LTE and it is finally here. It arrived last night and, of course, I am busily working on setting it up.

Let me tell you about my first impressions of this little device.

This model is considerably lighter than my previous RT. I can’t believe I’m saying this but seriously, it is. I actually weighed it because I could not believe how much lighter and thinner it felt when I first picked it up.

It is only 2oz lighter than the Surface RT but, for some reason, that’s enough for me to notice the difference. The Surface 2 also has a silver case instead of the older gun-metal black, it has a nicer, brighter display and it has a noticeably faster processor. In my book, all of these are big improvements.

So, my first impression of the new Surface 2 4G-LTE = love it.

Setup is super easy. If you already have a Microsoft account, you will be given an option to use your existing settings (from previous tablet, desktop, or laptop). Since I’m upgrading from the Surface RT to Surface 2 4G-LTE, I chose to use my previous settings. It took about 10 minutes but now have an identical setup to my older Surface RT.

Here is what the Microsoft account ported over to my new Surface:

What did not port over:

Set up is easy, painless, and quick = love it again!

AT&T provides the 4G LTE network that supports MS Surface tablets. We happen to be AT&T customers already, so the setup was a breeze for us. All I had to do was to go to the AT&T store and have the Surface added to my plan for $10/mo. And I also received a nice surprise: I will get a $100 credit to my account just for adding the tablet. If I were interested in a new 2-yr contract, I could get an even bigger credit (I decided against it).

I tested the LTE signal by walking around campus and my work building and watching the bars. It was excellent. I have a Windows 8 Phone and the signal on the Surface is far better. I am going to attribute it to a better antenna but I don’t know for sure because I can’t find any specs on it. Let me tell you though, between the speed of the network and the excellent signal, it is unbelievably fast over the cellular network!

Cellular setup, signal, and speed on the Surface = love it again!

This new Surface costs $679 with free shipping from Microsoft. It is an increase of $130 over its non-LTE sister, which retails for $549. I’m not thrilled to be dolling out this kind of money but let’s see how it compares to its competitors.

So, from the table above, you can see that the price for the Surface 2 4G-LTE is competitive.

Cost = pretty good, of course free would be better….

Overall:
I’ve only had the new Surface for about 24 hours and so far I like it a lot, it is snappy fast, easy to set up, the cellular plan from AT&T is great, and the price is competitive. Oh, and don’t forget the intensives from AT&T ($100-200) and remember that you still get 200 GB of free SkyDrive space for two years and free Skype for 12 months – just like with other Surface purchases.

So, I will give this device a good beating and report back to you if I find any issues in the coming weeks but so far, I’m quite happy with it. My verdict is…..LOVE IT!

You may also like our posts on Review of Surface Carrying Cases and Surface Accessories.