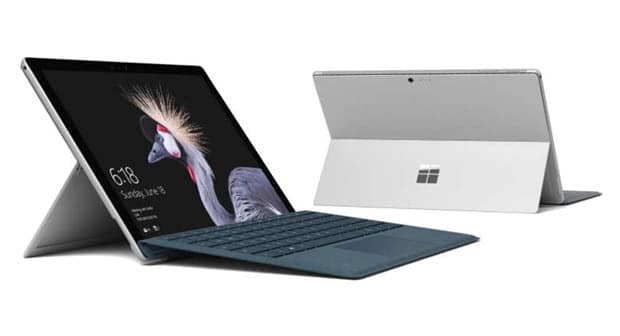 The Core m3 vs. i5 processor vs. i7 processor comparison has been around for a long time. And for each processor generation, the “best” option differed depending on individual needs. Microsoft has finally released a new version of their Surface Pro with the Kaby Lake processors.

So how does this generation of Core m3 vs. i5 vs. i7 perform within the Surface Pro skin?

Here are the specs on paper:

As you can see, the number of cores and threads don’t change across the range, just as it has been in the past.

Stay tuned – another article will address this.

The GPU units are different across the board as well. In theory, the Iris Plus 640 found in the Core i7, should give 3D tests huge boosts.

Let’s move on to the benchmark scores.

Novabench has been around forever. It reports a nice, simple set of numbers for easy comparison between different Windows (or iMacs) devices.

Novabench measures the CPU performance (integer, floating point, and MD5 hashing), GPU test (3D graphics), and raw hardware performance (RAM, Disk speeds). The entire test only runs for a few minutes so I would not call it extensive, but it is easy to compare across different devices.

Here are the results for each of the Surface Pro machines:

Naturally, having good graphics capabilities helps with gaming. But the Core M3 takes things even further than that by boasting that it is the ideal choice for it. According to Intel, the gaming experience it provides is one of a kind because of how amazing the visuals are. They even say it’s the best to come out yet!

The best part of the Core M3 is the fact that you do not need an added card in order to experience all that it has to offer for gaming. Not only is the display amazing, but the amount of games to choose from has increased. You have Google play your fingertips, and the M3 processor belonging to the core is the thing that changed the game. Tests have been conducted that have proven the M3 processor core to be significantly faster and higher quality. There is less waiting time when it comes to videos and code loading. For the gamer, this is incredible news. The Core M3 rightfully boasts being able to save you precious time overall.

On the flip side of the coin, video editing is a task similar to gaming. You will need the ability to experience minimal glitching, fast performance, and smooth visuals on-screen. All these things are promised with the Core M3, but remember that this processor is best for basic editing. Things like editing GoPro videos can be done, but it is not the absolute best option for video editing anything more than the basics.

As far as the i5 vs. i7 processor laptops go, some of the issues seen with these two types are the size in weight. The i5 is significantly heavier than the i7, which is enough reason for some to choose the slightly more expensive i7. These are definitely faster as well as hold more storage for games and videos. Many would say at the end of the day that the i7 is not a significant enough improvement in the areas of these two categories for the jump in price. You have to remember, the core M3 is an entirely different processor from the i5 and i7. So you are really comparing the M3 and then the i5 and i7.

PCMark v10 is a benchmark designed to produce numbers realistically mimic the work environment. It uses a wide variety of tests. Hence, it doesn’t rely heavily on one type of analysis over another.

The results are split into  three categories– ‘Essentials,’ ‘Productivity,’ and ‘Digital Content Creation.’ And finally, it produces a single number that represents the overall performance, called ‘PCMark 10 score’.

Overall, the performance gap between the Core i7 and Core i5 is roughly similar to that of the Core i5 and the Core m3 based on these results.

The level of cache available determines the productivity levels at which you can work. Naturally, the Core M3 is decently fast, while the i7 has faster speeds than the i5.

The beauty of the larger cache is that you can do so many things at once, thus the larger the cache, the more things you can do. Some of the things a large cache helps you to accomplish are multi-tasking edits, spreadsheets, documents, browsers, and calculations.

A large cache is great for those who use their device to work and need to get a ton done at once. Many of us are entirely reliant on fast devices to do our jobs efficiently. This means that since the cache is the background storage that makes your multitasking readily available, you will need a ton of it.

Memory cache speeds up your computer, but how exactly? Well, let’s walk through it. The cache is a high-speed data storage piece. In this piece, the microprocessor keeps track of your most used data and stores it. If you begin to use programs that require more substantial data usage, this same microprocessor will use the cache memory processor space to store that data and carry out the necessary tasks quickly and effectively. The more storage room, the higher the speed at which it can work. So if your work is overwhelmingly large, it is going to be best to have more spacious cache storage.

If we are getting technical, i7s on average have 12MB, and i5s have 9MB. Depending on your job and level of productivity needed, you can determine which system is a better fit for you.

But there is one caveat to be aware of: there is a point at which a higher cache does nothing for speed. It is essential to recognize this as you purchase either the i5 or i7. It is useless to spend large amounts of money unnecessarily if the larger cache won’t even do the things you want it to do. It is not harmful to have a too large cache, but it might merely be useless.

Since most caches tend to be on the smaller side, this is only something you will need to worry about if your amount of work and productivity needs are exceptionally high. To determine this, you will need to use your past experiences with maxing out a smaller cache in the past and go from there.

All in all, it is a general rule that productivity performance is best done if you have enough space to store your various common applications. It only makes sense for this to be the case. Think of it like having those cookbooks you read regularly or favorite coffee mugs you use all the time in an easily accessible front drawer or cabinet. The same is true of a cache memory storage space.

3DMark measures precisely what the name says – 3D graphics performances of each device.

Both the Core m3 and the Core i5 models have failed the Time Spy test which also happens to be the newest and the most stressful test of this group. Time Spy test needs more V-Ram to run the entire test clean and completely.

The results are pretty clear – there is a small incremental improvement going from the Core m3 to the Core i5. But by far the most significant gaps exist between the Core i5 and the Core i7 models.

Google Octane is a browser-based benchmark site. You don’t need to install any applications on your laptop. It measures the execution speed of the Javascript engine.

Similarly, Mozilla Kraken also measures the Javascript execution speed. I’ve added this to get some diversity.

The results here show that the Core i5 performs much better than the Core m3 in both tests. The Core i7, on the other hand, only returns slight advantage over the Core i5.

Let’s Talk About Core I9

Core i9 is a workhorse compared to the i5 and i7 cores. The use of i9 is typically for professional workers or very prestigious gamers. This core is a costly investment, but it is useful if you need the space. I9 has proven itself to be very productive and valuable. You will have to do some research to find one of the few laptops that offer it, but it is known for being one of the most powerful available in our day and age. As a laptop addition, this is a powerful agent. But for a desktop, it is an absolute wonder. This more advanced and stronger option is even more costly, but it is known as the most loved among serious gamers. If you need a bit more juice, the i9 core may be for you!

Final Thoughts on the Core M3 vs I5 vs I7

If you are looking to get some excellent performance in 3D graphics, you have no choice – you must get the Core i7 model. The difference is so big that it would be stupid to consider another model, even if they are significantly cheaper.

If you are looking for a productivity model with some value, then the choice is less obvious. One factor that will weigh significantly in your purchasing decision is that the Core m3 model only comes in 4GM of RAM and 128GB of SSD. If you need more capacity, the m3 model isn’t for you.