By looking at the specs on paper between these processors, you’d expect the Core m3 model to grossly outperform the rest. But what about the differences between the Core i5 and the Core i7? After all, their TDP numbers are identical, despite featuring much more powerful GPU.

The following are the specs/stats for the batteries built into each model: 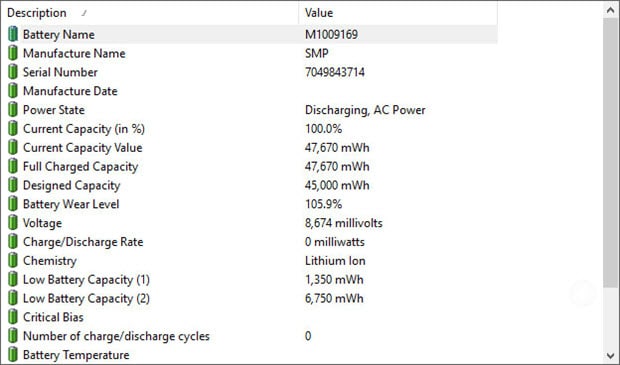 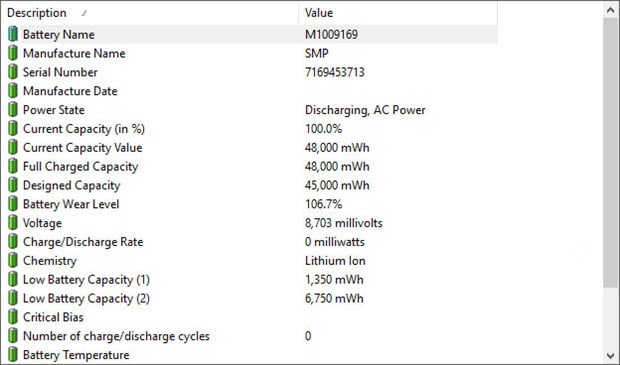 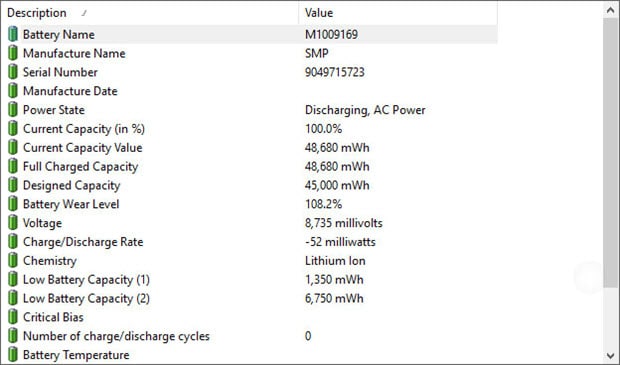 Can you see the difference? The differences are extremely small. So it appears that all 3 models are using identical batteries, all designed to be rated at 45,000 mWh.

(Just as a comparison, my “old” Surface Pro 4 features a 38,152 mWh battery. These are significant 18% improvements!)

I’ve setup all 3 devices to run an identical Youtube video with 32 mins 5 secs duration. The machines were fully charged, the power settings were left at their default settings (which is about 33% level). The volumes were left at the maximum level.

The video in this test was HD quality (1080p) and they were streamed via WiFi. I have plenty of WiFi bandwidth capacity, so the videos weren’t choppy at all even when all of them were running at the same time.

Here’s how they fared. These are the remaining battery capacity after the video has finished. (Hence higher % the better!)

I’m actually not surprised that the Core i7 performed poorly here. There is a good chance that the Iris Plus 640 GPU in that Core i7 is consuming more than the Intel HD GPUs in the lesser CPUs.

What I am surprised here is that the Core i5 with “slightly better” Intel HD 620 consuming essentially the same battery power as the Core m3 with the lesser Intel HD 615.

Since the visual video quality of all 3 were exactly the same, the Core i5 wins here. At the default power settings, of course.

Once again, the devices were ran using their default power settings. This time, the streamed video is a 4K feed (2080p). Obviously, this will stress the machine far more as there are 4 times as many pixels to push through.

I had to run one machine at a time to make sure WiFi is not the bottleneck.

Even the Core m3 machine performed admirably as far as the smoothness is concerned. I expected the Core m3 machine to struggle, but that wasn’t the case. Perhaps Youtube’s video compression technology allows for less powerful machines to stream 4K feeds with less raw power. Also, Intel claims Kaby Lake can do 4K streaming better, which perhaps is the case here.

Here are the results for the 4K test. I have also included the result for the HD video for some comparison points.

What you can see here is that for the Core m3 and Core i5 models, the numbers are just about where you’d expect. But the Core i7 model has performed significantly better – now reasonably close to the lesser models.

Apparently, the Core i7 model doesn’t consume any more power when it is streaming 4K over HD contents!

In this test, I’ve lowered the power saving mode all the way to the minimum on all the machines. This immediately caused all screens to go dimmer as well. If you want to watch Youtube videos as long as possible on batteries with no outlets around you, this could be one scenario.

Under this setting, all machines came out about equal. This shows that it is possible to throttle the Core i7 machine down to the level of the lesser machines if you desired, to increase the battery usage time, at least for Youtube viewing.

PCMark is normally used as a benchmarking tool to test performance of different devices. But it also has a feature that allows users to run each tests until the battery runs out completely. The application then captures the total run time.

Here are the description of some of the test featured in the PCMark v8.0:

Here are the results for each tests. This time, we are back to the default power setting.

After all, the overall power consumption isn’t only about the CPU, right?

Well, that was a disappointing moment… There is a small improvement, but based on this set of test results, you can tell the minimum power setting doesn’t really extend the battery life all that much.

The default setting already pulls the power setting to a one third level, and that appears to be a nice tradeoff level, at least for a productivity type of work.

During testing, I observed an interesting fact.

The chargers that came with the Core i7 and the Core i5 models were identical. Both features a box with cords coming out from both ends. The Core m3 model however, uses a completely different design – the box and the plug are integrated together. I assumed this is possibly to save cost made it possible due to the lower power requirement of the Core m3 model.

So what about the charging time? I had the opportunity to start charging all 3 boxes at the same time multiple times after they were all completely drained.

Interestingly, after a short while, both the Core i7 and the Core i5 models were sitting at 70% charged, while the Core m3 model was still sitting at 62%!

May not be a big deal to most of us, but it could make a difference under a difficult or unusual circumstances, especially during travel.

For productivity type of workflow (both for home and work usage), the Core m3 clearly wins, by a good margin. But for Youtube streaming, only the Core i7 loses out but you have an option to use the minimum power settings to almost level the competition.

I was hoping to see the Core i7 perform better for work usage under minimum power settings since that is the model I want to use for my daily need, but I do travel a lot, unfortunately.

My solution? I’ll keep the Core i7, and let my dear wife use the Core m3 without telling her it is an Core m3 model. That way, we (well, I) have the best of both world… 🙂

(Please check out this review article, if you are interested in performance comparison between the Core m3, the Core i5 and the Core i7 models using the Surface Pro)