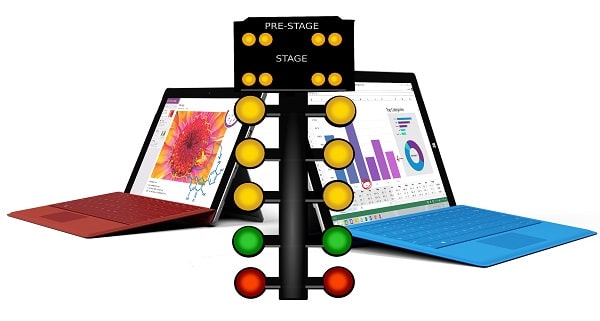 When I first got my hands on a Surface 3 one of the first things I did was run several benchmark tests against the unit.

I feel it’s important for you to note that I was working with the 2GB version for these benchmarks because every other benchmark article on the Surface 3 I’ve seen is using the 4GB version which may give you slightly better marks due to the extra RAM.

OK, before I start the actual Surface 3 benchmarks, let me point out that I will be referring to the lower end Surface 3 as the “2GB Surface 3” and the higher end version as the “4GB Surface 3” to help avoid confusing the two versions.

For all of the tests I ran, I’m presenting the average results of 3 separate test runs to increase accuracy. In addition, all of my results will be comparing the Surface 3 against the following machines in order to give you some context…

I’ll also be incorporating results from another Surface 3 benchmarks post that I’ve found on the internet where the 4GB Surface 3 variant was used. That way, you’ll have a more complete picture of the performance differences between the two versions.

Brad Sams over at Neowin also did the Ice Storm, PC BenchMark, and Google Octane tests with the 4GB Surface 3 Microsoft sent them to review; so, I included his results in red below to give you a complete comparison.

This test was using 3D Mark from the Windows store. Since all of the devices were too powerful to run the Ice Storm or Ice Storm Extreme tests, the results below are from the (more rigorous but much more boring to watch) Ice Storm Unlimited test… 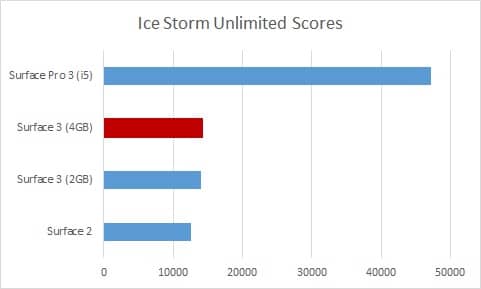 This test was done using the PC Benchmark app from the Windows store. It’s one of my favorite benchmarking apps due to its simplicity.

In the two graphs below, you can see the single-threaded and multi-threaded CPU test scores for each tested tablet (along with Brad’s results for the 4GB Surface 3) 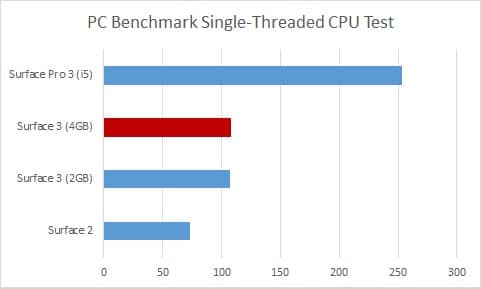 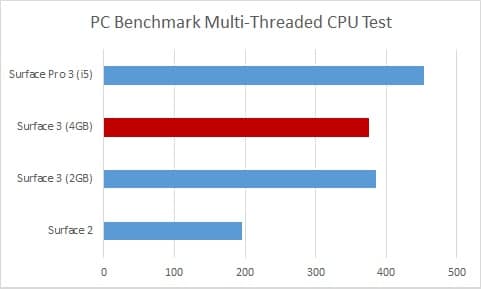 As you can see the 2GB version results are nearly identical to what Brad posted for the 4GB version. I would expect this as both versions have the same CPU just different amounts of RAM and different sized hard drives.

This test is again using the PC Benchmark application but, this time, the RAM speed is being compared in MB/Sec. 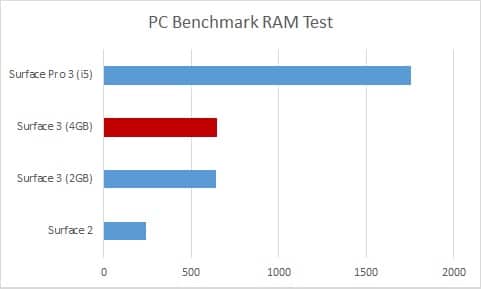 Again, no surprise that the two versions of the Surface 3 are almost identical as one simply has more RAM than the other but, they are of the same type. Once again the SP3 blows the Surface 3 out of the water for performance.

This test was done using Google Octane which combines a bunch of benchmark tests and tests (primarily) the Javascript processing ability of a machine; so, it’s kind of an indirect way to test the processing power (but it’s incredibly easy to run; so, why not include it?) 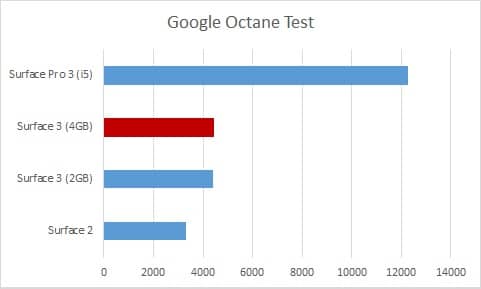 The benchmarks below are from the GeekBench 3 application. This time, I’m using average results from the Geekbench database for the 4G Surface 3 results. Also, since the Surface 2 is a RT device, I couldn’t run the Geekbench tests so there are no results for it listed below… 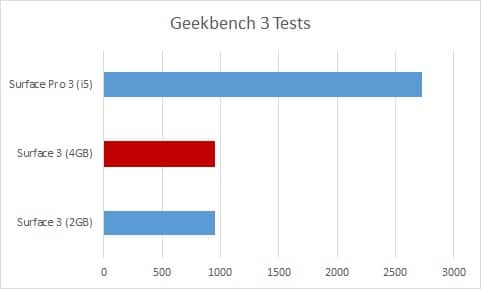 Again the difference in RAM between the 2GB and 4GB Surface 3 models doesn’t seem to impact the performance very much.

In general, the Surface 3 benchmarks show that both variants are very close for performance. It seems the extra 2GB in RAM simply doesn’t give the 4GB Surface 3 any significant extra “oomph”. So, if you’re trying to figure out which variant to get based on performance, I’d say they are both pretty much equal.

That said, the 64GB SSD that comes with the 2GB Surface 3 is tiny and the 128GB SSD might be worth the extra $100 all by itself even though there isn’t any appreciable performance gain.