Ever since its announcement, the Surface Book has become one of the most desirable pieces of hardware on the market. Everyone wants one and they are running short on pre-orders everywhere!

One of its most novel and powerful features, the GPU, has also been one of the biggest mysteries to Surface fans: we all want more details on the dedicated NVIDIA GPU that’s included in the base section of the high-end models.

Many speculations have been drawn about what chip is powering the graphics of the Surface Book and Microsoft hasn’t been too interested in clearing up the mystery up to this point.

Now, some folks over at Surface Book’s graphics.

Surface Book GPU Details: What Chip Is It?

One, lucky Redditor, happens to work in a Microsoft Store and had an opportunity to log into a Surface Book with Admin rights. There, he was able to get some of the Surface Book GPU details by running a couple pieces of software.

After running NVidia’s Control Panel on the Surface Book, he\she found specific numbers to confirm that the chip is (probably) a customized Nvidia 920M or 940M GPU.

Below you can see a screenshot from TechPowerUp’s GPU-Z utility. The Surface Book is on the left and an NVIDIA GeForce 940M is on the right: 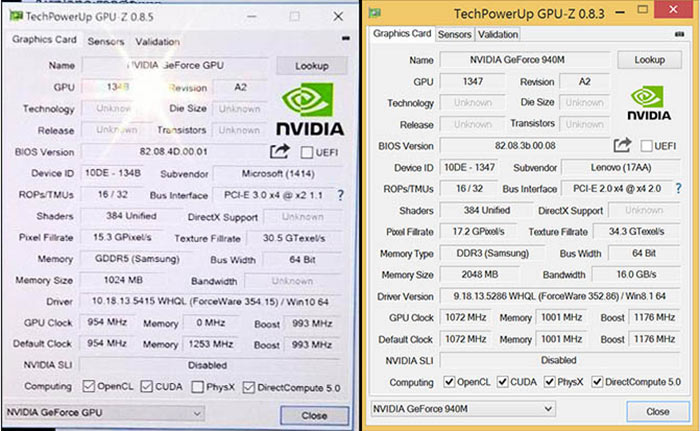 Clearly, they are very similar but not exact. The biggest difference seems to be that the Surface Book only has 1GB of memory as opposed to the 2GB offered in a “stock” 920M or 940M.

Another Redditor who seems pretty technically savvy (or, maybe, is just good at looking up stuff on Wikipedia) commented with the following:

“It’s the same chip as the 940M, GM108, but with GDDR5. GDDR5 can do about twice the memory transfers of DDR3, which is why it’s used in graphics cards. The reason why there’s only 1GB of GDDR5 seems to be that the GM108 can only connect to a single RAM chip, and the current maximum density for DDR3 is 16GBit (2GByte) and for GDDR5 is 8Gbit (1GByte).”

And we can thank yet another Redditor who compiled the following information about the Surface Book GPU and 3 comparable NVIDIA chips in a separate thread.

Surface Book GPU Details: So What Does This Mean?

Well, it means that, theorically, the GPU in the Surface Book fits between the NVIDIA 920M and 940M which probably makes it better than the GPU in a Macbook but until we can torture one with various benchmarking utilities, we won’t know for sure by how much.

However, I have every reason to believe that it will have excellent graphics performance. It won’t compete with a high-end gaming rig but it will probably hold it’s own with just about any laptop on the market today. Good enough for me!