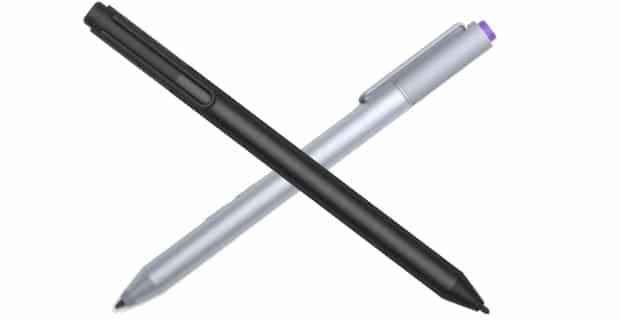 Let me give you the scoop on the new pen…

UPDATE: After receiving the Surface Pro 4, I examined the pen again. There is, indeed, a side button there. It is hidden, at the lower end of the long bar that runs down the front of the pen. You have to click it in the correct area (at the end) to notice that it is there.

As you can see in the picture below, the new Surface Pen (bottom) is slightly bigger than the original Surface Pro 3 Pen. You can also see that it is lacking the two buttons on the barrel of the pen. Personally, while it changes the way I work with the pen, I won’t miss them since I often accidentally press one or both when I write with the pen on my SP3.

Note: Microsoft reports that there is a second button on the SP4 Pen: “access formatting options using the right-click button on the side”, however, when I used the pen, I didn’t notice this button…hmmm…

Its dimensions are 5.67 x 0.37 x 0.40 in. And it weighs in at 0.7 oz. This makes it both a bit bigger and heavier than the Surface 3 version of the pen but if feels more like a real pen. From a more subjective point of view, it’s weighted very well and it gives a great pen-paper experience.

The magnetic attachment system harks back to the original Surface pro and Surface Pro 2 days. At first I was a bit apprehensive about it because my experience with the Surface Pro was that the magnets were too weak and I would often lose my stylus. 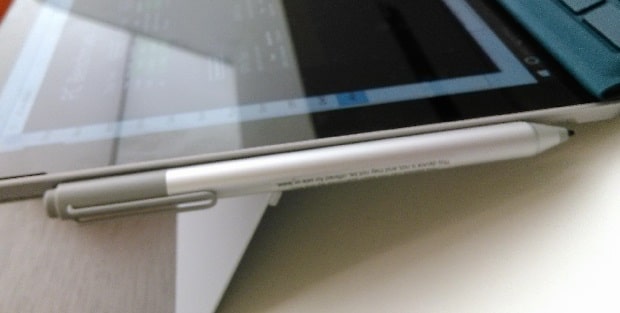 After playing with it, I’m happy to note that the new magnetic attachment system is much more secure. Even when I shook the SP4 in an attempt to knock the pen loose, it stayed firmly attached.

Don’t get me wrong, I would still recommend getting a physical pen loop to store the Surface Pen when it’s in your bag or briefcase because who want’s to risk losing $60? However, the magnetic attachment is really nice if you want to quickly stow your Surface Pen while you use they keyboard or touchscreen but. still have it close at hand.

If you’re more of a “black and white” person, you might find the technical specifications in the table below interesting as well.

To me, the interesting points are the backward compatibility and interchangeable pen tips so, let’s touch on those aspects next.

The new Surface Pen includes a Pen Tip Kit. The pen tips are 2H, H, HB, B – for a total 4 tips. This is very nice for artists since it gives them more “brushes” to use with programs like Fresh Paint.

For the majority of users, it’s still beneficial because, on occasion, folks have broken or worn down the old Surface Pen nub which often resulted in needing to purchase a whole new $50 pen. It will be nice when people can fix their (otherwise fine) pen for just a few dollars. 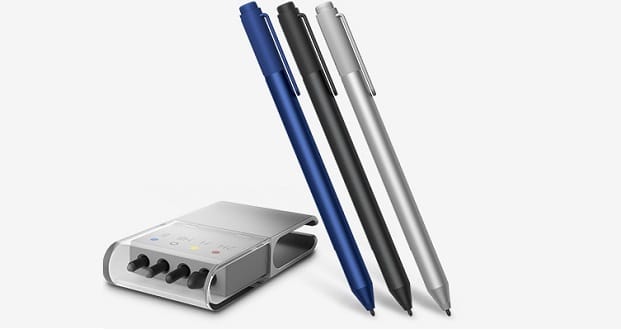 With the removal of two buttons, a few of you might be wondering how to do some common things with the new pen. I put together a short list for your reference below:

I was very impressed with the new Surface Pen. When I used the Surface Pro 4 and its new Pen, I was quite impressed. It handled, and felt, just like a non-digital pen or pencil – very impressive.

So, even if you aren’t planning on upgrading your SP3 to a SP4, you may still want to get the new Surface Pen for a “micro upgrade”.