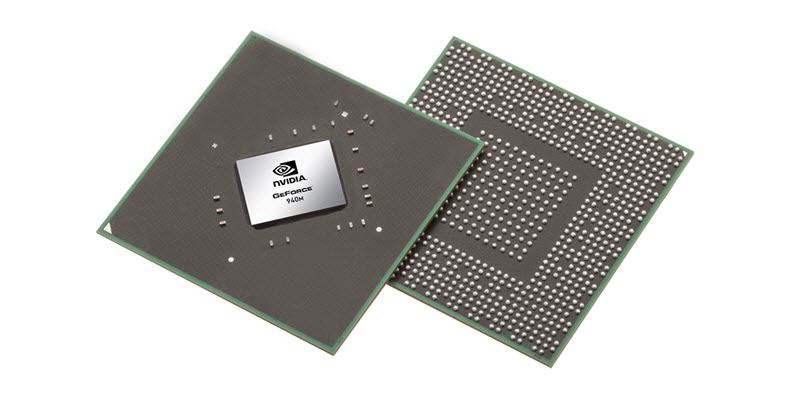 There has been countless number of reviews that have ran benchmark tests to determine if the dGPU is faster and if so, by how much, including our own article found here. But what makes it tick faster and how does it compare against other surface models especially vs the high-end Surface Pro 4 with Iris?

It is important to realize that the GPU unit in the Surface Book has its own power and cooling envelop. In case of integrated GPU setup, they are shared. And in case of integrated graphics versions of Surface Book and Surface Pro 4, the total TDP envelop of the processor is 15w. This must be shared between the integrated GPU and the CPU. So in case you run graphically intensive apps such as 3D games, the GPU will take up significant amount of that envelop, forcing the CPU side to throttle down to not exceed 15w. In plain English, the system runs at slower pace than it is capable of due to power and cooling requirement.

In case of our dGPU, both the CPU and the GPU will operate at its maximum designed capacity as both will draw as much current necessary to do their operations within their (higher) TDP envelop limits. Of course, this also means this combo is more power hungry. The dGPU is rated at total TDP envelop of 33w in addition to the processor’s 15w.

Clearly, Microsoft is not capable of designing and manufacturing their own GPUs. They do mention that it is based on a Maxwell processor, but customized. Maxwell is designed by nVidia and it is used in many of their GPUs right now, including the likes of GeForce 700 series, GeForce 800M series, and even GeForce 900 series. They are all manufactured using a 28 nm process.

This is quite a range of GPUs, so this alone isn’t enough to determine which GPU it actually resembles. There is a tool called GPU-Z that identifies the inner details of the GPU which can help us identify where this GPU sits.

Here’s what the GPU-Z app produces: 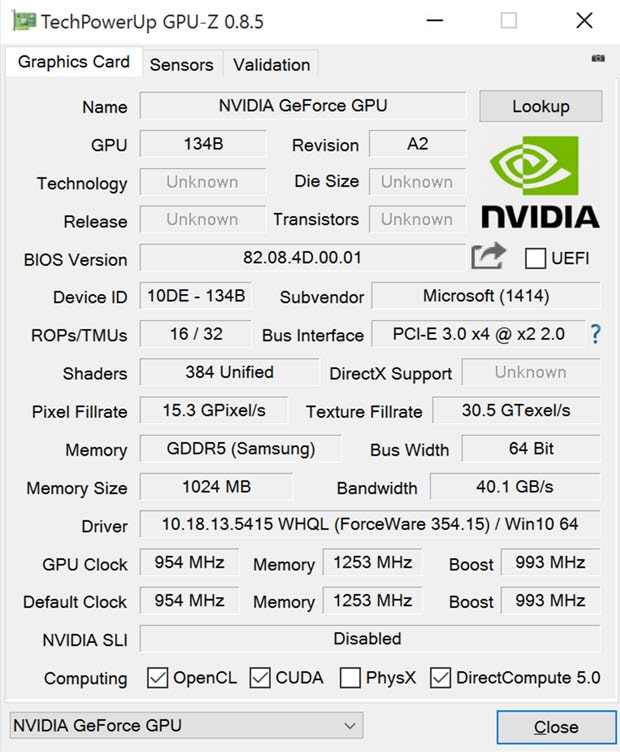 This isn’t quite a match against any of the existing nVidia design so Microsoft is correct in saying that it is a custom design. The closest is the nVidia 940M and looking at the numbers, the dGPU in the Surface Book is slightly under-clocked compare to the standard nVidia 940M. The dGPU holds the same number of shaders but it’s pixel rate is slightly lower at 15.3 GPixel/s vs 17.2 GPixel/s. Texture fillrates are slightly lower too, at 30.5 GTexel/s vs 34.3 GTexel/s. But it uses GDDR5 memory rather than DDR3 for significantly higher memory bandwidth. So even though the core is running at a slightly slower pace, I expect this setup to result in a slightly faster overall performance than a typical 940M setup.

Just as a comparison, here’s the GPU-Z report for the standard integrated GPU version (Intel HD 520) built into most of the Surface Pro 4s and non-dGPU version of Surface Book: 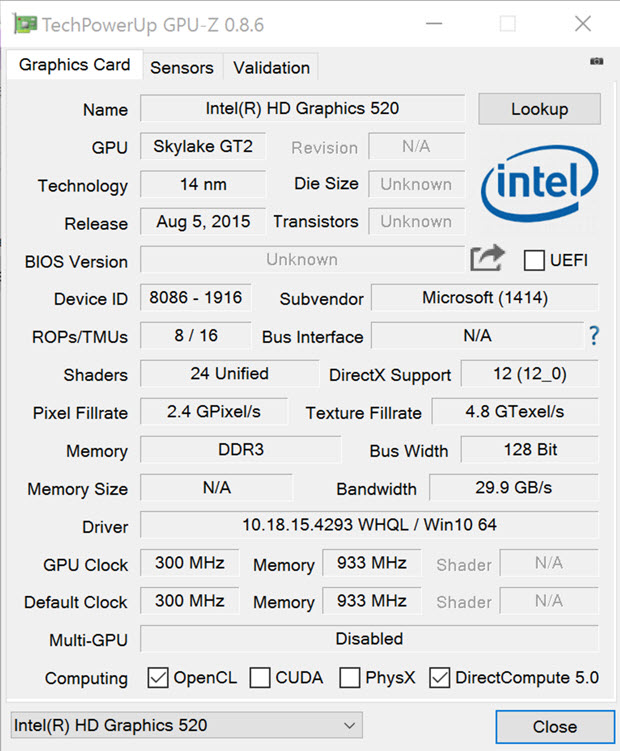 As you can see, the theoretical numbers are not even close and that is to be expected. But in reality, the differences aren’t as big as you’d expect as there are other bottlenecks within the system outside of GPUs.

How does it compare to other Surface devices?

Here are the GPUs used by each of the Surface devices with different levels of CPUs. Each number indicates their test results using Passmark G3D Mark numbers. G3D test suit runs two DirectX 9, one DirectX 10 and one DirectX11 tests:

Again, probably not what you were expecting.

I’ve looked around for some real gaming benchmark numbers and they too show that the two processors don’t show big gaps in performance. To be fair, Surface Book’s dGPU does appear to outperform the Surface Pro’s Iris 540 in most gaming benchmarks but the gap is surprisingly small.

What’s up with those surprisingly high Iris numbers in Surface Pro 4 i7 models?

How could an integrated solution (Iris) outperform (or closely match) the performance of a dedicated GPU unit? How could a portability-focused Surface Pro 4 model nearly match that of the GPU performance of the Surface Book which is clearly designed to handle higher powered GPU processors?

Lets look further into the Iris built into the 6th generation Skylake processes.

Compare to the “non-Iris” HD 520 model, the Iris 540 features twice as many execution units running at the same clock speed. Just as important is that the Iris 540 gets 64MB of eDRAM on the same die. The result is a surprisingly good performance out of an integrated solution which still consumes only 15w – the same as the lesser models.

Of course, just as with other laptops, if you push the system hard, they will throttle down and it is unknown how long the Surface Pro 4 with Iris 540 can sustain at a high performance level but still it is an impressive showing. And unlike benchmarks, gaming and day-to-day apps typically don’t continuously stress the system, so in real life, throttling might not be as necessary, hence the gap might be even smaller.

IMO, the first generation Surface Book sits at somewhat awkward position. It is positioned as an ultra portable laplet that can handle some light gaming and graphically intensive apps. At first, it sounds all good until you check out the GPU performance of the i7 version of the Surface Pro 4. It features a integrated GPU that consumes little power but more a less matches the graphical performance of the dGPU! Further more, this option is not available for the Surface Book – if you get the i7, you get the dGPU. If you detach, you get the non-Iris “less capable” HD 520. If you get the i5, you are stuck with once again, the HD 520.

There are other pros such as a bigger screen and a larger battery capacity but if those are not as important as portability, and if you still care about some decent GPU power, IMO, Surface Pro 4 is the way to go, but only if you get the i7 version.