Yesterday, I was able to get access to a couple of the new Surface 3 tablets for an extended period of time – thank you Microsoft Store manager at the San Juan store!

All (or almost all) of the other early hands on reviews (so far anyway) have been with the $599, 4GB/128GB Surface version. This makes sense, since Microsoft wants the reviewers to have the best experience possible and the extra RAM/storage will definitely improve performance and so they provide the higher-end Surface 3 as review units.

I tested the lower-end model. I feel that it provides a slightly more practical perspective, my hands-on testing was exclusively done with the $499, 2GB/64GB Surface version.

Personally, I think it’s better to look at the baseline version rather than the high-end version when doing this type of review, as it doesn’t risk setting as many false expectations for readers.

My first impression was, “wow, this is just like a smaller version of the SP3.” 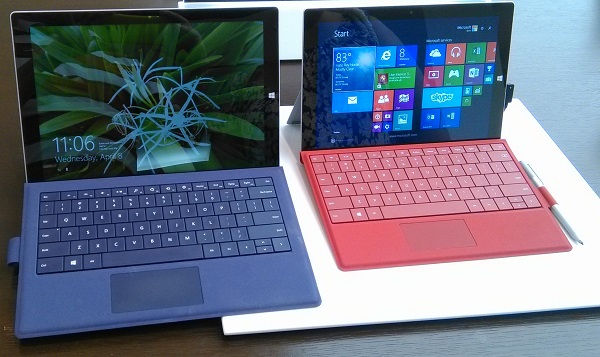 It felt similar when I held it and, except for the button arrangement and mirrored Microsoft logo on the back, looked like a 4/5 scale model of a SP3.

It was noticeably lighter than our SP3 but, still had that trademark “solidness” that the Surface line has demonstrated all along. All in all, it’s just what I’ve come to expect from Microsoft hardware – attractive and durable.

Surface 3 Hands On: Performance and Applications

The Surface 3 felt “snappy”. When I opened applications, there was little to no lag even with multiple applications open..

To better judge performance, I played a little bit of Surface 3 was definitely warm but not unbearably so.

However, if you’re a gamer (like me) be aware that the Surface 3 WILL NOT be something you will want to try to game with. It did fine with Windows Store games but, when I tried “real” games like KSP and Borderlands: The Pre-Sequel) it either choked or wouldn’t run them at all.

I also tried Internet Explorer and the installed Office 365 apps. They were snappy and there was no noticeable lag when I would open/save documents or cut/paste data. So, if you’re looking for a lightweight option to read email, surf the web, and run Office apps, the Surface 3 may be exactly what you are looking for. I have some benchmark test that I will share with you in the next post but overall, I felt the Surface 3 was snappy and responsive but, as you might expect, it didn’t quite measure up to the Surface Pro 3.

Surface 3 Hands On: Screen and Touch

The 10.8″ 1920×1280 screen was bright and clear. The touch screen seemed pretty accurate from the get go and I had no problems with touch or gestures at all. Everything was nice and responsive.

Surface 3 Hands On: Pen and Writing

Here’s where I found the first minor problem with the Surface 3…. When I used the Surface pen (which is the same as the SP3 pen) to take notes in OneNote, I discovered the palm detection wasn’t quite as good as the SP3.

In addition, I noticed a lot of what I started to call “ink leaks”. Basically, when I would lift the pen from the screen to make a punctuation mark or write the next letter/shape there was a tendency for the S3 to draw a line (or parts of a line) between where the pen left the screen to where it touched the screen again.

The result was very much like using a leaky ink pen that dripped ink onto the screen as you moved to the next letter. In the shot below, you can see some of this ink leaking… 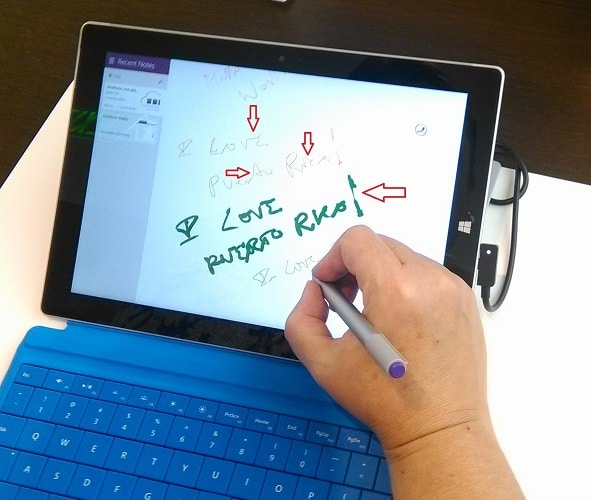 Fortunately, I think a driver update or two should solve the problem as it didn’t seem to be related to the hardware. Remember, these were pre-release units I was evaluating. One kind of has to expect some minor issues.

I found the pen accuracy to be very good. It was, at least on par with the SP3 pen so, ink leaking aside, I was able to write and draw accurately.

Oh, one more thing…. clicking the pen end button when the tablet is awake will start OneNote just like the SP3. However, when it’s asleep, instead of starting OneNote in “quick note” mode, it simply wakes up the Surface 3 (at least by default).

Personally, I found this to be an improvement in functionality.

The built-in speakers were decent, not great. Considering how compact they had to be in order to fit inside the thin 8.7mm case, they are about as good as you could expect them to be, so roughly the same as the Surface 2 (Joanna’s baby Surface) we have.

The cameras (especially the back camera) are pretty good but not great. They will definitely do what you need them to do, though. Below is a picture of a Surface 3 taken by another Surface 3. Just click to see the full size version. 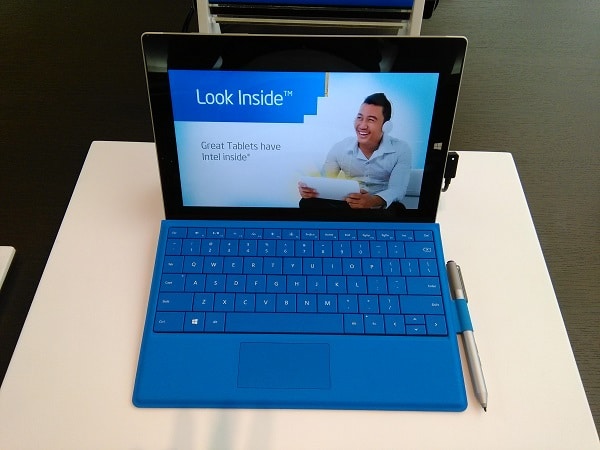 As you can see, the picture is fairly sharp but, there’s a little bit of graininess. However, for the types of pictures you should be taking with a Surface, the cameras are just fine.

If you’re planning on using your Surface as a camera a lot, check this article out first. It’s about the iPad but works for the Surface as well. 😉

All of the ports are along the right hand side (or bottom in portrait orientation) of the device. None of the ports seem to get in the way of the others but, if you get the keyboard cover, make sure you attach the pen loop to the LEFT side or bottom. 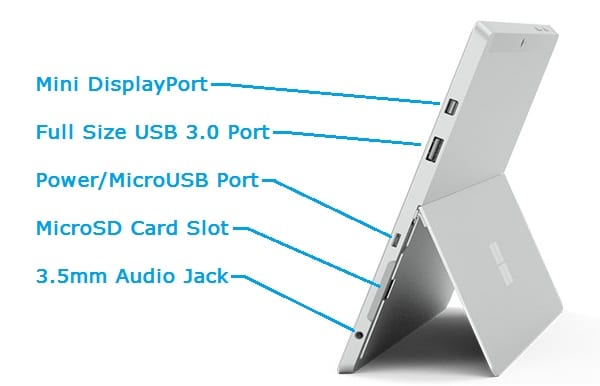 Whomever attached the pen loop on the demo units I played with put the pen loop on the right side and, of course, when the cover was closed, the pen interfered with port access. This is especially annoying because the new power charger sticks out a bit and kept bumping into the pen. 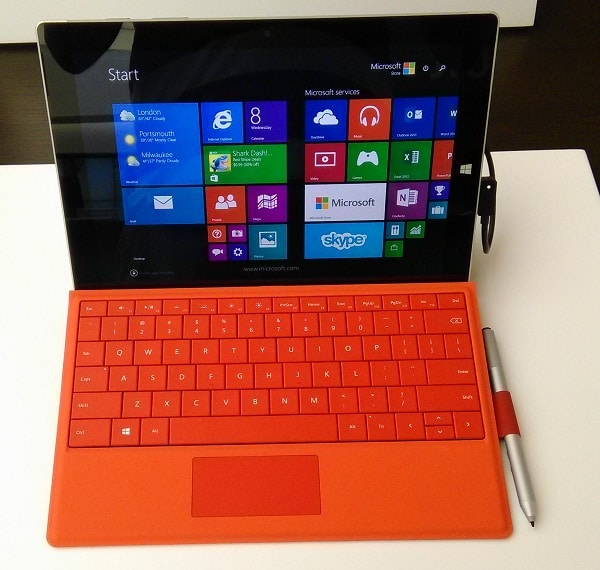 Something else I wasn’t sure about was the volume and power button arrangement. They are right next to each other on the top of the device and, at least once, I accidentally hit the power button when trying to adjust the volume. 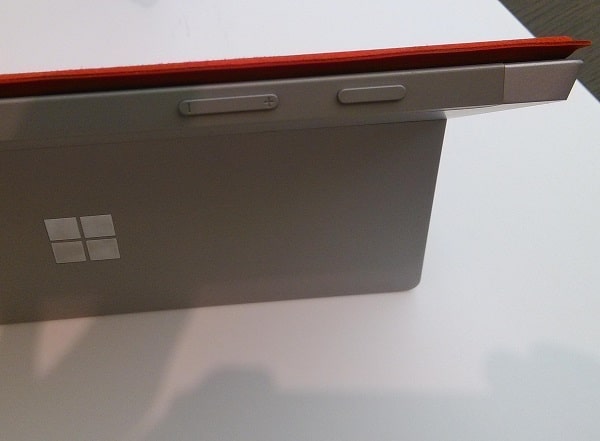 Of course, it could have just been my big fingers or the fact I’m still getting used to the new arrangement…

The 3-position kickstand felt crisp and the third setting was really nice for me when I was standing at a table using the Surface 3 but it’s not nearly as nice as the dynamic kickstand offered by the Surface Pro 3. In the shot below, you can see the Surface 3 kickstand in the 3rd position. 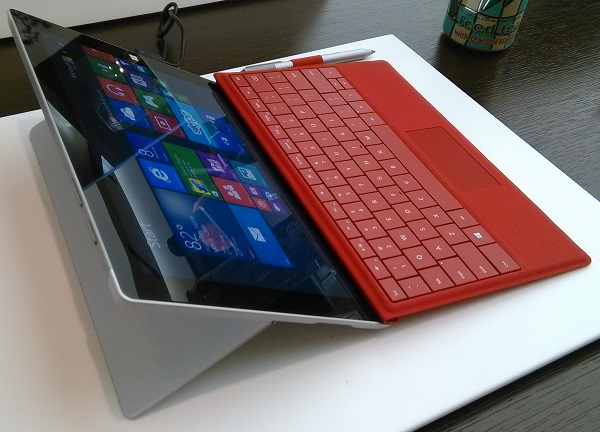 On the plus side, those 3 positions are 3 more than an iPad offers….

The Surface 3 keyboard cover was a nice surprise. The keys were crisp and felt good when pressed. The back-light worked well but, there was a bit of leaking from around the keys. Nothing major but, worth mentioning. 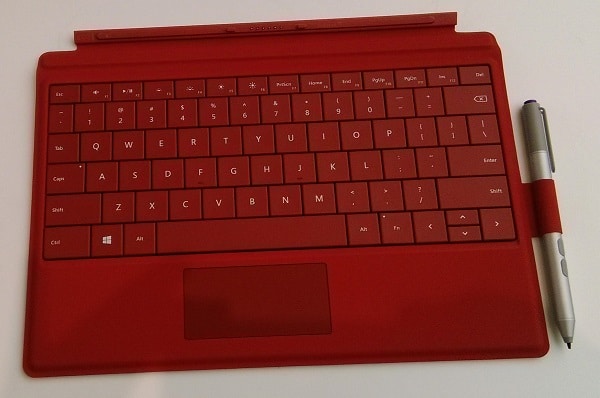 The trackpad was a bit too small for me but, unlike some of the earlier versions, felt smooth and worked very well. In addition, there was considerable “give” when I clicked something. This gave me the tactile feedback I like to be sure I clicked or double-clicked.

If the above list of things sounds like what you do, you’ll probably love a Surface 3 (especially if you get the $599 version).

However, if you like to play hard-core games or you need to run processor or graphics intensive apps for your work or hobby (you know if you do) then you won’t like the Surface 3 (even if you get the $599 version).

Up next, a post on performance benchmarks on ran on the Surface 3 – coming very soon.