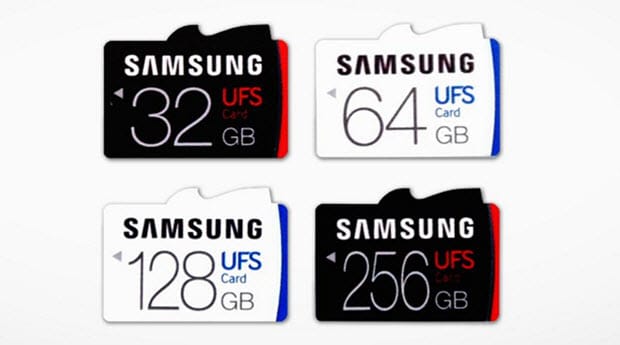 Samsung has just announced UFS memory cards. Is it relevant to us Surface Pro and Surface Book users?

Universal Flash Storage (UFS) is the latest memory card standard with many enhancements from the existing standards. As usual, it promises faster speed and larger maximum capacity without growing in size physically. Samsung is the first to announce cards based on the new standard and others will surely follow quickly.

What is Universal Flash Storage (UFS)?

In fact, UFS isn’t memory card standard. It is a memory storage standard which means UFS memory can be used in any storage formats and devices. Samsung has been producing this type of memory for a while now and some of their recent phone models even use them as their main memory. It does not need to be packaged as a external memory card.

Current king of performance in the microSD world would implement the UHS-II class standard, and it would feature a theoretical maximum full duplex speed of 156MB/s. Full duplex meaning two directional communication. The UFS standard allows for up to 530MB/s. In half duplex mode (single direction communication), this speed doubles in both cases so the relative performance gap still remains the same.

That’s a significant bump up in speed. 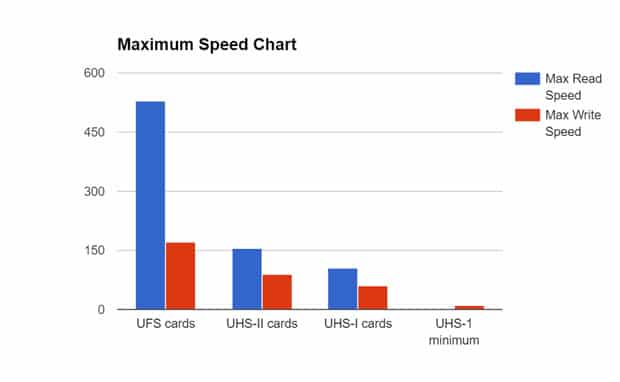 Majority of the cards currently sold only requires 10MB/s of write speed to claim it is UHS-I/Class 10 compliant. So we are still long way from hitting even the theoretical maximum speed of UHS-I for the mainstream (cheap!) cards.

Also, the above chart only shows the transfer speed which is only half of the equation. The access time is as important if not more – that’s the time it takes to find a piece of data stored in the card. If you recall, solid state drives feel far faster than conventional hard drives because of their much faster access time, not their raw transfer speed.

And finally, this is how the different class is currently organized: 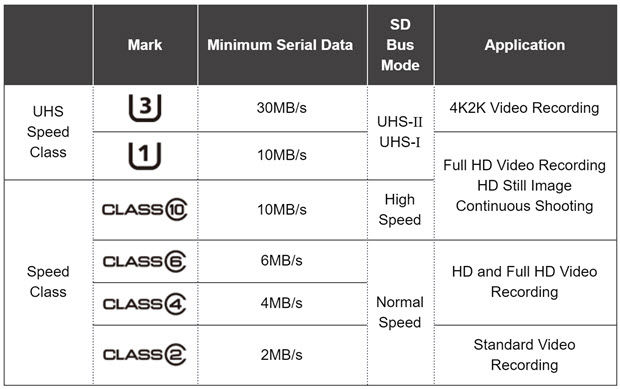 So we currently have enough speed (at least theoretically) covered all the way to 4K video recording. Anything more than that, for now, is just a bragging right. Unless you frequently copy large files frequently, perhaps photo/video professionals.

Usually, better performance in electronic world means higher power consumption. But in this case, the reverse is true. 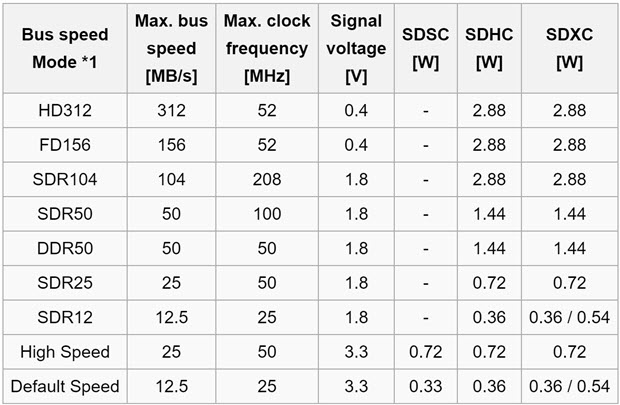 As you can see, the maximum power usage allowed by the fastest bus implementations are 2.88W. How about the UFS? 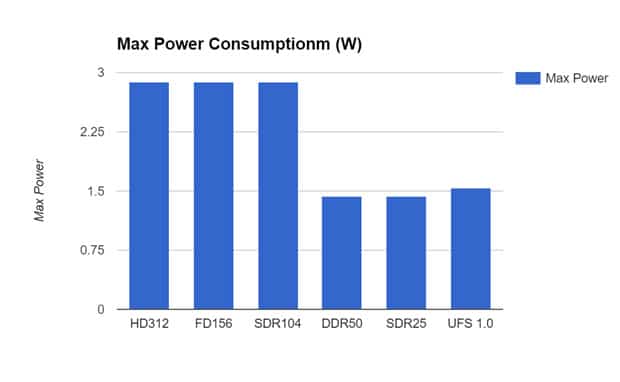 It does consume a bit more than much slower standards but compare to today’s higher speed cards.

Part of the UFS standard also defines what they call “Unified Memory Standard”. This allows a device to extend its main memory by using the UFS storage which could be connected externally by a port. Imagine increasing the capacity of your RAM by adding a sdcard (well, a UFS card)!

In reality, we are not quite there yet. Although the UFS promises very fast speed by memory card standard, it is still significantly slower if you compare it against RAM memory built into laptops such as the Surface Pro 4 and the Surface Book. Still, there could be some interesting application for this type of bus system if the Operating System is aware of it.

To certain extent, today’s OS does this already by implementing virtual memory – when RAM is all used up, part of your storage device is used to unload some data so that some of that RAM can be freed up to continue its operation. But this method has significant overheads. Perhaps this method can improve on this front.

Is it backward compatible with existing devices?

Have a look at the physical appearance: 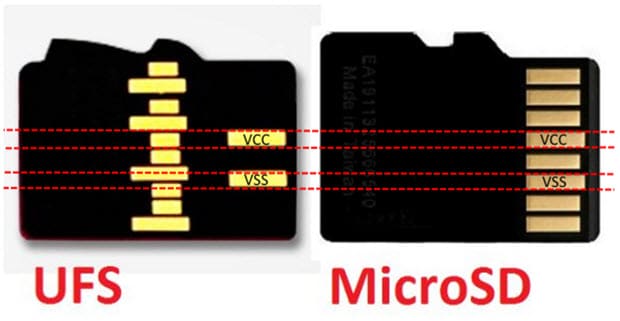 Clearly, UFS designers have designed the location of each contacts so that you can build a new device that can support both the UFS and the existing microSD card contacts. But no luck to any of the current Surface Pro and Surface Book users.

So my new wishlist to Microsoft now includes “please add UFS slot to the Surface Pro 5 and Surface Book 2”!