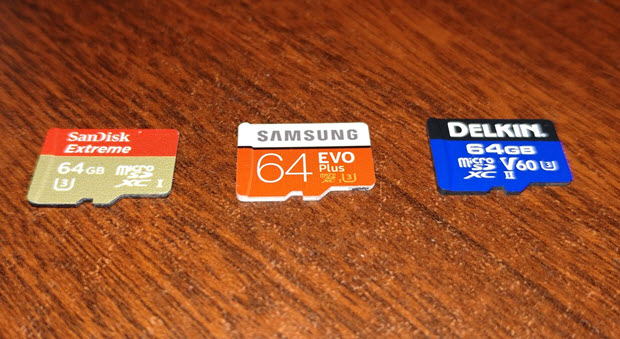 Which is the best microsd card for the Surface Pro?

Time for a new refresh. Since publishing the last ‘best microsd card‘ article, the market dynamics have changed, significantly.

Back then, the Class 10 cards were still popular, and the UHS-1 cards were gaining momentum quickly into the mainstream segment.

So how does the market look now?

This is probably a good place to go over the basics of the SDCard standard.

Do you know exactly what it means when the label says “Class 10”? UHS-1? What about that U3? (that’s the little number ‘3’ written inside a bucket ‘U’)

This is the table that summarizes all this in a simple format:

In summary, a Class 10 card is equivalent to a UHS-1 card. A V60 card outspecs any UHS-3 class cards. A V90 card holds the highest possible spec as of today.

Also keep in mind that the write speeds are minimum – manufacturers can always go well beyond these speeds if they choose to. So it is possible for a lower spec card to outperform a higher spec one.

Now then, what is a Video Speed class?

Video Speed class is a relatively new standard. This matters now because video recordings have skyrocketed in terms of popularity. Here are what those mean:

So even if you are frequently recording 4K videos, a V90 card is not needed. But if you want the fastest possible card now, those are available, albeit very expensive.

Now we are ready to move on to the benchmark tests. In this comparison, I’m only going to use cards that are rated higher than UHS-1 – price difference is too small to justify buying these slower cards. We have already proven that UHS-3 cards vastly perform better than UHS-1 cards in the Surface Pro platform.

All of the benchmark tests are performed on the Core i7 version of the Surface Pro.

We have 4 cards in this comparison test. All the cards have minimum specs of UHS-3. If you want to see the older article with older cards, please read this article.

This is the old favorite. Compared to older UHS-1 cards, the SanDisk Extreme performed far better. This will be the baseline in which all other cards will be judged on.

This is Samsung’s UHS-3 version of their EVO line-up. On paper, it has pretty much identical spec as the SanDisk Extreme, so the expectation is that it will perform at the same level as the SanDisk.

This, once again, is a UHS-3 class card. So what does the name ‘Pro’ give you? Looking at the packaging, the card is quite weather proof, including water, temperature (really!), shock, and X-ray… The packaging states that now it confirms to the V30 class, but we all know that the V30 is equivalent to the UHS-3 class, so this is just a marketing message.

This is an odd-ball of this line-up, in a good way. It is the only one that is rated V60 class – meaning it is a class above the rest. Let’s hope that it actually performs at this level. Oh, and despite their lesser known brand name, they offer a lifetime warranty.

Now on to the tests…

ATTO Disk benchmark is a tool that measures the maximum read/write speed of any storage device. The tool produces a line per each test run where the size of the block is increased on each run. For this test, the block size varies from 512 byte (very small!) to 64MB (somewhat large). Generally, the speeds tend to peak out at around 512kb block size which is smaller than one MP3 song. So if your main interest is to store music/movie files, then larger block sizes should interest you. But if you intend to install apps on the card itself, then the seek time is more important than the transfer speed hence small block size gives you better indication on how it may perform in those conditions.

These tests allow overlapped I/O (multiple read/writes at the same time) at the depth of 4.

Hereâ€™s how the cards fared using the ATTO tool: 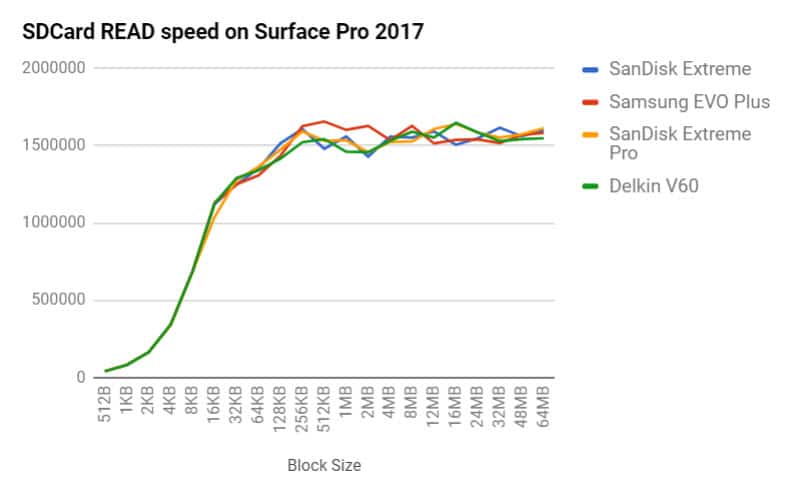 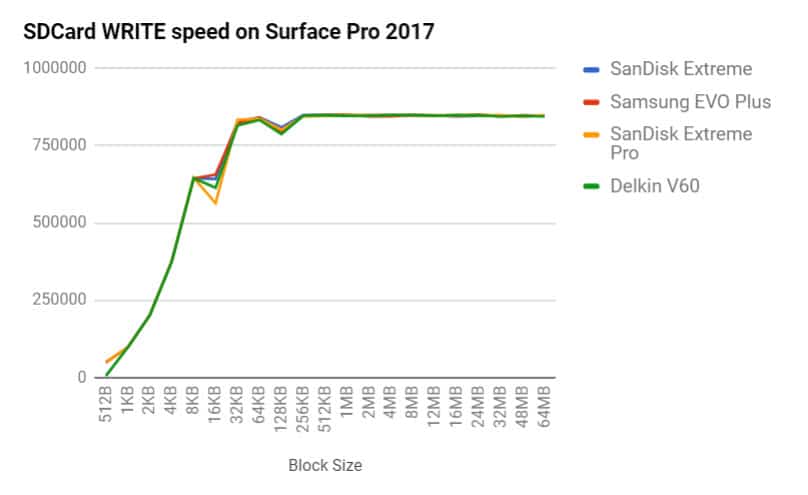 Well, what a disappointing set of results… Disappointing not because the cards performed badly, but rather the app failed to distinguish one card’s performance over the other. Clearly, all of these tests are no longer bottlenecked by the performance of the cards anymore.

Just as a comparison, older cards didn’t come close to the results produced by these cards: 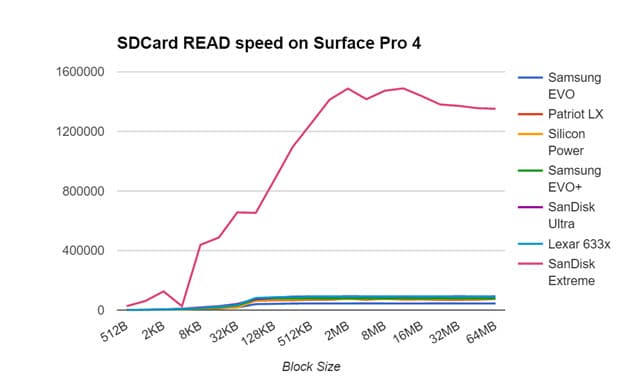 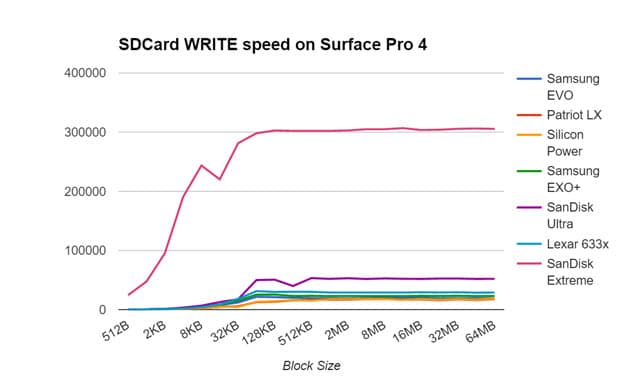 We need other benchmarking apps to truly measure the differences between these cards.

Here are the results for each card… 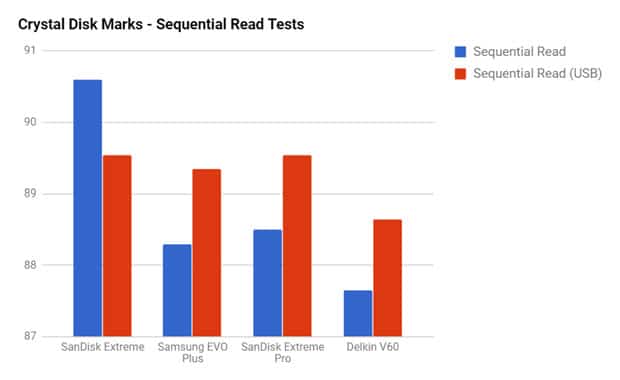 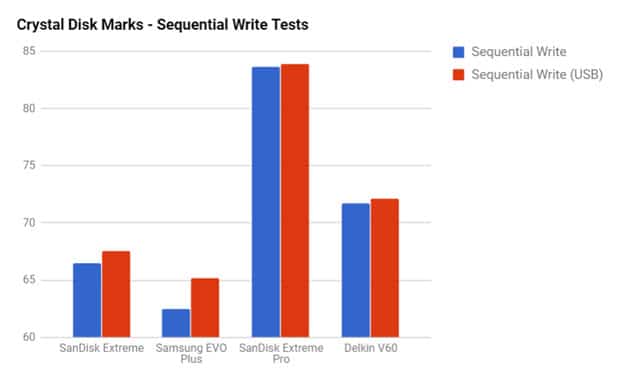 In a nutshell, this is yet another set of disappointing results with no obvious patterns. I ran the same set of tests using a USB 3.0 adapter, just to make sure that the microUSB reader in the Surface Pro wasn’t the bottleneck, and the above proves that this isn’t the case. Differences are there but percentage-wise, they are negligible.

Based on Crystal Disk Benchmark, if you care about the read speed, then no single card really pulls ahead of this pack. If you care more on the write speed, the SanDisk Extreme Pro does this better than all other cards by a good margin. Yes, this card even outperformed the V60 card from Delkin.

I had to add one more storage test, since most of the results so far didn’t really show much differences between these cards.

The above results are measured in seconds, so lower number means better performance, except for the overall score (in red), in which case, higher number means faster.

(Also, note that the SanDisk Extreme Pro could not complete this test which runs for about 3 hours. I tried it 3 times and it failed all 3 runs)

In this test, SanDisk Extreme performed slightly better than Samsung EVO Plus and surprisingly, both cards performed way better than Delkin V60 card… So much for the high hope on the V60 card…

So, which is the best microsd card for the Surface Pro?

The simple conclusion here is that the best card on paper doesn’t always work out for everyone. Delkin’s V60 class spec should outperform other UHS-3 class cards but that was not the case, whether the Surface Pro’s built in microsd card slot was used or a USB 3 adapter was used. Obviously, this is not the best microsd card for the Surface Pro.

Furthermore, all UHS-3 cards showed nearly identical results across the board. Since both SanDisk Extreme and Samsung EVO Plus performed nearly the same, I would go with either. If you choose to get the Samsung, make sure that you get this card, and not the other one which is similarly labeled as ‘Evo+’ which is a UHS-1 card.

As usual, if you have any further suggestions, please comment below.