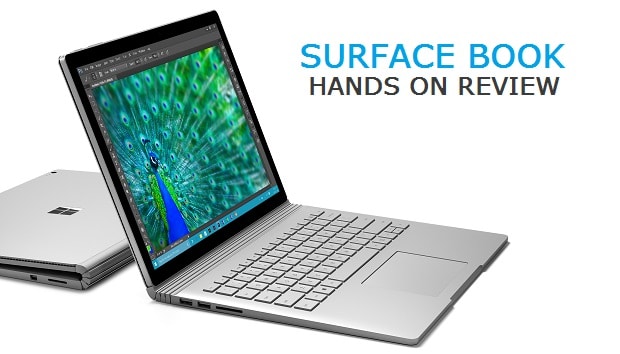 I just got my Surface Book yesterday and after playing with it overnight, I have the following first impressions for you and not all of them are good.

You basically get three modes with the Surface Book:

All three modes work really well for what they are and I can see a use for each.

One thing about the Clipboard mode, though; the Clipboard portion is very light and has the same well-built feeling we’ve come to expect from the Surface line of devices. However, it’s lacking a kickstand. While this may seem like an odd thing to complain about, it means that you always have to be holding the Clipboard when in use. Otherwise, you need to reattach it to the keyboard portion or lay it flat on a table.

A minor complaint to be sure but, I felt it was worth noting.

The hinge is pretty cool and feels solid but you DO NOT WANT TO OPEN OR CLOSE THE LID IN YOUR BARE LAP!!!!

This is especially true if you’re wearing shorts as the hinge will pinch or pull hair on your bare legs. It’s not super painful but it doesn’t feel good. Joanna says it feels like an Epilady hair remover. I never used one of those but I now have a small strip on my legs where the hair has been removed quite effectively, so I’m guessing her description is pretty accurate – wink 🙂

Of course, during my testing I just had to fire up a couple of games. The one I’m hooked on at the moment is Kerbal Space Program (KSP). In addition to having the opportunity to design, build, and launch virtual spaceships – which is every geek’s dream – it’s also a fairly physics-heavy simulation of things like aerodynamic forces, orbital mechanics, and real-time 3D rendering. As such, it can really push a machine to the limit.

An SP3 with its i5 and 8GB of RAM had a difficult time dealing with a large space station I had built. It was only getting about 5 FPS (Frames per Second) when I would pan around the structure in-game. I even had to reduce the graphics quality to as low as it would go to get that.

However, with the i7 8GB Surface Book, I’m getting full-motion video (at least 30 FPS) with the graphics turned up to as high as they will go.

The Surface Book did get hot while I was playing….. err… testing KSP and the fans did kick on but, given the fact that I was pushing it pretty hard, I’m OK with that. Other than when I was playing KSP or running some graphics benchmarks, the fan did not kick on and the keyboard portion was cool to the touch.

The Clipboard portion, however, would get a little warm at weird times. For example, it would start heating up while I was testing the cameras (more on that below) and even gave an error stating it had to close down the camera app because my device was too hot one time.

I think there’s going to need to be a firmware or driver patch to address it soon.

The screen is AWESOME!! It’s bright and sharp. It’s also huge. In the picture below, you can see Joanna’s old SP3 sitting on top of the clipboard portion of my Surface Book: 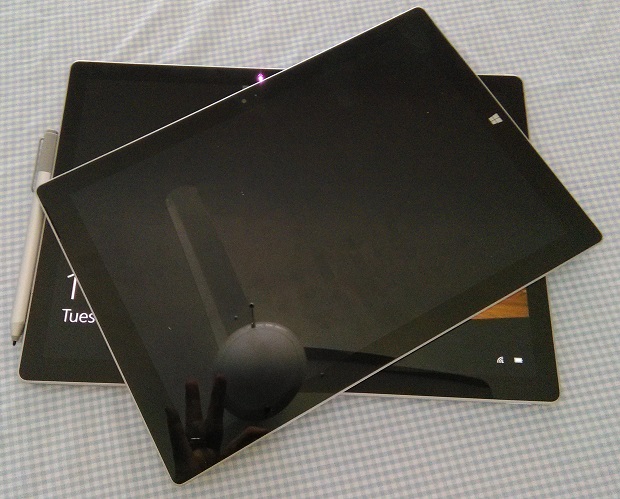 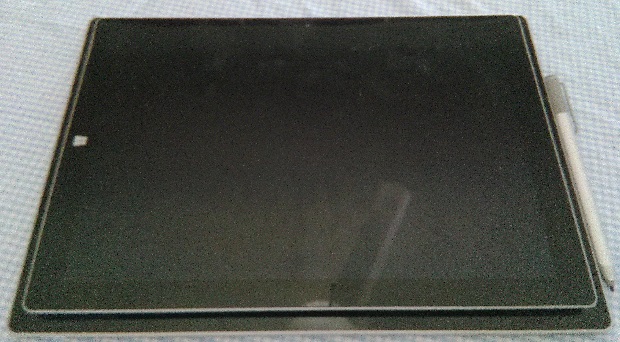 As you can see, the screen on the Surface Book (the non-bezel portion) is almost the same size as the entire SP3. Nice, huh?

There is one downside to this awesome screen in that the icons will be kind of small when it’s running in it’s native resolution of 3000 by 2000 pixels, however, you can go into display settings and adjust it to make everything is easier to see.

The keyboard has a nice backlight and the keys feel really good when typing. The key travel is consistent and “crisp”. You can’t ask for anything more.

The touchpad is big and responsive. It gives a nice tactile and audible “click” when you press it. The only (minor) complaint I have is that it shows fingerprints more easily than the rest of the device.

You detach the keyboard by either tapping a control in the system tray or by hitting the Surface Detach key on the keyboard. There’s a slight delay then you get an on-screen message saying you can detach the Clipboard as shown below:

Along with the on-screen prompt, a little orange light on the Surface Detach key illuminates to let you know it can be detached. All in all it works pretty well but there was yet another minor annoyance I found…

If the battery is under a certain percentage of charge (around 20%) the device will refuse to detach the Clipboard. You’ll get a message like the one illustrated below:

Reattaching the Clipboard is pretty simple. You do not have to hit any buttons before reattaching. Just line up the tabs and slide it back into place. You’ll get an “attached” message that looks a lot like the “Ready To Detach” message pictured above.

The locking mechanism automatically engages to keep it from falling off the keyboard portion.

Overall, it all works smoothly.

While the front-facing camera is working great, I couldn’t get the rear-camera to work at all for still photos. It would capture video just fine but it refused to capture still images.

In addition, there were a lot of screen artifacts when I moved the camera around -they were quite annoying. The problem with the rear-camera persisted when the Clipboard portion was detached. this tells me that it’s either a problem with the camera or Windows 10 and not some weird issue with the dGPU in the keyboard section.

I had an opportunity to play with another (i5) Surface Book a while back which did not have this camera issue, so I was starting to wonder if my Surface Book is defective, but Joanna is having the EXACT SAME camera problem with her Surface Pro 4!!!

We contacted Microsoft Support about it and, it seems the camera issue is OS-related and they’re working on it. Hopefully, Microsoft will have a fix for this annoying issue soon.

Using the camera to log me in via facial recognition is pretty cool. However, it’s also a little creepy how well it works.

If it just glimpses your full face, it will log you into your Surface Book. However, you can fool it by covering your mouth, nose, or one eye. Wearing or not wearing glasses, however, won’t fool it. Also, in case you’re wondering, you can’t seem to fool it with pictures of someone. We tried a few times to fool it with different photos of me but it was really good at only logging in when it saw the “real” me.

I’m not a conspiracy nut but, after my Surface Book logged me in twice when I just walked past it sitting on my desk, I’m starting to wonder if “Person of Interest” is more science and less fiction.

I turned it off.

The charging connector works well and can be used to charge just the Clipboard portion by plugging it into the longest slot on the bottom of Clipboard where it connects to the keyboard. It’s not obvious that this will work but, it does.

The included power supply is pretty fast at charging the device too. It managed to charge my Surface Book from just 4% to 100% in just a couple of hours even though I was using it at the time.

Also, the charger is interchangeable with the SP3/SP4 which is nice, since it gives you a spare if you already own one of the other devices.

NOTE: this section was updated less than an hour after I posted it because I didn’t realize you could charge the Clipboard portion by attaching the power cable to the docking port and originally I – erroneously – said it couldn’t be done. Thanks to Anon for pointing out my oversight. It just goes to prove you can’t be right all the time. 😉

Overall, I’m *mostly* happy with the Surface Book. It’s powerful, flexible, light, well-built, and it functions as expected, minus a few early bugs. I’m really looking forward to stress testing the dGPU, which will look a lot like me playing video games for hours but isn’t. It’s science 😉

However, there are a couple of annoyances that Microsoft needs to address ASAP such as the rear-facing camera issue. Also, there are some issues that will probably never be addressed like the hinge “pinching” because it would require changes to the hardware itself.

Fortunately, these problems are relatively minor but they might be enough to put some people off of buying a Surface Book.