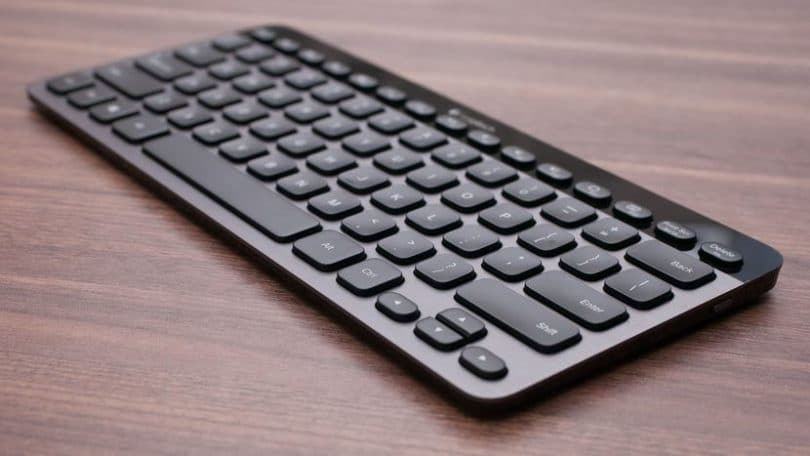 Tablets and smartphones have drastically improved over the years to the point where they've become the go-to technology for many of us. It's possible to take care of our emails and other documents through these easily transportable devices. And while this adds plenty of convenience in many areas, a phone isn't always the best place to type of a lengthy document.

Bluetooth enabled keyboards have then become the solution for this issue, allowing us to connect to our mobile devices when we need them—and stow away when our phone needs to operate as a phone. As the updated version of the K760 Solar Keyboard, the Logitech K810 has plenty of upgraded features. But does it provide a seamless Bluetooth keyboard experience?

What Is The Logitech K81​0 Keyboard Capable Of? 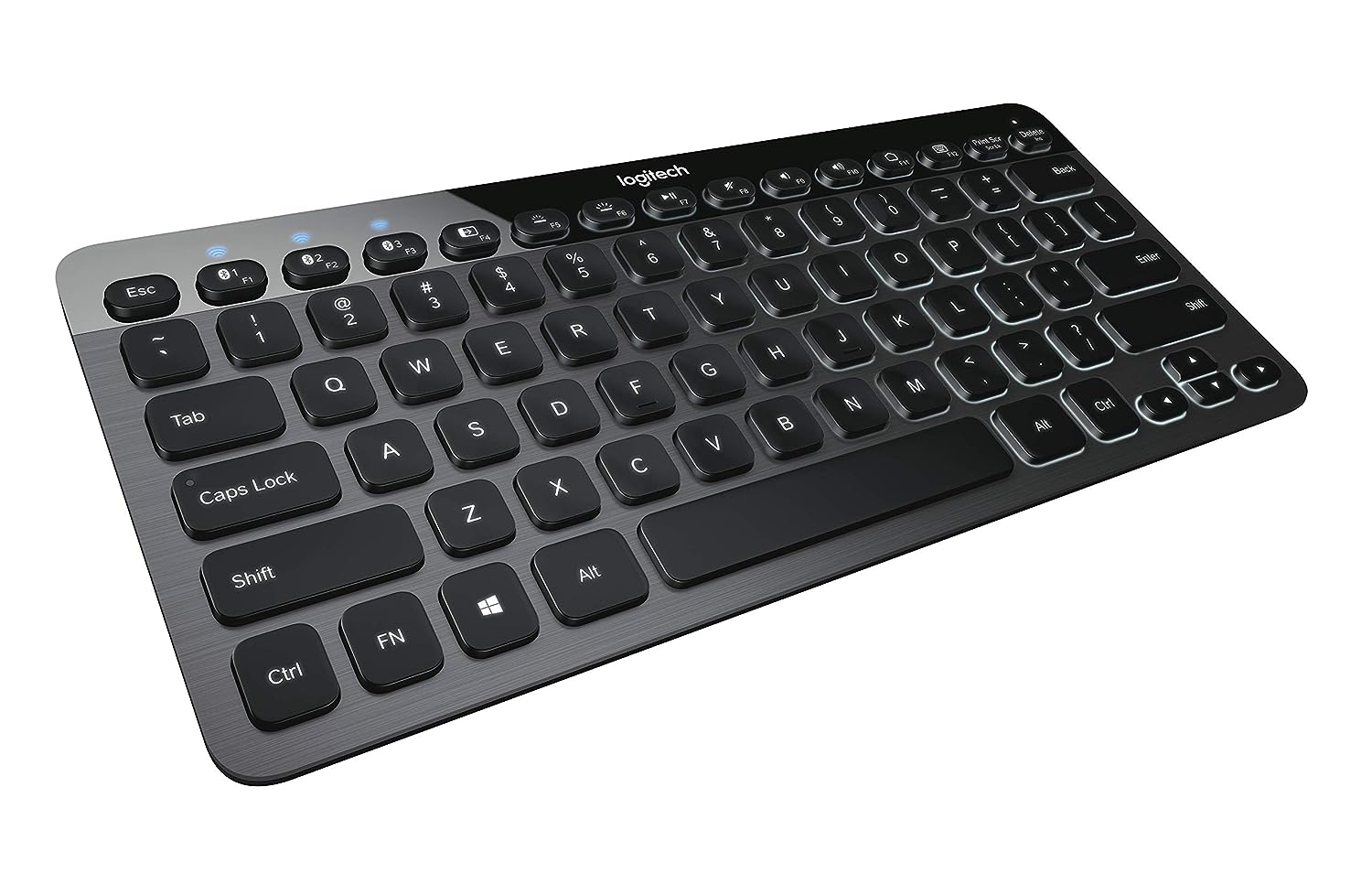 Logitech's K810 keyboard sees the inclusion of many new features while saying farewell to some things present on its predecessor, the K760. With multiple device pairing, battery upgrades, and more on its side, the K810 looks like it's a top contender in the world of wireless keyboards. So how well do those specs perform in reality? 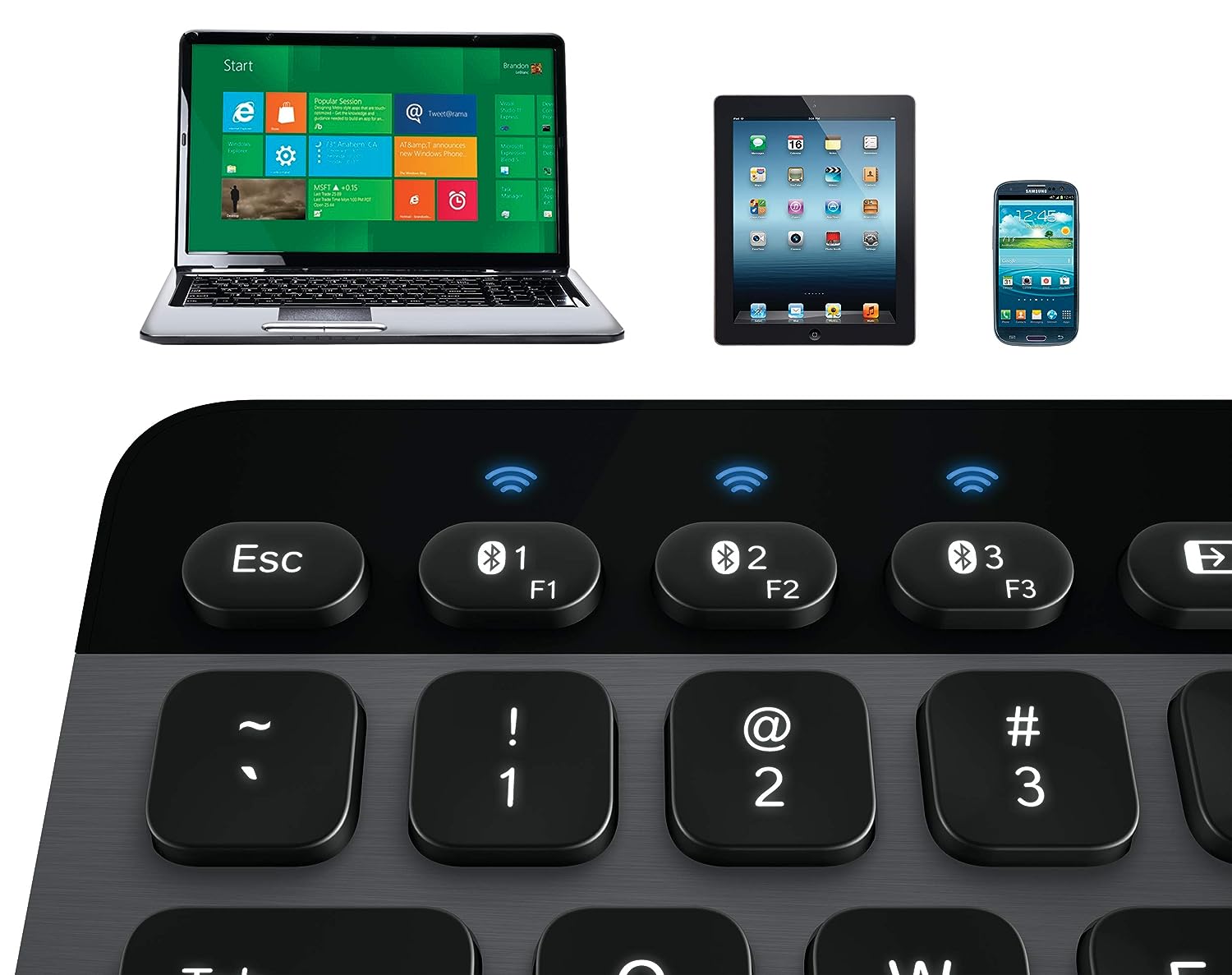 Like many other wireless keyboards, the K810 operates through Bluetooth connectivity, thus allowing it to connect to your chosen device. In turn, this means that you need that Bluetooth capability before you can sync it up, but most devices you want to pair with a wireless keyboard—like smartphones and tablets—already have those functions.

For those people that have multiple devices they want to use the K810 with, this keyboard allows for Bluetooth pairing with up to three devices. The connection is straightforward to perform, and it's also simple to switch between your devices as necessary. All you need to do is press a button to toggle, and then you can get to work.

The connection area lasts for anywhere within thirty feet of the keyboard. This distance is decent enough to give you some flexibility in your work setup, but you shouldn't need much more than that, assuming you want to see what's happening on your screen. 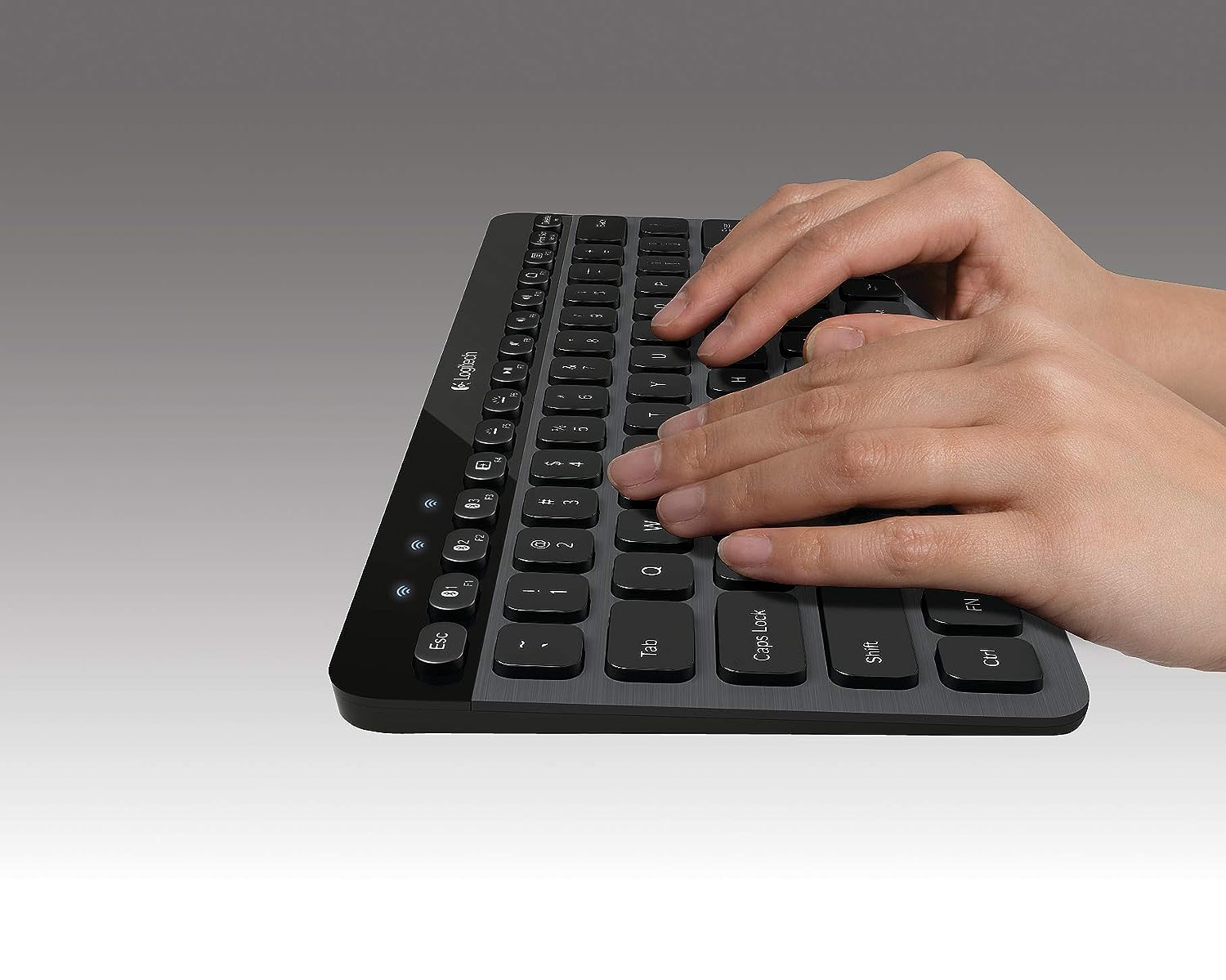 If you've ever used a wireless keyboard before, you may have experienced some issues with startup time, especially if you've left the device idle for a while. For ones that take a press of a key to boot, you may make some silly typos if you don't realize your keyboard is off before you start up the typing.

The K810 solves this problem by including a proximity sensor inside the keyboard. Once you move your hands close, the K810 powers up, meaning that you don't have to wait to start typing, In turn, that sensor can also tell when you're not working, allowing it to enter its power-saving standby mode until you come back. 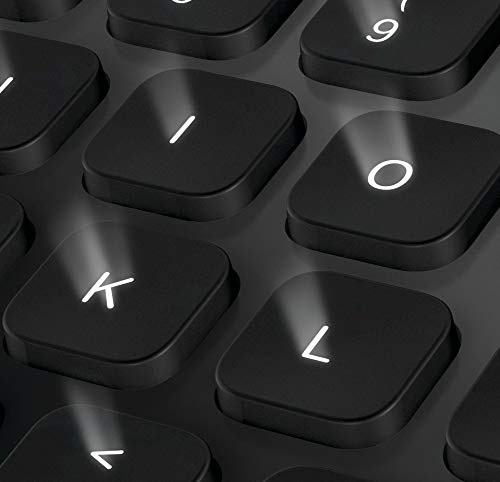 Backlights can be useful for keyboards, allowing you to see the keys quickly, no matter the lighting conditions. The K810 has four distinct settings: low, medium, high, and an "off." With these options, you can adjust as necessary, or even disable the light altogether. Depending on the places your work takes you, you might have a pleasant surprise at when the backlight comes in handy. 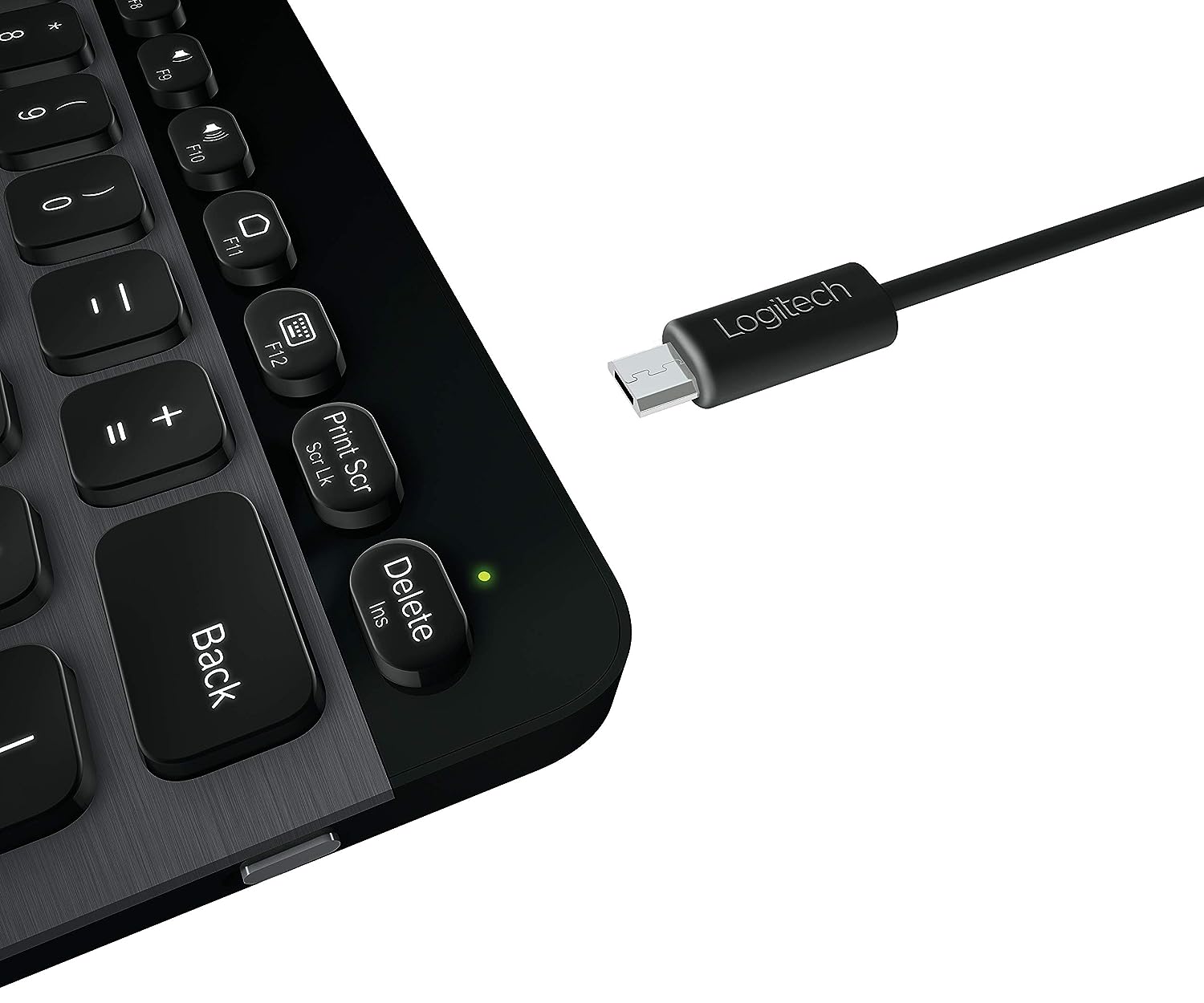 As with anything wireless, battery life is a major concern. With a wireless keyboard, you don't want to lose your momentum because the unit suddenly died in the middle of work. Thankfully, the K810's battery is both durable and long-lasting, allowing for long stretches of work. Again, the proximity sensing allows for better conservation of battery life as well.

As you'd expect, the battery is rechargeable. However, for those considering upgrading from the K760, you'll find that the K810 isn't solar-powered like its predecessor, and it instead charges through a USB connection, which you can use as you type. While this doesn't interrupt the usage, it may be a downside depending on what you look for in technology. 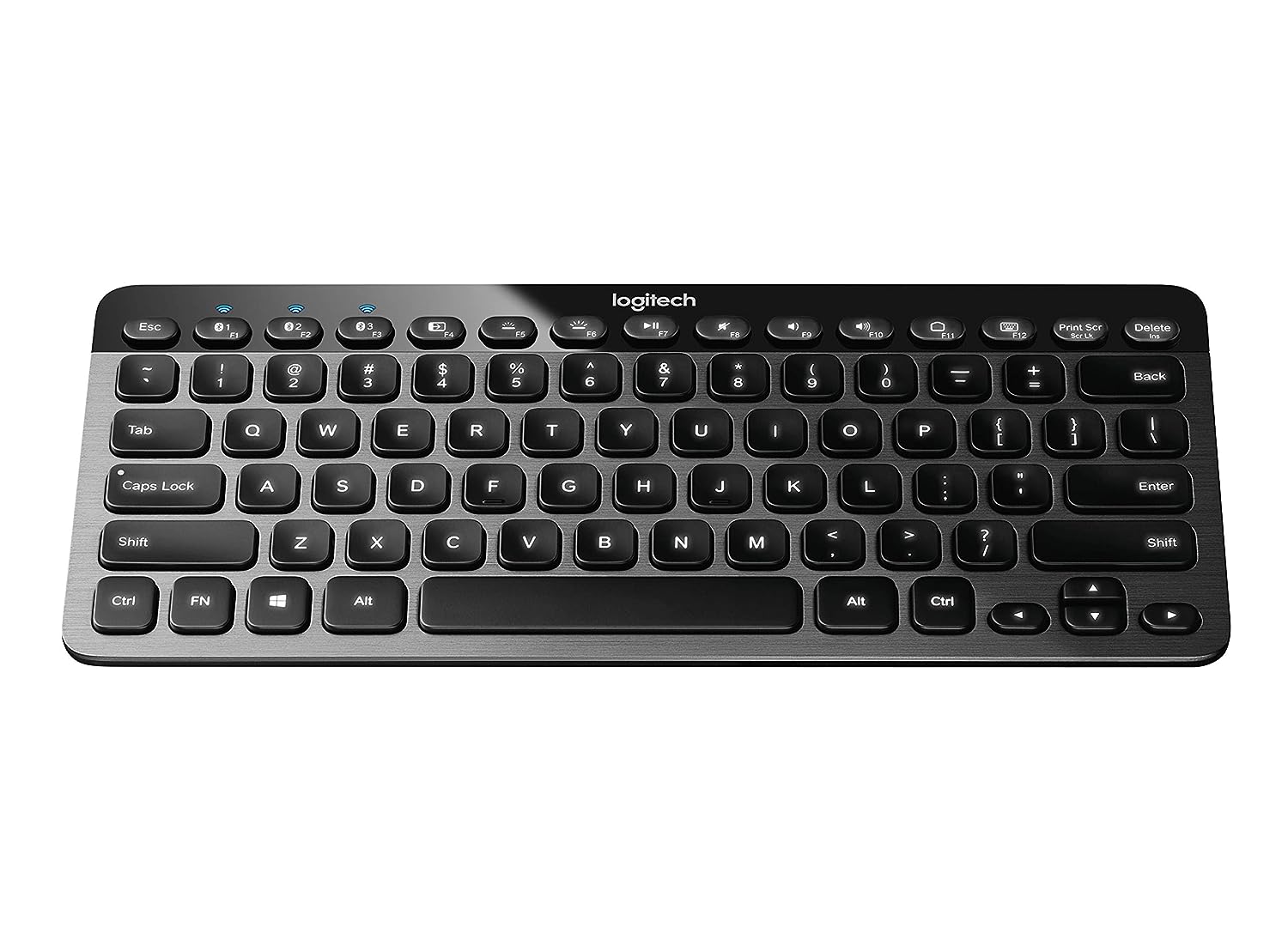 Since Logitech has designed the K810 with Windows computers in mind, you'll find that the Windows key is in the same familiar place. This key will allow you to access the Windows start menu on devices that have access to those functions. If you plan to pair your keyboard with a Mac, you may consider the K811, which has the iOS key instead.

However, just because the K810 has a Windows key, you don't only have to use it with matching devices. Products like phones and tablets don't make use of this key at all, so you can type as you see fit.

As for the rest of the keyboard, you'll find a QWERTY style keyboard with most of the same keys as full sized ones. However, because of the emphasis on portability in the K810's design, it's missing two significant features: a number pad and the keys to quickly navigate to home, end, page up, or page down. On mobile devices, this lack may not be much of an issue, but, for some users, the layout can be too constraining.

That emphasis on portable size has another potential drawback for some: the layout can be somewhat cramped for users. People who regularly use larger keyboards may have a harder time adjusting to the overall setup. Typing is smooth and silent no matter what, but comfortably reaching keys may be an issue depending on what you usually type on. 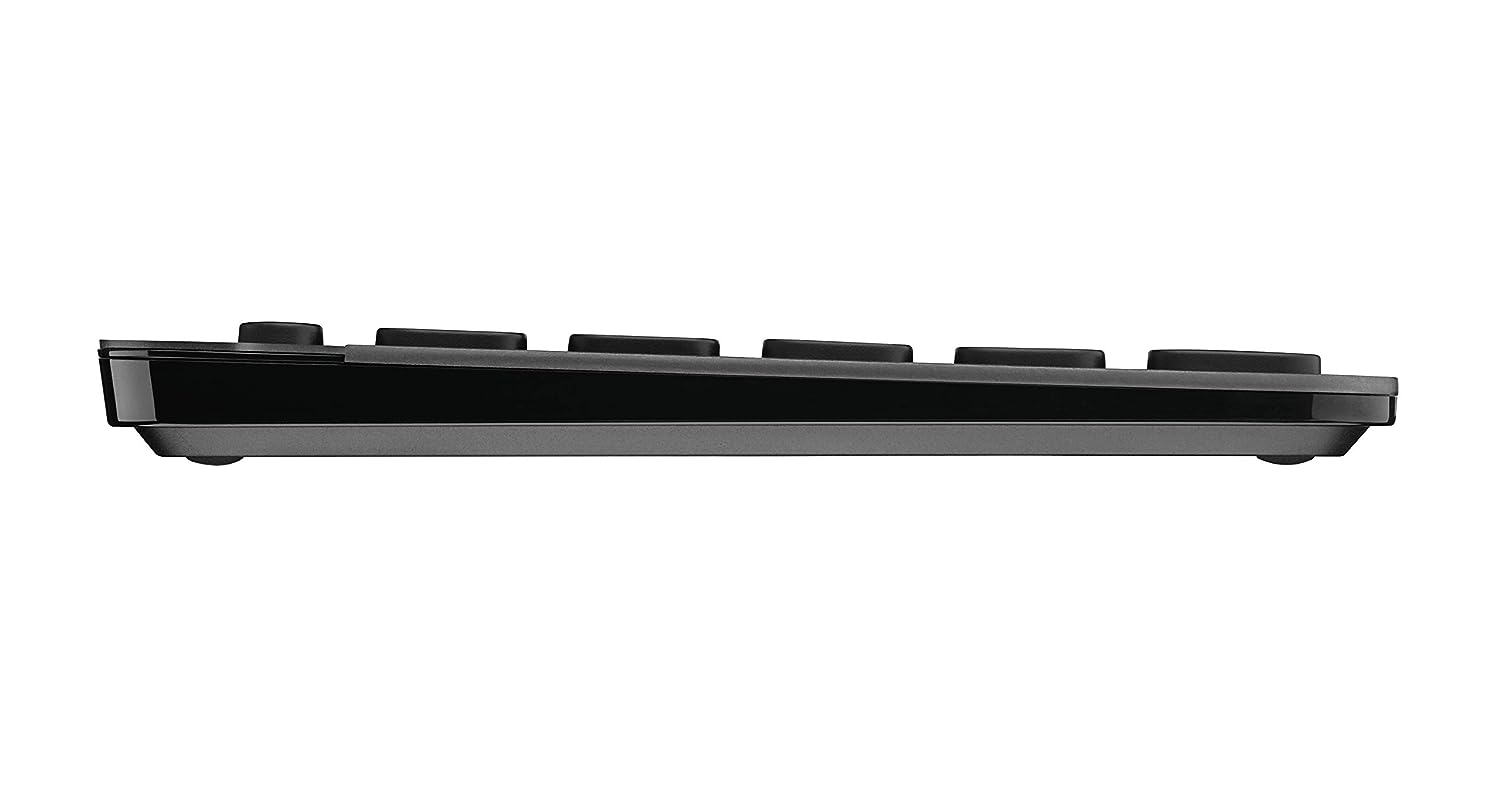 Considering that most people looking for a Bluetooth keyboard want something that's easy to connect and pair up with their mobile devices, portability is often a concern for those typing on the go. As such, it's no surprise that Logitech focused on making the K810 simple to carry. Overall, the keyboard is very lightweight while still being durable.

However, even with the condensed keyboard layout, the K810 still isn't perfect for transport. For tablet users, you may want to be able to tuck your keyboard in with your tablet for one bag. However, depending on the size of your tablet and its case, the K810 might be just a bit too large to fit. If this factor matters to you, then you may want to compare measurements before purchasing.

We've briefly talked about some of the K810's performance aspects in other sections, but it's time to discuss them in a bit more detail. Putting aside the potentially cramped feel of the keyboard space, typing on the K810 is not only smooth but also silent. No need to worry about making a racket as you race to type up that critical email.

One thing to keep an eye out for comes as a result of the K810's Bluetooth keyboard status. This setup means that you may see some performance issues like a slow response or missed keypresses if your Bluetooth connection isn't right. Updating your Bluetooth dongle can smooth over these issues, and the K810 should make for happy typists all around.

The updates to Logitech's wireless keyboard design come to full fruition in the K810. The K760 already had a solid look and feel to it, but the K810 takes these things a step further. Thanks to the addition of the proximity sensor, the K810 prevents any delay in the startup that some other wireless keyboards experience, and the backlight is an excellent add-on for typing in any conditions.

One place where the K810 may seem a little lesser than its predecessor is in that the K760 is solar powered, while the K810 recharges through USB. It's still convenient to do, but for people who put consideration into where their device get energy from, the K810's battery is incredibly efficient and doesn't require much maintenance.

Looking outside of the Logitech sphere, we've seen some rather impressive Bluetooth keyboards over the past few years. One that comes closest to the Logitech K810 is the Microsoft Sculpt Mobile, which is overall excellent regarding functionality. However, the K810 has an impeccable design that competitors will find hard to beat along with its great typing feel—easily making it one of the top wireless keyboards.

While the K810 is an excellent keyboard, that level of quality does come at a price. The MSRP for the K810 is reasonable, but may seem a bit excessive for an accessory keyboard. It happens to be roughly above the average price of comparable accessories, which can easily be a breaking point when it comes to deciding on a purchase.

However, considering what you're getting with the K810, that price is worth it. Logitech's keyboard is durable yet lightweight while having high performance and feel. People looking for something to occasionally work with may not find the investment worthwhile, but anyone typing a lot on the go can see a lot of value in owning an excellent keyboard.

Since its release, the K810 has had overall feedback from users and reviewers alike. Tech experts appreciate how the updates have made typing on the K810 a great feeling experience that's easy and comfortable to use. The upgrades to motion sensing and backlighting are great points over the previous K760, and it stands its ground around even comparable keyboards.

The sleek design is also a part of the positive reception, as it easily can make other keyboards with comparable technology look less impressive. While wireless accessories are becoming increasingly common, they don't always look like modern pieces of tech. The K810 breaks that expectation.

Aside from expert opinions, customers that have purchased the K810 keyboard have found it excellent to use overall. The typing is smooth, there's minimal user noise, and its convenient for travel. When one of the most significant problems with a Bluetooth keyboard is that it doesn't have a way to prop up a phone or tablet included, you can tell it's going in the right direction.

With the overall improvements that Logitech has made to the K810, we're big fans of its whole build and functionality. For anyone that's regularly trying to compose messages while on the go and is feeling tired of having to do all the work with just their thumbs, a wireless keyboard is what the doctor ordered—and the K810 is that keyboard.

While it does make the switch away from solar power to a cord charging model, the battery life on Logitech's K810 is so long-lasting that it doesn't make too much of a difference. The motion sensing doesn't just mean that the K810 will be ready to go before you even press a key, but it also helps it keep energy use low if you need to step away, and you can completely power it down if necessary.

We're also a fan of the backlighting to help keep the keys visible, and the overall performance makes a smooth experience along the way. While it's unfortunate that there isn't a kickstand or propping device for when you get to work on a phone or tablet, that's a problem that's easily solved by picking up another accessory.

Of course, the Logitech K810 isn't for everyone. People seeking out a gaming keyboard may not have the responsiveness or key layout they need, and anyone looking for a separate number pad will have to do so elsewhere. The same applies for people who routinely use the page down, up, home, and end keys; because of the size, the K810 doesn't have the cope of a full keyboard.

It's also important to keep in mind that the K810 is a Windows model (complete with Windows key). It will still function with other OS's, but people who work routinely with an Apple keyboard layout should pick up the K811, the same model for a different brand.

Overall, Logitech's K810 is an excellent keyboard, and it has plenty of uses that make it well worth the price tag.