The other day I was wondering, how much does the NVIDIA dGPU improve the graphics performance of my Surface Book?

Don’t get me wrong, as a gamer, I think it’s awesome to have an NVIDIA dGPU in my Surface Book’s keyboard portion but is it really any better than the integrated graphics processor (Intel HD 520) that came with the Skylake i7 CPU?

It could be that it’s just an extra bit of marketing hype and doesn’t really contribute anything to system performance? I decided to compare them and find out.

To better compare the performance differences, I figured the easiest thing to do would be to break out 3DMark and the Unigine Haven bench-marking tool and see if I could get my Surface Book to melt.  😉

If you’re not familiar with graphics bench-marking tools, they basically make the graphics processor “draw” a complex scene and display it on screen. Even though it may look like a movie, each scene is virtually constructed “on the fly” by combining thousands or hundreds of thousands of individual shapes into one large 3-dimensional “world”.

It may not sound like it but it takes a lot of complex mathematics in order for this to occur. A more powerful graphics processor can do this math faster and results in a higher frame rate (or frames per Second – FPS) and smoother video.

In order to have some semblance of scientific rigor, here’s a list of my testing conditions:

Futuremark 3DMark is pretty much the gold standard for graphics bench-marking. Their software is comprised of multiple separate benchmark tests (called Ice Storm, Cloud Gate, Sky Diver, and Fire Strike). You can see the average results of my five benchmark runs below – bigger scores are better: 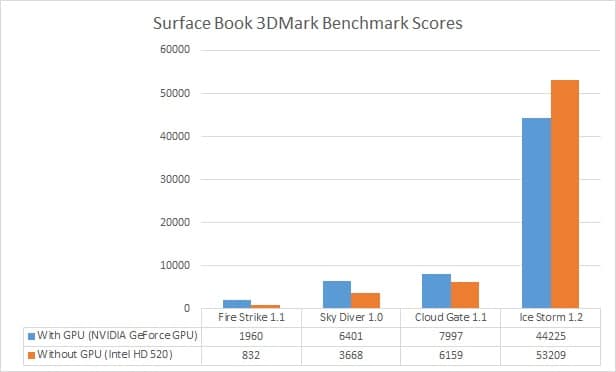 While some of these scores may look impressive on their own, the Surface Book is hardly a powerhouse gaming rig. In fact, when the results of the Fire Strike test is compared against other systems that have run it world-wide, the Surface Book is only better than 18% of systems and that’s with the NVIDIA dGPU in the keyboard attached!

To help you get your head around that, below is a graph generated by the 3DMark software showing how my Surface Book compared to other systems that ran the test world-wide. As you can see, the Surface Book performs better than an average notebook PC but not quite as well as a 2 year old gaming laptop.

In case you’re wondering, when using the integrated graphics controller and not the dGPU, the Surface Book is only better than about 7% of systems tested world-wide.

Also, if you were paying attention, you may have noticed that during the Ice Storm tests, the integrated graphics controller actually outperformed the NVIDIA dGPU. I was a bit surprised by that too but the result was very consistent.

During the Fire Strike test in particular (which is the most intensive of the tests I ran) the dGPU resulted in a score that was a staggering 2.36 times better of the integrated HD 520 graphics score for the same test.

This test is a bit more intense than some of the 3DMark tests. It really only tests the DX11 capability of the system but it hammers the crap out of it. You can see the final scores in the graph below – bigger scores are better: 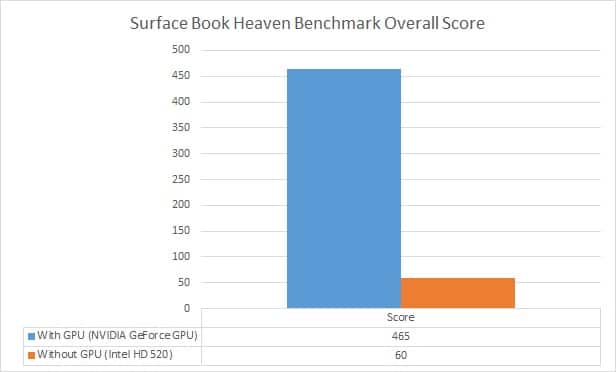 In this test, the dGPU makes a huge difference in performance; however, it only tells half the story. The Heaven benchmark includes a few additional details that you might find interesting, such as frames-per-second (FPS).

You can find that information in this graph: 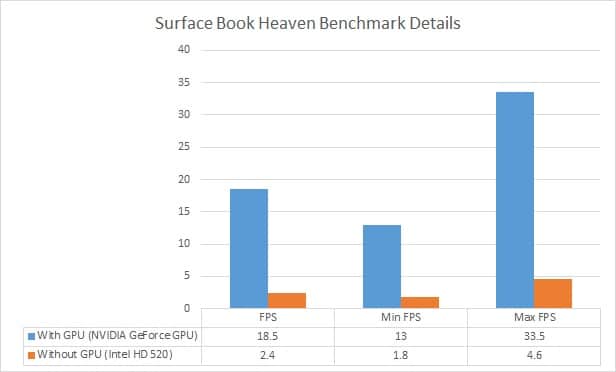 While I’m a bit disappointed that my $2100 Surface Book is scoring so low in the 3DMark tests, I’m not surprised. Let’s face it, despite all of the hype about the dGPU, the Surface Book IS NOT a gaming rig.

So, if you’re planning on using it primarily as a gaming computer, forget it. Take it back to the Microsoft store and put to money toward a nice Alienware machine.

However, if you want a highly-capable and flexible laptop/tablet combo that just so happens to be able to do some light to mid-range gaming, you’ll have a hard time doing better than a Surface Book.