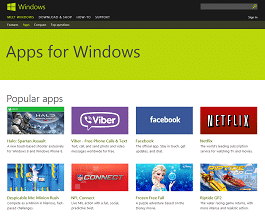 The implication from Apple and Android is that you won’t be able to get the apps you want if you aren’t using an iPad or Android tablet.

So, it got me wondering, is this really a problem? I know I can load actual desktop apps on my Surface Pro (good luck trying that with an iPad or Android device) but am I missing out on the mobile app ecosystem by using a Surface?

Windows Store Apps: How many apps are in the stores?

It’s a constantly shifting number but both the Apple and the Android Stores went over 1,000,000 active apps in 2013. Very impressive, right? I know both Apple and Android spent time hyping how impressive going over a million apps was when they did it.

However, I always have to ask myself the following question; “how many of those apps are total crap?” Intuitively, I know the answer to that question is “most of them”.

In comparison, the Windows Store has a much more modest set of apps. with only about 111,000 at the time of this writing.

Windows Store Apps: Is my favorite app in the Windows App Store?

Honestly, the answer is “probably“. If you look at the big name apps in all three stores, there’s a lot of overlap. All three have Angry Birds, Dropbox, Instagram,  Facebook, Netflix, Twitter, Temple Run, Cut the Rope, and so on and so forth.

Windows Store Apps: How can I find an app I need easily?

There are a couple of ways. The first is to simply browse the Windows App store from your Surface. It has a decent search function and does a decent job of categorizing the apps so you can find them. The downside is that the layout can be a little confusing and isn’t always very intuitive.

Another option is to check out AppFeds. They have a clean and attractive web interface into the app store that includes statistics and alerts when there are price drops. Using that last feature, you can get some decent deals on pay-for apps.

I hope you found this post informative and interesting. Whether you agree or disagree with my opinions, I hope you’ll let me know.