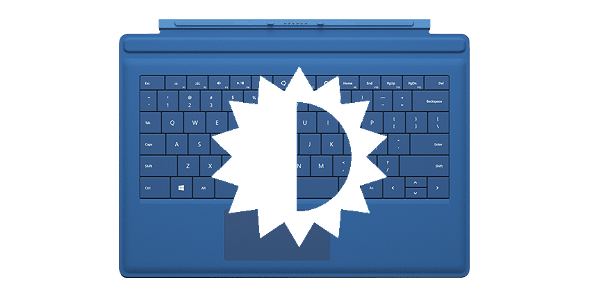 Have you tried to adjust the Surface Pro 3 screen brightness by pushing the brighter and dimmer (Fn+F1 and Fn+F2) keys on its type cover? If you did (don’t worry you’re not alone, we did this too) you probably found out that those keys only control the brightness of the keyboard cover back-light.

Well, that’s a bit counter-intuitive, is it not? So, can you adjust the screen brightness from the Surface Pro 3 Type Cover and if so, how?

The short answer is yes and it’s actually pretty easy.

It’s easy but the problem is that there is no labeling on the keyboard to tell you how to do it. So, here’s how:

Told you it was easy. It’s just not obvious how to do it. But now that you know, you won’t have any problems.

If you stumbled on this post because you were trying to adjust the Surface Pro 3 screen brightness but you don’t have a Type Cover, check out this post I did a while back on Screen Orientation and Brightness Settings.

That should give you the information you need.

Adjust Surface Pro 3 Screen Brightness: How about the Surface 3?

With the Surface 3 Type Cover, Microsoft fixed the problem. There are keys for adjusting the keyboard back-light AND keys to adjust the screen brightness. Apparently, this was enough of a complaint that Microsoft decided to address it.

Oh, and in case you’re wondering, the Fn+Del and Fn+Backspace keyboard shortcuts also work on a Surface 3.

That’s it. I hope you found this short little quick tip article helpful if you’ve been having this problem.