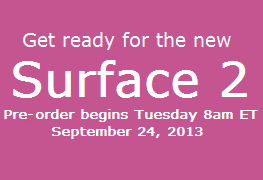 Microsoft boasts a better, new Surface Pro 2 – the new, true one-device for your computing needs. Although it doesn’t look different from the existing Surface Pro, Microsoft claims that under the hood almost everything is better. Among the key improvements that we’ve all been waiting for are processor, graphics, battery life, and kicks stand. In this post you will see what’s better and what it means to you.

The Surface Pro 2 improvements will include the following:

Haswell Processor: is faster and runs cooler. Microsoft claims that the existing Surface Pro is already faster than 95% of the laptops on the market today. With this processor you can expect an additional 20% performance boost – nice!

Adjustable kick stand: two-shot kick stand. It now has another setting to make it more suitable for lap usage. This was sorely needed.

Better battery life: during the launch event in New York today, Panos Panay, a VP of Surface at Microsoft, said that there will be up to “75% battery life improvement” with the new design. In addition he said that new Power Cover will at 2.5 times the battery life to the Surface Pro 2. Woohoo, this is something we’ve all been waiting for!

Free bonus services: SkyDrive 200GB free for two years, free Skype WiFi hotspot and unlimited international calling to landlines in over 60 countries free for the 1st year – I like the bonus stuff!

As Tim predicted Microsoft did address a lot of the complaints we’ve all had about the Surface Pro with this new product. They gave us better processor, longer battery life, and most other things rumored. The one thing that is unfortunate is that Microsoft did not address the LTE support – it would have been nice. But I will forgive them because they added the free bonus services to compensate for it.

Unless the actual product totally sucks and I don’t think it will, the new Surface Pro 2 may be a winner. I’m certainly going to order one! All though, it does peeve me off that the Surface Pro 2 is being released only a few months after the original Pro, not even a year! Sigh – such is the geek world. You can pre-order starting at 8AM today here: Microsoft Store

You may also like our posts on: Surface 2 Specs Comparison and Surface 2 Pricing.