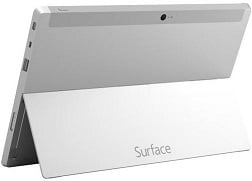 What are the Surface 2 (RT) Improvements and New Features?

The Surface 2 line of tablets has been rumored for a while. I will admit that I didn’t expect for it to come out quite this early but it makes sense in light of the upcoming holiday season.  The Surface 2 (RT) – as well as the Surface Pro 2 – became available for pre-order today. If you did pre-order one today, it will ship to you on October 21st with free shipping and free returns (if necessary).

Unfortunately some of the rumored Surface 2 (RT) improvements and features did not come to fruition. The lack of LTE support has been my biggest disappointment. I also would have liked to see a smaller form factor – say 7-8”. But looking over the specs; the new Surface 2 (RT) does sound promising as a tablet device – especially because of the reasonable starting price of $449.

Here are the new Surface 2 (RT) improvements and features:

Faster Processor: Nvidia Tegra 4 processor. According to Microsoft, you won’t see that little delay common to the first gen Surface RTs any more.

ClearType Display: HiDef 1080p. This is the same screen as on the Surface Pro 2. It boasts better color and easy sharing with big screen via the HD Video Out port.

MS Office with Outlook: this is huge! I’ve been waiting for this feature because, frankly, I’m not crazy about the email/calendar/people built-in apps.

USB 3.0: offers 10x faster data transfer rates over the previous USB 2.0 port. It also offers improved power efficiency and video transport allowing you to use a USB docking station without the need for additional cables – and not just the Microsoft one.

New color: this is probably the first thing you’ll notice. The new color is matte silver. It’s supposed to be smudge-resistant. I like it and wish the Surface Pro 2 came in that color as well.

Two-position kickstand:  same as the Surface Pro 2, Microsoft added another position to the kickstand. You can now adjust it to either stand up or lay lower.

New accessories: along with the Surface 2 tablets, Microsoft also released a line of 7 new accessories. Most of them work with both versions of the Surface 2s and the original Surface Pro. See our post for details and pricing: Surface 2 Accessory Pricing

My 2 cents: I currently own a first gen Surface RT and I’m quite happy with it. The only thing that I feel keeps it from being a true iPad competitor is….wait for it…… it’s not the number of apps……it’s the lack of LTE support. Unfortunately Microsoft did not address this with the new Surface 2 – all though free Skype WiFi hotspot helps a little. So, I’m not going to rush out and buy a Surface 2 (RT) because, although really cool, I don’t see the Surface 2 (RT) improvements outweighing its cost. I’m happy with my current RT, so I’ll keep it for now.

You may also like our posts on: Surface Accessories and Surface Tablet Case Reviews