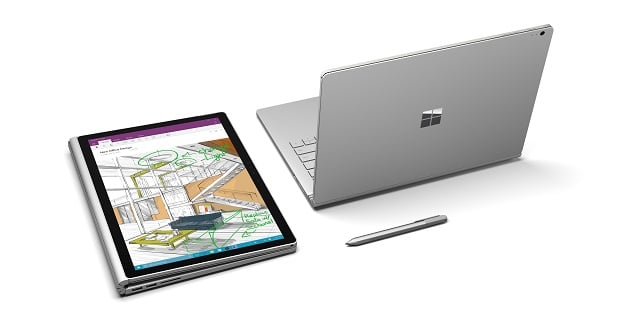 If you’re like me, you’re looking longingly at the Surface Book. I know I want one but, frankly, I’m a little dubious about the Surface Book battery life figure of 12 hours promised during the Tuesday presentation. I plan on doing some extensive testing on this once I have a Surface Book I can torture 😉

On top of the total battery life question, I have a couple of questions about charging the Surface Book (as it has two batteries – 1 in the keyboard and 1 in the clipboard portion):

It turns out that TechCrunch has released a video where they’re looking at the Surface Book for the first time. During the video, they asked a Microsoft rep about battery life and he indicated the Surface Book gets only “about three hours” of battery life when disconnected from its keyboard.

The Microsoft employee also explained that “three-quarters of the battery is in the base, one-quarter is in the top so you get about three hours of runtime in “clipboard mode.” (You can hear the comments yourself starting at about 0:26.)

Ok, that’s one question answered, I now know that the clipboard portion gets 3 hours of battery life. It seems disappointingly low.

The Microsoft rep in the video went on to say “The Surface Pro dock can plug into either the base OR it can plug into the clipboard”. OK, that partially answers another question. You can separately charge the clipboard and the keyboard piece.

Another Microsoft employee helped explain on Reddit how charging works on the Surface Book when he said; “It appears to use the battery of the dock first, since it’s much bigger, then it switches and uses the very last part of the battery in the tablet as it winds closer to zero“.

OK, that tells me you CAN charge either the clipboard OR the keyboard portions but, if they’re connected, you can charge both at the same time with a single cable. That fully answers my question about charging.

While I’m disappointed with the 3-hour battery life for the clipboard, I am happy that it will (apparently) recharge from the keyboard battery when docked. I’m also happy that I only have to plug (and keep track of) one charging cable.