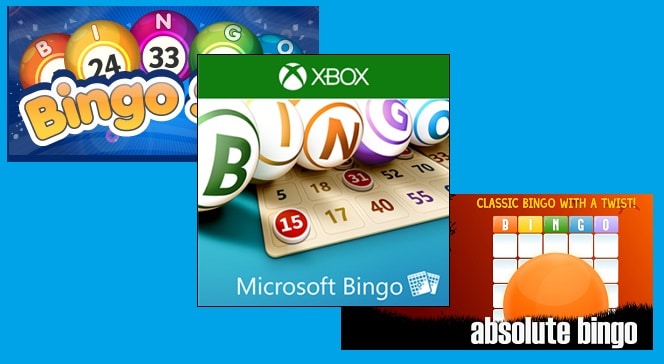 It seems a distant memory when Bingo was only played by people over 60. Electronic Bingo games have long been integrated into computers, tablets and phones, and the Microsoft Store offers several titles to people like me, who want to kill time playing one of these most popular pastimes in the world. All the apps are free so you don’t have to worry about paying a premium for them.

True to its name, Absolute Bingo is absolutely one of the most complete bingo games out there. It runs in offline mode, so you can even play it when you’re on the subway or a plane with no Internet connection.

Absolute BINGO has 6 stages including Aura, Katavi, Misty Mountains, Just Beauty, Druids Maen, and Magellan. Each of them is nicely designed, and its animations blend seamlessly into the game’s interface. During game play, you can play with up to 4 bingo cards, and are able to see the last 5 called-in balls to avoid a “sleeper win.” The entire game is narrated in English, with four-second pauses in between calls. It’s simple, fast, and it’s light on HD space.

Contrary to Absolute Bingo, Bingo Star has Internet functionalities, so people can play it with friends or people in the Bingo Star community. Just like Absolute Bingo, it has quite a few attractively-designed levels that players can unlock while playing the game.

This game carries with it the commercial license of Microsoft and is the only title that has support for Xbox LIVE. If you love bingo and use the Xbox console heavily, you might want to give Microsoft Bingo a try.

No longer just a casual game that can be played on computers and tablets, Bingo has transcended into a full-fledged, console platformer. Perhaps the reason for this is because the gaming market has grown significantly over the years (primarily as a result of online growth), where enhanced interfaces, HD-quality visuals and superior products have led to a fuller customer experience, as stated by mobile gaming provider Gala Casino. As a means to promote a richer customer experience, Microsoft has integrated its very own LIVE to Bingo.

Items within the Microsoft bingo app include coins, keys, power ups and tickets. It has the same functionalities as Bingo Star whereby tickets are used to purchase cards, keys to unlock collectibles, and power ups to give players an edge over opponents. The game also has several levels to beat, providing hours and hours of fun to bingo lovers, like me.

Do you have a favorite game that you play on your Surface? Share it with us in the comments section!