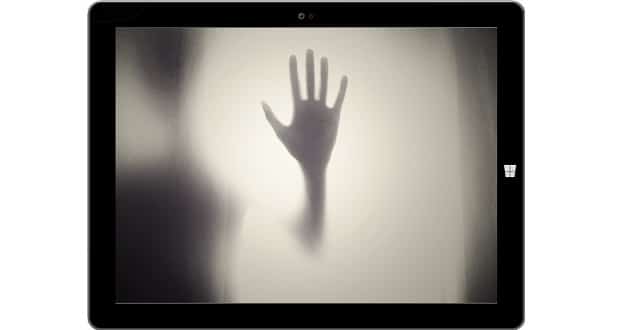 Have you ever had “Phantom touches” (or ghost touches) on your Surface touchscreen? Phantom touches are when the Surface touchscreen is registering touches that simply aren’t there. If so, you’re not alone as this problem has happened to me too. In fact, it’s not uncommon to see someone asking for help with this issue on various forums on a weekly basis.

So, if you’re experiencing phantom touches on your Surface, I put together this troubleshooting checklist of things you can try to fix it, or at least, identify the cause.

I tried to put these steps in the order of “slightly annoying” to “huge pain in the arse” (aka PITA); so, you’ll tend to find easier things to try at the top of the list and PITA things towards the bottom.

This oldie but goodie step is pretty straightforward. Simply do a full shutdown and restart. If the problem goes away and doesn’t come back it could have just been a glitch. If the phantom touches return, skip to the next step.

Another oldie but goodie, go into Windows Update and make sure that all patches have been applied. If the problem goes away and doesn’t come back, it might have simply been a bug that Microsoft corrected with an updated driver or firmware.

Phantom Touches on Surface: Go Outside (somewhere else)

If the phantom touches stop, then you’ll need to track down the offending source of interference. Old fashioned stick-type fluorescent lighting usually tops the list but don’t forget that CFL lights use a similar technology and could also be the source of the problem.

If, for some reason, your Surface is so sensitive to interference that just about anything will cause a problem, you might want to skip straight to getting it replaced.

If it’s not environmental, it could be the result of some corruption. Fortunately, Microsoft built some tools into Windows that may be able to find and fix it. These tools, Check Disk and System File Checker are pretty easy to use.

However, if you’re not familiar with them, check out this article to get started: Weird Issues with Surface? Try these fixes…

It’s possible the problem is the result of some virus or malware on your Surface. So, perform a full anti-virus and malware scan, just in case.

If the problem started happening after updating drivers or installing some software, you might want to consider doing a System Restore. This will revert your Surface to “an earlier point in time” just in case the problem is due to the new drivers or software.

You can find some guidance on doing a System Restore here: Using Windows 10 System Protection

If the problem is hardware related, it won’t help but it’s worth a try. Just make sure that you pick a restore point from before the touchscreen problem started (if one is available).

My venerable Surface Pro 2 had this problem about a year ago and after doing most of the steps in this checklist without success, I broke down and took a trip to the Microsoft Store. The store happened to be in Jacksonville, Florida (which will be important in a bit).

One of the techs in the store happened to have worked with upper-tier support on this very issue. It turns out that it can be caused by moisture working its way into the touchscreen assembly through minute cracks in the adhesive holding it all together. It can happen anywhere but it most likely to happen in a humid environment. The only reason the local tech knew this is because he had seen so many cases of this problem in Jacksonville, which is located right on the ocean so it’s always humid.

However, this means that you might be able to eliminate the phantom touches by putting your Surface in a large, sealable container with some (4 small ones or 1 large one) silica gel desiccant packs for a day or two. If you don’t happen to have some, you can buy them from Amazon for less than $10.

Even if you don’t live in a particularly humid place, it still might worth a try before performing a restore/reset or exchanging your Surface.

If nothing has helped you up to this point, you should consider a reset of Windows on your Surface.

I know it’s a pain to do but if nothing else has worked then this is the next step. Just be sure that you do the following before you start the reset:

If you’ve never done a reset on a Surface, check out Microsoft’s instructions here: Reset Your Surface.

And finally, we’re at the “catch-all”. If you’ve tried everything else on the list but are still having phantom touches on your Surface, it’s time to admit that it’s probably faulty hardware and the only way to address it is to contact Microsoft or visit a Microsoft Store to get your Surface replaced.