Now that the “all-new” Mac Book Pros have been out for a week or so, how is it faring against other laptops? Very well, apparently. Mac Book Pro vs Surface Book?

Apparently, the new Mac Book Pros are selling like hot cakes at the moment. Here’s the chart published by Slice Intelligence: 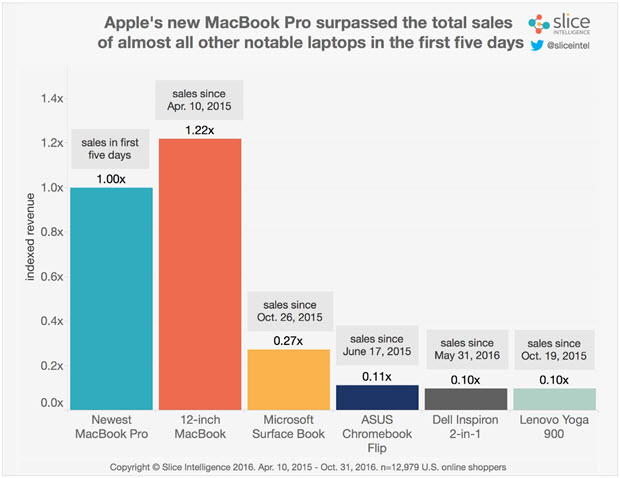 As you can see, the Mac Book Pro crushed every other competition, including the Surface Book. They sold 78% of what the old model did in just one week! And they achieved this even without the use of any touch screens and not-so-state-of-the-art hardware.

Not all good news for Apple

Many people have been complaining that Apple has been complacent with their Mac Book line-up for a while now. Heck, this probably applies to their entire line-up of products. This round of Mac Book Pro refresh is no different. Even the die-hard fans generally agree that the new models are somewhat underwhelming. Many are now claiming that Microsoft is the new Apple. After the demise of Steve Jobs, Apple pretty much stopped innovating.

Yet, the sales show that Apple still knows how to sell their product. But here’s another picture – are they as royal as they have been in the past? 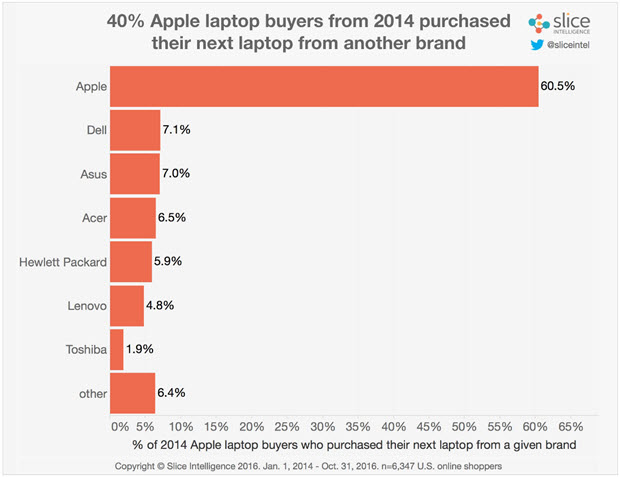 The above chart shows that about 40% of the existing (year 2014) Mac Book owners are switching to another brand. This is not a great number. These new models probably won’t help these figures moving forward.

This probably shouldn’t be viewed as a battle between Mac Book Pro vs Surface Book. In the world of Windows laptops, we have many choices, including the ones not shown in this chart. If you add them up, the picture wouldn’t look as bad.

Also, the Surface Books have been limited in supply. If Microsoft had supplied enough Surface Books, the picture would have been significantly changed. Arguably, the Surface Book is targeting towards narrower audience too (professional vs consumer?). Had they include the numbers for the Surface Pro 4 (targeting more mainstream users), once again, this picture could look totally different.

Will Apple users abandon Mac Book platform in the near future?

Probably not. Apple has built up an ecosystem, and its a good one. Their Mac Book line-up is part of it. Their phones, watches and other products don’t work well with non-iOS devices. It will take a lot of Apple’s incompetence for their users to switch out of the Apple eco system.

But IMO, it has started already.