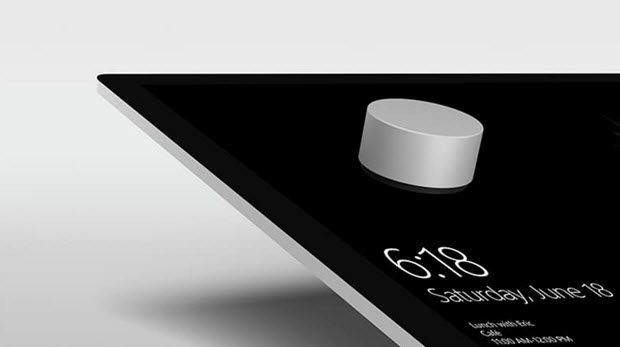 I have to admit, the Surface Dial caught me by surprise. I wasn’t expecting anything like this during this event.

It’s a very cool looking device that also appears to be functional. And it “only” cost $99.99 which is relatively cheap by today’s standard for a latest gadget.

These days, the role of Apple and Microsoft has reversed. Microsoft is the innovative company with neat looking gadgets.

What does it do for me?

The Surface Dial sits on the display screen and you can move it around. The key function here is that you can twist it around which can be mapped to give you functions like shortcuts, functions within apps, fine tuning controls, selecting tools, etc. Very neat.

You can either use it by sticking it on the screen, or take it off and a digital version pops up on the screen. Interesting…

The Surface Dial features a haptic feedback! That means you will feel the ‘clicks’ as you rotate them. Very cool!

Even as of now, the Surface Dial can be used to do stuff like controlling volume on Pandora, Groove or Spotify. You can of course, use it to scroll your browser content (confirmed to be working on Edge), and if your editing software supports it, rotate & manipulate objects. Microsoft Office already supports the device to some degree.

More mundane functions such as system volume control, brightness control, undo, redo, etc are all mappable. But I’m not sure if these tasks can be done any easier using the Surface Dial compare to the traditional methods.

It already works with some of the existing Adobe software for basic functionality but Adobe will need to use Microsoft’s API to fully realize the Surface Dial’s potential.

The supported apps are rather short at the moment but it is already growing.

And the Surface Dial is clickable! Under most circumstances, a click would bring a radial menu of context sensitive tools.

It uses two AAA batteries and since it uses Blue Tooth LE 4.0, a pair of batteries will last you up to a year, assuming you use the device 4 hours per day.

The Surface Dial currently works with the new Surface Studio of course. Microsoft promises that it will work with the Surface Pro 3, Surface Pro 4 and Surface Book as well! Doesn’t work, for now though.

Microsoft promises the support of these devices by early 2017.

The following apps are currently supported:

And of course, more to come in the near future.

Will it work when smaller Surface devices are hooked up to a larger (non-touch) displays?

At what angle will it stop work? I can’t imagine using this device at a 45 degree angle, or even steeper!

You can pre-order the Surface Dial here, at Microsoft’s site.

Question to the readers

Here are some videos circulating around:

(Another video from CNET)