MAY 4TH, 2015 UPDATE: Due to the discovery that the makers of 360 Internet Security gamed test results from multiple security testing labs, I updated this guide to remove the recommendation for their product that appeared in the originally published version.

At some point in the near future, I’ll make a new recommendation to replace the one for 360 Internet Security.

About a year ago Joanna did an article on whether or not you need antivirus software on your Surface.

The article still holds up and, if you have a Surface Pro (1, 2, 3, or soon 4), we still recommend that you get some anti-virus software other than Windows Defender. It’s not that Defender doesn’t offer any protection, it’s just that it’s not as good as some other antivirus for Surface.

The question then becomes, which one should you get? Well, that’s where this article comes in.

In this post, I’ll make some recommendations for free anti-virus software packages that are well rated by an independent test lab and work well on a Surface tablet.

Since I know most of you would rather not pay money for anti-virus (hey, I don’t want to spend money either), if you don’t have to, I’ll talk about your options today, as well as recommend my personal favorite.

There are many free anti-virus software available but I narrowed it down to four options. To help do so, I consulted AVTest.org (specifically the Windows 8 section) as many other online reviewers use AVTest as one of their sources – I figured I’d cut out the middle-man.

Also, when I say these antivirus for Surface Pro packages are free, I mean that they do not cost money. They will cost you a bit of “annoyance” as most of them will try to install tool bars or some other software you don’t care about. In addition, some of them will occasionally try to sell you something (usually the “Pro” version) or make you to create an account with the vendor which will result in messages in your email.

To avoid some of this “annoyance cost”, carefully read the prompts during the installation process and don’t install any additional tool bars or other unwanted software while you’re installing the Antivirus software. Also, remember that your spam filter can go along way towards dealing with any junk the vendor decides to send you in the future.

Lastly, the picks below represent “free forever” options, not trial versions (such as offered by Norton) that will work for some period of time then stop.

OK, now on to the options… 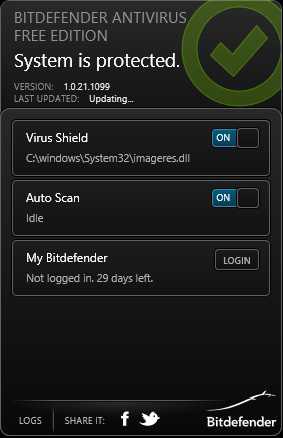 I use BitDefender on my Surface to provide anti-virus protection because of it’s superior detection and cleaning ability..

It offers a very minimalistic interface and is a quintessential “single-purpose” application because it ONLY does anti-virus which can be good or bad depending on your needs.

It’s good because it’s simple to use. It does not have a whole screen of ill-explained options that sometimes happens with other offerings.

It’s bad because it is difficult to know exactly what the software is doing at any given time. This is especially true when you use the “scan full system” option because all you get for a progress meter is a subtle blue outline around the queued task.

However, if all you want is a single purpose antivirus package that runs in the background and only bugs you when there’s a problem then BitDefender is an excellent choice. I usually recommend BitDefender for beginners for this very reason. 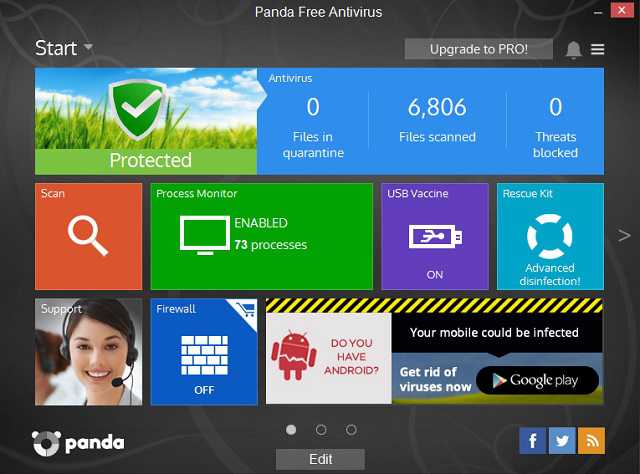 Panda Anti Virus is certainly the most “Metroified” of the applications on my list this year. It even mimics the start screen. It’s easy to install and use (especially with touch) and scored well on the AVTest.org site for detection.

It also offers a couple of extra tools such as the rescue kit which will let you make a USB key that can be used to scan any computer, without the need to install it (this is good because some viruses block the installation of anti-virus software).

Personally, I recommend Panda Anti Virus to intermediate computer users. It has a few nice options that beginners won’t care much about but not so many as to be too complex to use.

By the way, it is PC Magazine’s Free Anti-Virus pick for 2015 based on its strengths and would make a great choice to protect your Surface Pro tablet.

Antivirus for Surface Pro – 2015 Guide: What About Defender (MSE)?

A few people have asked about Windows Defender (Formerly Microsoft Security Essentials) and why it didn’t make the list.

We touched on this in our post last year but, the short version is because Defender generally doesn’t seem do do a good job catching malware when compared to other options.

You can see the AVTest results here

As such, as much as we like Microsoft, we can’t recommend depending on Windows Defender as it exists in Windows 8.1.

Any of the options above would be a good choice to help protect your Surface tablet from viruses and other malware, so go with whichever one seems to fit your needs best.

Remember, since these are free, you can always change your mind later. Just be sure to uninstall the old program BEFORE trying to install the new one. Antivirus software don’t usually work or play well together and will likely cause you problems if you have more than one.

The exception to this rule is the built-in Windows Defender, all of these packages will gracefully disable Defender during their respective installation processes.

Do you have a favorite anti-virus app? or have you had any experience with the ones I listed (good or bad) that you’d like to share? Your fellow readers would probably appreciate your insights.