Happy Easter to you, if you celebrate it, if not, I hope you still got your fill of chocolate eggs, chocolate bunnies, marshmallow peeps, and jelly beans.

Anyway, again there are lots of Surface Phone rumors, but in this week’s Weekly Surface News, I decided to focus on other things. So, here is a trio of Surface related news stories for your enjoyment. Today you will find:

OK, now shake yourself out of your sugar coma and read on…

“We are excited to see how Surface Hub will bring people together to work, create and learn in new ways,” says Hall. “We are not just releasing a powerful device. We are releasing a team-empowering solution that will make meetings more productive, modernize workflows and let people engage with data much better.”

If you’re interested in getting one, be aware that they aren’t cheap. The 55-inch model packs a $9,000USD price tag and the 80″ version is a staggering $22,000USD!!!! If that didn’t scare you off, below is a rundown of the features for each model.

Oh, and don’t forget that these things weigh hundreds of pounds, so make sure you have a sturdy wall to mount it.

The next major update for Windows 10 – which is code-named Windows 10 Redstone – looks like it will improve pen support for Universal Windows 10 applications. Of course, this is very important to Surface owners.

According to a leak from the Russian website OneTile.ru, Microsoft will be bringing back the Radial Controller, which was available in the Windows 8.1 version of OneNote Metro but was inexplicably missing from the Windows 10 version. 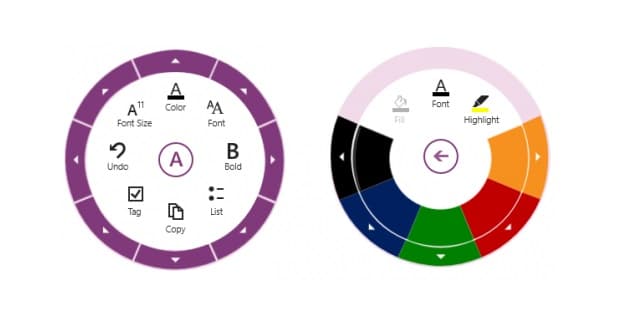 Another supposed pen feature is called InkToolbar. It will reportedly improve pen accuracy when drawing on websites, when using Microsoft Edge, and will (supposedly) support third-party apps with pen input.

Right now, the Windows Insiders are still working out the kinks but, hopefully, this update will be released to the masses soon.

Microsoft today shared the design story behind the revolutionary Surface Book device via a post on the Microsoft Design Blog. Written by Danielle McClune, who is a writer for Microsoft, the post gives some insight into the people behind the design.

Here’s an excerpt from the posting:

Try to recall one of those first magical moments when you made something work: you built a baking soda volcano for the science fair, you rode your two-wheel bike down the driveway, you tinkered with the guts of a clock. Now imagine that the world was watching, waiting with bated breath for the result. Imagine you were backed by an incredible, diversified team. Imagine that your achievement – the solution you found – was a eureka moment born of true tenacity and toil

This is how the Surface team felt every day for two years, as they embarked on the challenges of creating the Surface Book. Particularly, the unique folio hinge and detach mechanism required relentless brainstorming, doodling, building, testing, scrapping, head scratching, high-fiving, prototyping, and more prototyping. So much prototyping, in fact, that Industrial Designer Kait Schoeck laughs at the absurd amount of material the Surface team managed to create.

“We always joke that we could fill this whole building with prototypes,” said Schoeck. “It is for real. We made more models on this project than I’d personally ever seen before.”

So, if you’re curious how the Surface Book design came to be, head on over and give the post a read…

And that’s it for this Easter edition of the Surface News Roundup. Now you can head on over to the gym and work off the dozen chocolate eggs you binged on this morning, so you don’t hate yourself tomorrow. 🙂