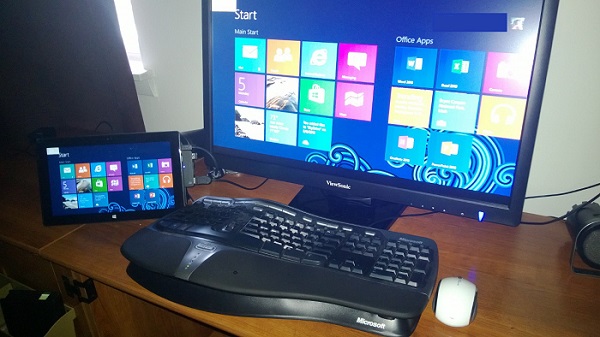 Surface RT as a desktop machine for two weeks.  And why not?

I want to remind everyone that Surface RT is not designed for this. It is technically designed as a tablet, just like an iPad. But since it has gotten so much criticism over this, I decided to actually try it out as my main desktop machine.  The results were surprisingly good.

By the way, you can duplicate this set up with a Surface Pro too.

Here is the setup I used:

What you need to duplicate it:

2) Monitor – I bought ViewSonic 27-Inch Monitor and absolutely love it!

3) Surface 5 in 1 USB Adapter – This one is handy because you can also use it to read different size SD cards: SD/SDHC/MMC4.0 and Micro SD/SDHC.

4) Video Adapter – In my case, I used MicroHDMI to DVI but to see which one you would need check out my table on different video adapters for the Surfaces.

5) Keyboard – I love ergonomic stuff because my wrists hurt all the time, so I used this Microsoft Natural Ergonomic Keyboard

6) Mouse – I used a wireless Microsoft Mobile Mouse, you can get it in black or white.

7) RT Power Supply – If you’re going to set this up as you “docking station”, then I’d recommend you get a spare one and besides it’s nice to have two anyway.

8) Speakers – Totally optional; I used my existing ones but you can get a nice Bluetooth speaker like this Portable Bluetooth Wireless Rechargeable Mini Speaker System. 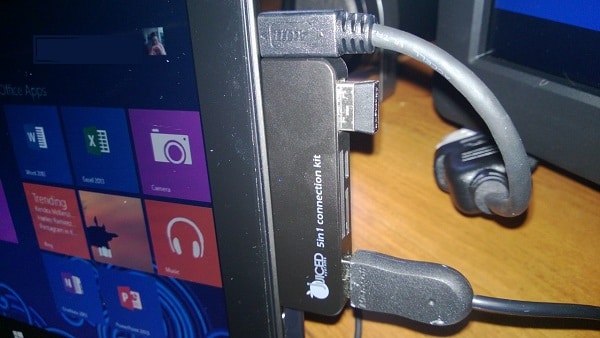 After a little tweaking, this setup turned out quite nice.  I really liked it.

Some of the software I used:

So now, how it functioned:

The Pros – things I liked:

Overall:
I liked the experience. I think one can definitely use the Surface RT as a desktop and run a business out of it. It will be a little bit slower and it does have some drawbacks but it is possible and quite doable.  I can see if one had an on-the-go job that required a tablet and then needed it at home for running a business (or whatever), I think it would work just fine: can’t beat the ease of integration if you’re using one device.  Given the fact that the Surface RT was not designed to be a laptop/desktop replacement, I would give it 5 smilies for its performance in this experiment.

Now, don’t get me wrong, if you have the money to buy both the Surface RT and a desktop at home and you don’t mind transferring files back and forth; then get them both. Better yet, you could use this set up for a Surface Pro if you want something with a little more power.

You may also like our posts: Comparing Surface Rt/Pro/iPad and Accessories for the Surfaces.