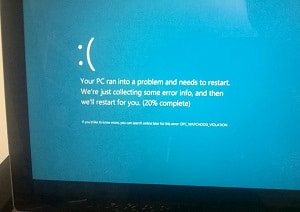 Read This If You’re Having Surface Pro 3 Wi-Fi Problems:

Well, you’re not crazy, that’s happening to my brand new Surface Pro 3 too!

I bought my Surface Pro 3 on June 20th and as soon as I started it. there was a firmware update to install. No surprise there. It’s pretty common for that to happen in conjunction with a new release.

Unfortunately, within a couple of days, I noticed some considerable Wi-Fi speed slowdowns. At first it appeared to be random and only on some networks but the problem progressively got worse and now, it’s pretty close to constant.

I’ve also now had a total of FIVE Blue Screen of Death (BSOD) instances. They seem to always occur when I am doing something network intensive, like syncing the OneDrive. I cannot get speeds higher than 6-7Mbps for downloads, no matter what network I’m using.

Considering that the minimum speed network I tested on should be 18Mbps, that’s really, really slow.

I searched the forums looking for answers and saw that Microsoft team was suggesting things like, adjusting router settings, changing wireless channels, and even buying newest (and specific) Wi-Fi routers – REALLY?

I’m an IT person and I know how to adjust my Wi-Fi setting but come on Microsoft, really? One should not have to go buy a new router to get your newest device on the internet!

So, I did some testing.

Here is what I tried to try and fix or identify my Surface Pro 3 Wi-Fi problems:

Turns out the memory dumps point at a network driver issue. So, my conclusion is that this seems to be a Microsoft problem. For their part, they have confirmed that next week, July 16, there will be another update released to “further improve Wi-Fi connection and throughput scenarios” on Surface Pro 3 tablets.

OK, that’s not exactly an admission of a problem but it’s close enough and I’ll take it. Though, it sure would have been nice if they simply said there was a problem and they were working on it; it most definitely would have saved me a ton of time I wasted on troubleshooting.

So, I am anxiously waiting for the new update and hope that Microsoft fixes these Surface Pro 3 Wi-Fi problems because I really do love this new device!