Surface docking station for Valentine’s Day so that I have a nice home for my Surface Pro 2 (isn’t she awesome?).

Since then, I’ve had some time to put it through its paces and found it to be a nice little piece of tech. The biggest plus it offers is convenience. Before I got it, I needed to plug in several cables if I wanted to use my Surface Pro as a desktop machine (which I occasionally do, especially when I’m playing games).

However, at $199.99 USD it’s a bit steep for a docking station. If you’re on a tight budget after plopping down $900+ for your Surface Pro 2, you’ll probably want to just get a DisplayPort to DVI adapter and a 5-in-1 USB Adapter for a total of about $45 USD. It will give you much of the functionality the Surface docking station offers but, it won’t be nearly as convenient or look as cool.

In addition, the docking station will only work with a Surface Pro or Surface Pro 2. Surface RT and Surface 2 owners will need to go with a budget solution like above (except, you’ll need the Micro HDMI to DVI adapter rather than the Mini DisplayPort version).

Now that we have that out of the way, let’s start by un-boxing the docking station.

Like most of the Surface accessory packaging, the box it comes in is sleek, stylish, and very black. Also like most of the other Surface accessory packaging, there are those little (nearly invisible) pull-tabs holding everything together. And like with all of the other accessories I’ve opened, I always miss one the first time and wonder why the hell the damn thing won’t open.

Anyway, after you manage to open the box, you’ll find your new docking station right on top covered with a protective plastic film. In addition, you’ll find a box containing the power supply. A manual (that few people will ever read) rounds out the contents of the box.

It’s obvious Microsoft has tried to make it look a lot like a Surface Pro tablet. It has the same finish and angled shapes.

It’s not made out of the same material as the Surface, though. It’s made out of plastic instead of the VaporMg material that the Surface is constructed from but since it just sits on your desk, it doesn’t need to be as durable so it’s not a big deal.

The Surface docking station comes with a charging port, a mini DisplayPort, an audio in port, an audio out port, an Ethernet port, one USB 3.0 port, two USB 2.0 ports, and a partridge in a pear tree….. OK, not the last one but it does come with everything else.

Below is a screenshot (from Microsoft) of the back of the docking station that shows the location of all those ports. 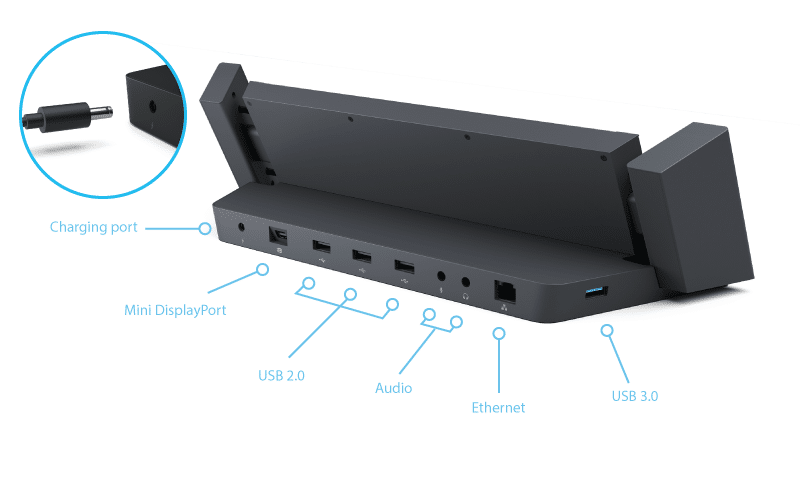 Some folks have commented that it would have been good of Microsoft to include some speakers in the side clamps. I don’t know if I agree, speakers small enough to fit comfortably on the sides of the docking station would probably not be significantly higher quality than the built-in speakers and would definitely add expense.

Using the Surface docking station is pretty easy, you just put your Surface tablet in cradle and close the side clamps. They slide into place easily and securely.

At first, I was concerned that I would have to play with the clamps to get the ports to seat properly but it’s obvious Microsoft put a lot into the clamp mechanism. The docking station does an excellent job of aligning the tablet when you put it in the cradle; so I’ve never had a problem with it not closing smoothly or the port connectors not seating.

The video switches over to the connected monitor automatically when you place the Surface in the dock and I’ve had no problems with the keyboard and mouse.

The Surface Pro, however, only supports the Display 1.1a standard. Unfortunately, this means that you can only use a single monitor even with the docking station. I can’t really knock the docking station for that but it’s probably something to be aware of before you get one if you have a 1st Gen Surface Pro.

If you can afford it, it’s definitely worth getting. Especially if you are using your Surface Pro or Pro 2 as a desktop replacement. It’s well made, convenient and, cool.

Feel free to share your opinions about the docking station.