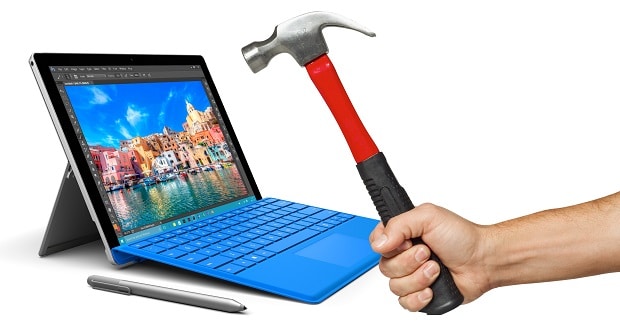 I thought I’d fill you in on my experience with the new Surface Pro 4. I got one on Monday along with Tim’s Surface Book. We both proceeded to set up our new devices. My first impression was: “I friggin’ love this thing!“.

What’s not to like? It’s light, fast, the Pen rocks, and I can’t even tell you how awesome the screen is.

I was initially quite happy with my new Surface Pro 4. Unfortunately, once I started setting it up, my problems began. I noticed a very pronounced flicker on the screen. At first, I thought it was only when using the Edge browser but then realized that the problem was global. I suffer from chronic migraines and so, the flicker is a very bad thing for me – it’s a trigger.

I did all the normal stuff: troubleshooters, driver pack install, updates, etc. Nothing seemed to work, so I gave up for the day and decided to tackle the problem next morning.

The next morning, I discovered yet another problem: the rear camera would not take pictures with the Camera App (same on Tim’s Surface Book) ….hmmmm….

So, now I had two problems, after more of the usual troubleshooting and searching for answers, I decided to call Microsoft for help. I was lucky, I got a knowledgeable technician with a direct line to the Surface engineering team to work with me. We spent 7 HOURS together on the phone and via remote access to try to fix the device.

Here is a recap of the experience:

Surface Pro 4 Problems: What we tried (with MS tech team on the line)

I had a total of 4 blue screens throughout this process in less than 24 hours – 2 on my own and 2 with Microsoft online. The techs finally gave up and told me to take my device back for replacement. So, I called the retail store near us but, unfortunately, the store doesn’t have my model (i5 8GB 256) to replace it with, they are sold out and I will have to wait until end of November for a new one.

And while I’m flattered that Microsoft gave me this much time and really did try to fix the problem, I am super disappointed that my new Surface Pro 4 doesn’t work. My only choice at this point is to return it and wait for weeks to get a new one. UGH – Did I mention I am not patient person?

So, what’s the point of this post? Well, I want to let you know that there are potential problems. As with other brand new hardware, it takes time to work out the kinks and I, apparently, am one of the unlucky ones that got a Surface Pro 4 with problems.

You may remember the Surface Pro 3s had issues with network cards when they were first released. I guess the Surface Pro 4s, have video problems (yes, I did research it and there are others reporting the same problems – so I am not the only one.) In fact, the MS tech acknowledged that the flicker was a known issue they were working on fixing – he gets an A+ for trying to fix it. However, there are lots of folks out there that got the SP4 and have not seen either of these issues – so, go figure….

Bottom line is this, the processor in the Surface Pro 4 is brand new (launched in August), so perhaps Microsoft hasn’t had enough time to properly test and create drivers yet..? With such a short turnaround, problems are to be expected but not certain.

I am still going to get a Surface Pro 4, I just need a replacement that works and I still think it’s an awesome device.