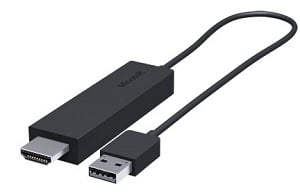 New Surface Accessory to Keep an Eye Out For:

Microsoft announced on Tuesday that their newest Surface accessory is available for pre-order.

Why, the new Microsoft Wireless Display Adapter, of course.

Well, I’d say, you should! This nifty new gadget will allow you to wirelessly connect your Surface Pro (1, 2, or 3) to any HDMI capable HDTV, monitor, or projector – yes, you read that right AND it will allow you to share both audio and video content from your Surface Pro device. In fact, since the Microsoft Wireless Display Adapter is Miracast-enabled, so it will work with any Miracast friendly device AND from up to a 20-feet away!

Well, it does but you may say: “who cares, I already have a Chromecast”, see post on Configuring Chromecast on Surface tablet.

Unlike Chromecast, the Microsoft Wireless Display Adapter is designed to work with both Android and Windows devices. AND (yes it gets better), since the Surface has the Miracast technology built-in, you’re not limited to certain apps or content streaming; you can display everything from your device on an HDTV or monitor. This is in contrast to Chromecast that is limited to proprietary technology that only works via the Chrome browser or a limited set of apps.

The cost of this new sweet, sweet (can you tell I want one?) device is just $59.95 and can be pre-ordered via Microsoft or BestBuy.

According to Microsoft: “The Wireless Display Adapter will work with Surface Pro, Surface Pro 2, Surface Pro 3 and Surface 2, as well as any Miracast-enabled PC or phone, including Android devices running Android 4.2.1 and later.“

Anyway, I’m anxiously awaiting mine – my pre-order having been placed. I especially think the Microsoft Wireless Display Adapter will be useful for me with external monitors and projectors when I’m doing presentations at my day job.

We will do some major testing when we get it and report back to you on our findings.