Today, I have a cautionary tale for you regarding the Surface 3 charging port and the mini-USB connector.

It starts with me trying to attach a Mini Displayport connector to the Surface 3 so I could project to an external display that didn’t support Miracast, see my post on streaming video with Surface 3 for more on that.

Unfortunately, when I did so, I discovered that the Mini Displayport connector on the (just over a month old) Surface was broken. Basically, the “Tongue” was broken off and was pushed all the way to one side of the port as illustrated below: 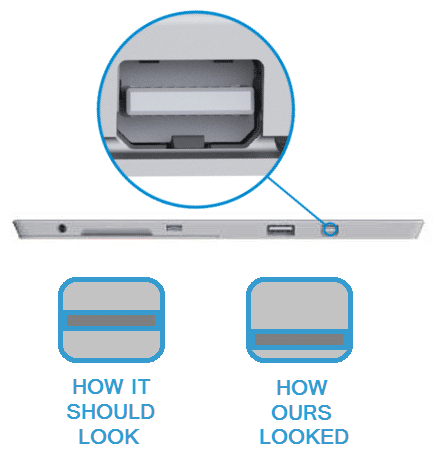 How could this be? It was nearly a brand new unit and neither of us had used the Mini Display connector up to that point. We concluded that it must have been a manufacturing defect and took a trip to the Microsoft Store.

When we showed the tech the connector, he was puzzled. He agreed that it must have been a manufacturing defect and exchanged the unit without question. That should have been the end of this story but… it isn’t.

Two days after we got the exchanged unit, Joanna noticed that it wasn’t charging after one of us plugged it in (I’ve been married long enough to not say “after she plugged it in”).

Great, a brand new Surface 3 that we just got in exchange and it’s broken too?

Surface 3 Charger: Pay Attention to Which Port You Plug In

When I inspected the Surface 3, I noticed that the light on the charging connector was not on (this is why Joanna said it wasn’t charging) but after a couple of seconds I realized that the mini USB connector was connected to the Mini Displa