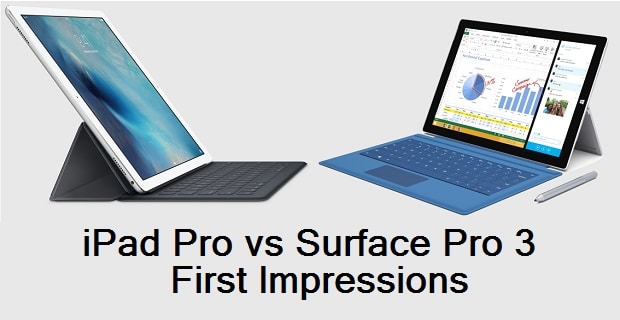 If you hadn’t heard yet, Apple announced the iPad Pro today. At first glance, it looks like Apple took a lot of inspiration from the Surface Pro 3 as it offers a 12.9″ screen, it supports the “Apple Pencil” (Surface Pen), and it even has a detachable “Smart Keyboard” (Type Cover) option.

But, aside from surface (no pun) appearances, how does it measure up?

One way to start the comparison is to look at the technical specs for both devices. It won’t tell us how much people will enjoy using one compared to the other because that’s a very subjective thing but it can give us a good idea of what each device offers from a performance and feature perspective.

Let’s take a quick look at some of the technical specs of both devices side-by-side:

(* Updated to reflect Adobe saying the iPad pro has 4GB of RAM, Apple has not confirmed as of yet)

As you can see from the specs, the iPad Pro offers a bigger screen than the SP3. In addition, it offers a few features like a fingerprint reader and an LTE option that the SP3 lacks.

However, it has a considerably weaker processor than its Surface Pro competitor and only 2GB of RAM which might prevent it from performing well when running multiple tasks. On top of that, since it runs iOS, you’re limited to running only what’s available in the Apple store (granted there are a lot of apps there). As you know, you can run any Windows-based programs on the Surface Pro 3.

As I mentioned at the beginning of this article, Apple is offering a stylus/pencil option and a keyboard option; however, they both cost quite a bit more than the equivalent Microsoft accessories ($99 for the Pencil and $169 for the Smart Keyboard versus $50 for the Surface Pen and $120 for the Type Cover) so I can’t imagine Apple users will be happy about that – at least I wouldn’t be.

Obviously, I haven’t had a chance to actually play with an iPad Pro but it seems to me that the A9 CPU and lack of RAM is going to really hold it back. Yes, Apple has always done a good job of managing memory but I just can’t imagine that this device will offer a fraction of the computing power that the SP3 offers, let alone the Surface Pro 4 when it releases. Frankly, I feel this device is competing more with the (now defunct) Surface RT/2 line than the Surface Pro line.

But, maybe that’s not the point… What do you think?