Works with: The whole family of Fitbit devices. Tim and I each have the Fitbit One.

The Fitbit is a family of fitness trackers that help you to stay active and reach your activity goals. The devices are purchased directly from Fitbit and then Fitbit software allows you to view your activity results. Fitbit App is available via the Windows Store. It lets you sync and track your progress. It tracks things like number of steps, calories burned, distance traveled, number of very active minutes, floors you’ve climbed, and your weight.

You might say: “so, what? I can see most of the same stuff right on the Fitbit device”

That is true, however, the application also allows you to see both daily and historical data. This means that you can track your progress over time and compare against your own goals. I find this helpful. It will even allow you to track your nightly sleep patterns (if you have the Fitbit One device like me). It also has a social component, so you can share data with your friends or family members and see how you measure up against them – personally I don’t use this option but others may like it.

You can see the menus and features in this picture: 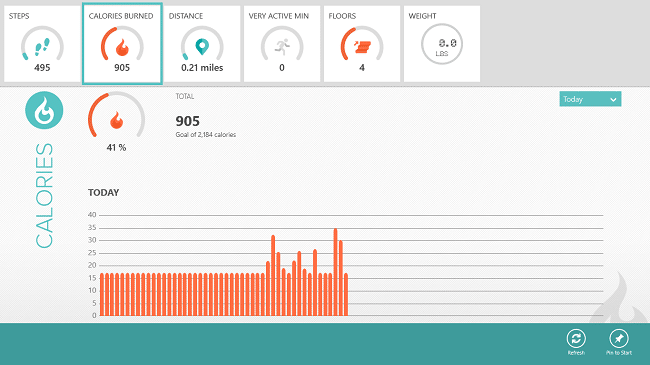 Overall, I like the Fitbit App. I think the Pros outweigh the Cons and the price can’t be beat. However, I do wish that I could configure and update my Fitbit device via my Surface RT*. What I had to do instead, is to initially install the USB Wireless Dongle and necessary software on my desktop computer; but now I can review and sync my info via the Surface RT. Because I did have to go through that intermediate step, I am giving it 4 out of 5 smilies.

*Note: in order to configure, update, and troubleshoot your Fitbit device, you need Fitbit Connect software that can be installed on the Surface Pro line of tablets but not on the Surface RT/2 line.

You may also like our other views: Surface Carry Case Review and Surface Pro 2 Battery Life.