There has been much hype on the web about the new Windows 8.1 Update 1 (also referred to as the spring update); many leaks and many rumors. The speculations about what the upgrade will include reached a frenzy after the Microsoft Build Conference because the demos shown at the event looked really promising and made some folks very hopeful. It is true that Microsoft made a few changes to the way Windows 8.1 looks but overall if you expected a huge upgrade, you may be disappointed.

Most of the changes were focused on addressing issues keyboard-and-mouse-computer users have complained about with Windows 8. These changes won’t really make much of a difference to you, unless you bought a docking station and are using your Surface as a desktop replacement (like me) or if you regularly use a keyboard cover and a mouse.

Answer is simple, it wasn’t in the update. Although Microsoft promised to bring it back in a “future update”, the company representatives said nothing about which future update. And it obviously was not in yesterday’s. It may be in a later one this year or in Windows 9 next year…who knows? Check out this nice write-up about it from ExtremeTech.com.

The lack of Start Button honestly doesn’t bother me because I rarely use the desktop, even if I have the Surface docked. I am most often in the Metro interface.

This section covers changes that you might see (and use) if you are primarily a touch user. Most of us Surface users fall into this category, a majority of the time.

Search from Start Screen: One of the more obvious indications that the Windows 8.1 Update 1 installed successfully is the added search icon/button to the Modern (Metro) Start Screen right by the account picture in the upper right corner.

It wasn’t that much of a chore to bring up the Search Charm before but it is a little more convenient in the new setup. Funny though, they left the old Search Charm in place even though it practically overlaps the new button.

Power button on Modern Start Screen – Pro Only: This one only shows up on the Surface Pro or Pro 2 but it adds a Power button/icon next to the Search button I just mentioned. Like the search button, it’s a minor additional convenience.

The Surface RT version of the update does not include the Power icon in Metro – although Joanna says she would have liked it. The rumor has it that the designers were concerned that users might accidentally hit it when trying to use the Search button.

However, since it includes an “are you sure you want to do this?” menu, it’s a minor concern at most so, I don’t know how accurate the rumor really is.

Pin Modern apps to the Desktop Task Bar: This one almost went into the Mouse & Keyboard section below. Basically, Microsoft added the ability for you to pin Modern apps (from the Windows Store) to the taskbar in Desktop mode. 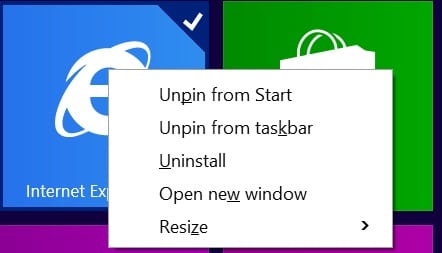 You can do it with either the tap and hold technique like you would before the update to pin a Metro app to the Start Screen or you can use a mouse and right click on the tile. 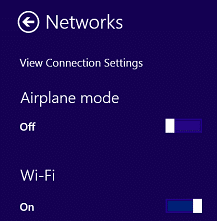 Get to Network Connections Settings Easier: Before the update, it the network connection settings were buried somewhere within PC Settings but now they are nicely at your fingertips at the top of your Networks list. This is just a little tweak but logical and useful.

Control Panel shortcut in PC Settings: This is yet a nice little convenience, you don’t have to switch to Desktop mode first and launch the Control Panel anymore; now you can do it right from your PC Settings.

Keep in mind that it will still open in Desktop, it is just that now it’s easier to get to.

“New App installed” notification/reminder: It tells you that new apps have been installed by putting a small message at the bottom of the Modern Start Screen reminding you that you installed new apps. Again, useful but not earth-shattering. 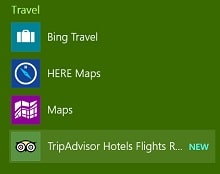 New apps highlighted: In addition to giving you the reminder on the Start Screen, the update also changes the Apps view (the view you get when you swipe up to see all of the installed apps), you can now see that the newly installed apps are highlighted along with the little “New” tag that was there before.

I find this to be very convenient because before it was kind of a pain to find your newly installed apps since they don’t automatically pin to the Modern Start Screen.

Internet Explorer 11: IE 11 has been updated, though you may not notice it. This is because a lot of the changes were “internal” like better adaptation to different screen sizes, updated developer tools (these are rather good and appear when you press F12), and a new Enterprise Mode.

The one thing that you will probably notice is the new Read Button. Previously there was a icon depicting a book and now it is very conspicuous.

If you don’t know about reading mode in IE 11. It basically let’s you strip away all of the extraneous content from web pages with a lot of text and show you only the main text in a simplified (and hopefully easy to read format). You can see an example in the pics below. 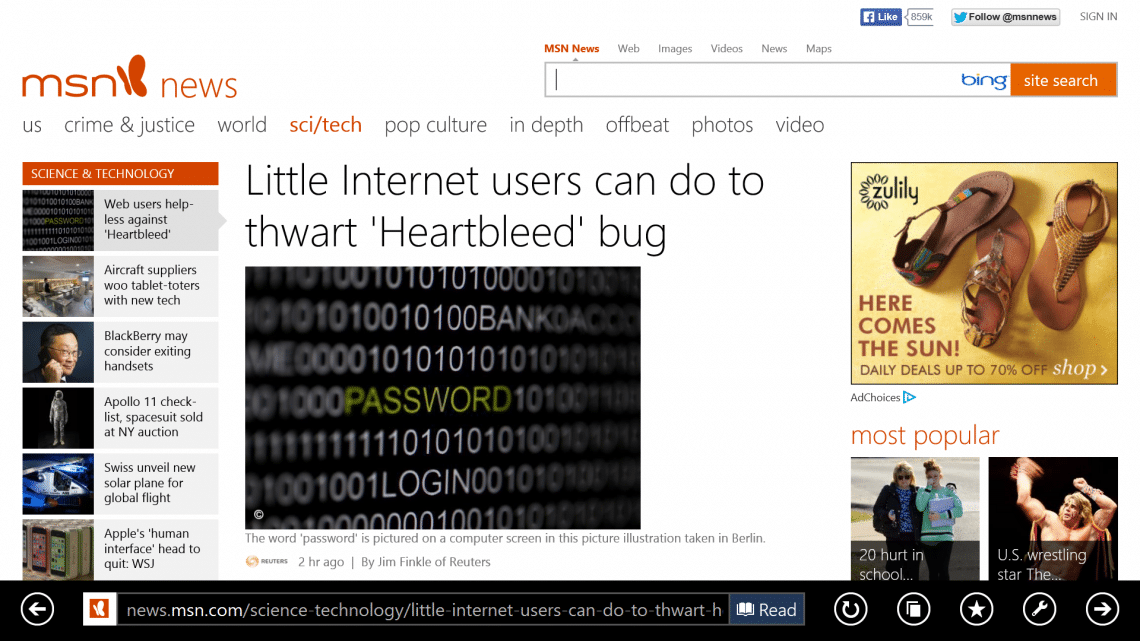 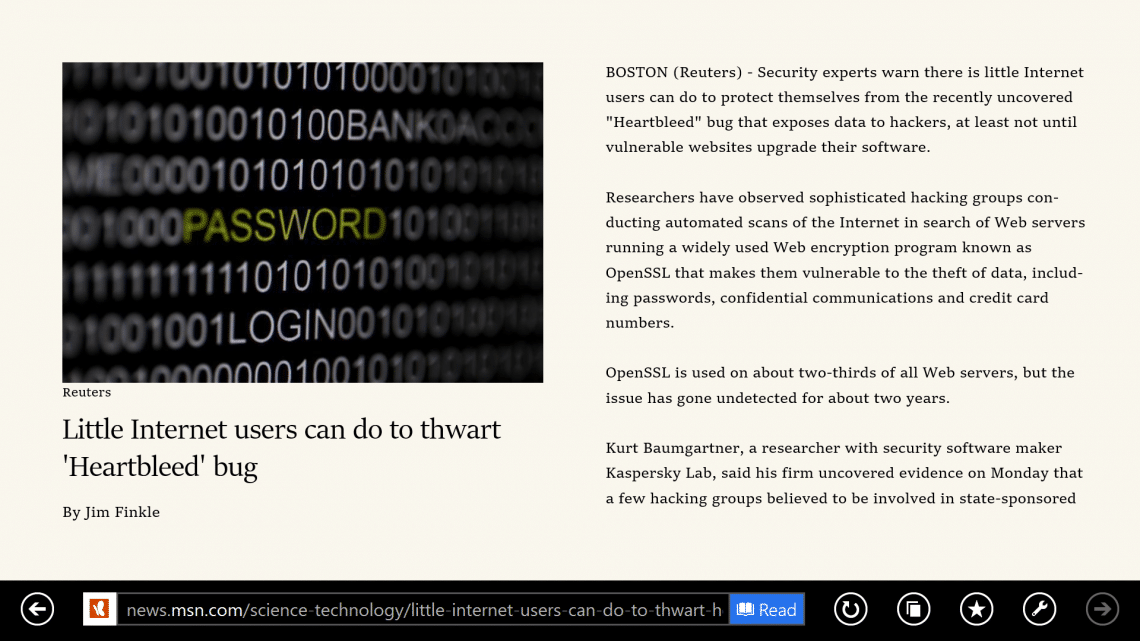 Same Page With Reading Mode On

This section covers changes that you are most likely to see (and use) if you are primarily a mouse and keyboard user.

Split Right/Shift Left: This is nice for multitasking when using a mouse. With touch, it’s always been pretty easy to drag apps into split screen mode. Not so much with a mouse since it can be a little trick to grab and drag the app. 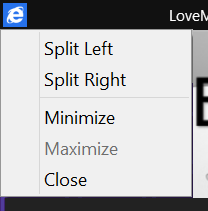 To make it easier, Microsoft added a right-click option to let you shift an app to the left or right of the screen so you can start a second app more easily with a mouse.

Right click menu: When you right-click within any app, it will bring up the right-click menu in much the same way clicking on things in Windows 7 would. The contents of the menu will vary depending on what you right-click but, it’s nice to have the option back.

That’s all I have for you on the new Windows 8.1 Update 1 for Surface tablets. Some of the new tweaks are useful.

How good was the update overall? I’m still trying to decide while I recover from the pain in the a$$ it was to install, see Fix Windows 8.1 Update 1 Errors.

Oh and in case you’re thinking about skipping this update, think again. Microsoft says that it will be required for future Win 8.1 patches….go figure.