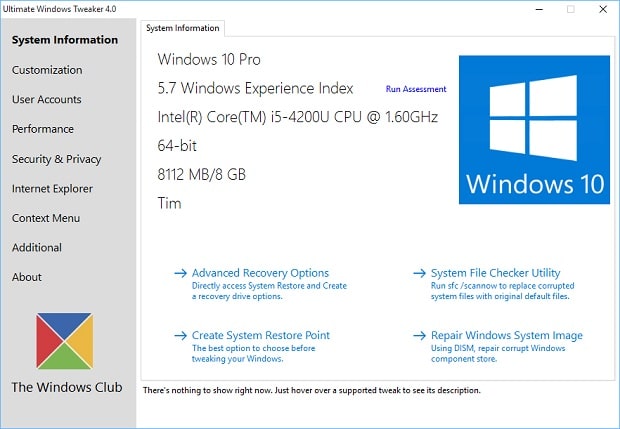 Surface you’ll want to take a look at this tool.

It is free and portable (i.e. it doesn’t need to be installed, just copied to your Surface – it’s only about 550kB) and makes it easy to tweak over 200 different aspects of Windows that are usually hidden away or would require Registry editor/Group Policy editor to change.

This version of the app has been redesigned for Windows 10 and comes with a bunch new tweaks (as compared to the old version). Also, some existing tweaks were updated or removed if no longer useful.

The first time you launch the tool, it will tell you it’s going to make a System Restore Point and a SmartScreen security dialog may appear. If it does that, click for additional options and choose to Run Anyway. The app will launch, and the SmartScreen dialog won’t appear in the future.

Ultimate Windows Tweaker 4.0 for Surface: I Don’t Want to Tweak my Surface

Even if you don’t want to “tweak” the way Windows works on your Surface, you should still consider downloading a copy of Ultimate Windows Tweaker 4.0 because it also provides an easy way to get to certain, useful tools and security settings.

For example, if you’ve looked at our article comments or our Surface. I do this because SFC is a easy way to fix problems that may be the result of some minor corruption of system files.

Well, with Ultimate Windows Tweaker you can kick off a SFC operation with a single click. You can also do a DISM Check, and access recovery tools (backup/restore). Now, that’s useful, wouldn’t you say? 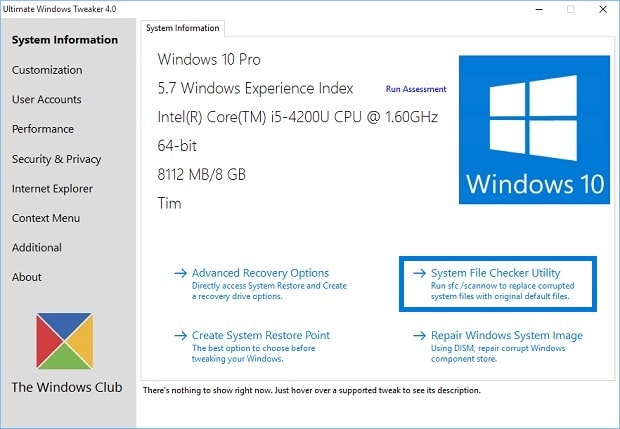 In addition, you can also easily access common privacy settings, such as disabling your advertising ID or turning off Windows Update Sharing.

So, I recommend that you Surface, it’s handy to tuck away in a folder or USB drive just in case you need it later. The only real downside to it is that it doesn’t yet support Edge – but it does include tweaks for IE 11.

Oh, if you haven’t updated to Windows 10 yet, you can download Ultimate Windows Tweaker 3.0 for Windows 8.x.