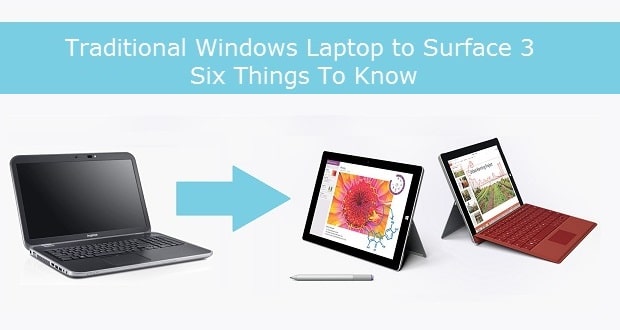 If you’re still using a traditional Windows laptop but you’re considering making the jump from a laptop to a Surface 3, here’s a list of six things you’ll want to know to make the transition from laptop to Surface 3 smoother for you.

It’s a shame Microsoft sells the Keyboard Cover separately because it really is almost required. If you were coming from a different tablet, it might not be such a necessity but, as a laptop user, you’ll really want to get one.

The downside to getting a Keyboard Cover is that it’s a bit pricey.

If you’re used to tablets (or a Chromebook for that matter), running a mobile OS such as Android or iOS, then you’ll be happy to know that the Surface 3 runs a full-blown version of Windows.

This means that you can load the same business apps you used on your laptop and won’t have to learn a new version to make the switch.

This is one of those “elephants in the room” no one talks about but, many of Google’s offerings (mail, docs, sheets, etc…) simply SUCK when it comes to touch support.

Yes, they work but there will be annoyances such as tiny links that are difficult to tap and bugs like not being able to reliably switch the logged in user unless a mouse or touchpad is used.

Chrome has a “Windows 8 mode” that sort of makes touch easier but it’s not exactly what I would actually call touch-friendly.

4) Laptop to Surface 3: Yes, you can keep your mouse

Whether your favorite mouse is USB or Bluetooth, you will be able to use it with your Surface 3. All you need to do is attach it and, maybe, load some drivers. Same goes for all of your USB or Bluetooth connected peripheral devices. You won’t need new ones, just move them over from your old Windows laptop.

This can help you ease the transition from keyboard/mouse to touch since you’re coming from a laptop.

5) Laptop to Surface 3: The Surface 3 isn’t a powerhouse

If you’re coming from a netbook, this might not be such a big deal since they tend to be low power machines built for portability and long battery life. However, if you’ve been using a full-sized laptop with an Intel i5 or i7 processor in it, you might be a bit disappointed with the performance of the Surface 3.

Don’t be too discouraged, though. The Surface 3 does have enough power to run most applications (except for really CPU-intensive things like rendering 3D animations or playing high resolution games at 60FPS) and the battery longevity you’ll gain, will more than makes up for the lower processing power.

If you need more power than the Surface 3 can provide but, you still want to switch to a laplet, consider the Surface Pro 3 which offers a hefty CPU and fair amount of RAM.

6) Laptop to Surface 3: You’ll want to get a Surface Pen

Even if you decide to skip the Keyboard Cover, you should really consider the Surface Pen. The ability to easily draw, markup documents and send handwritten emails is pretty cool.

In addition, it really blurs the line between tablet and paper in a way that only the Surface has been able to do.

For example, if you’re a business person or student, I’ll bet you carry around a laptop and multiple notebooks/pads of paper, a whole array of writing implements stuffed into a big, heavy bag. Instead, imagine just having a slim, light tablet with a pen to replace all that.

Maybe you’re a professional or amateur artist? If so, the pen can become the instrument of your expression. With the right software, it can be used to ink or sketch highly detailed illustrations. If you don’t believe me, check out Surface Pen.

Just trust me on this. Regardless of how you plan on using your Surface 3 you will find a compelling use for the Surface Pen.

OK, those are my six pieces of advice for people considering the switch from laptop to Surface 3. Have you already made the switch? Do you have additional advice? If so, leave a comment and let everyone else learn from your experience.