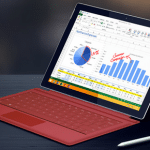 My replacement Surface Pro 3 is finally here, but good grief, if it didn’t turn out to be an ordeal!

And when it came right down to it, the FedEx driver was the one to fix the screw-up.

Let me back up and tell you the full story….

As you may recall, I was having quite a few problems with my Surface Pro 3, see I Love You But You’re Going Back post. So, I sent it in to Microsoft for a replacement. I was told 7-10 days turnaround; I wasn’t thrilled but couldn’t really do anything about it so I said fine.

A few days after I sent the Surface Pro 3 in for replacement, I checked online to see if Microsoft had received it and indeed they did. However, at that time I also noticed that they had the wrong address (house number and zip code) on the “ship to” field for where to ship my new one.

I thought: Oh, crap! If they send it there, it will get sent back to them because the address doesn’t exist and it will take me forever to get my replacement Surface Pro 3.

So, I contacted Microsoft in an attempt to get them to correct the shipping address. The entire ordeal took 33 minutes and I was told at the end that they had to open another request and pass it on to yet another department within Microsoft to change the address – what?!

I have to admit, I was really losing my patience because…

OK, so at the end, the tech assured me that there will be no delay and that the address will be corrected prior to shipment of the new Surface – fine.

Two days later, I got notification that the new Surface Pro 3 will be shipping to me (at the still wrong address) within 2 business days.

Well, I thought, since I have a confirmation number and another ticket open for the change of address, they will surely get this straightened out and send the device to the correct address – so I waited.

The next thing I received was notification of shipment with a tracking number from FedEx. So, I went to FedEx website and it said that the package was in my area already but it didn’t list the shipment address. So, back I went to the Microsoft service site, I looked up the shipment information and lo and behold it was sent to the WRONG address!

It was finally then that I reached the end of my rope and began freaking out. It has now been 8 days into this process and I did not want my Surface to go back to Microsoft. So, I contacted FedEx and asked them to hold the shipment at the local facility.

Unfortunately, it was already put on the truck for delivery (to an address that does not exist) but they said that when the truck returned to the warehouse, they would hold it. Whew!

It gets better though, the next call I got was from Microsoft telling me that the FedEx delivery could not be stopped and the Surface is on a truck to be delivered. I then told them again that the shipping address they sent to is wrong and that I already spoke with FedEx. They insisted on calling FedEx to try to straighten it out. Then they call me back again to tell me that it was on the truck and there is nothing they can do.

I just want my damn Surface!!!

So, after all the stress and multiple phone calls from Microsoft, I’m expecting the device to be returned to FedEx facility and be available for me to pick up the next day.

Instead, I got home and the FedEx driver, who apparently caught the mistake because he/she was smart enough to look me up and correct the address, delivered it to my home and left it at the door.

In the meantime, I never heard back from Microsoft on the change of address request nor was there any follow up to see if I actually got my Surface – I’m not impressed.

But I do have my new Surface Pro 3 and, so far, it looks like the Wi-Fi problems are gone. However, I will give it a few days of heavy use and report back to let you know how the new Surface Pro 3 is behaving.

If you have to exchange your device, I sure hope you have a better experience than me or at the very least, less stressful.

Here is the chat transcript with Microsoft Support:
Please note that it says Tim because the account is under his name and they usually get confused if I use my own name for tech support calls:

Have you had any experience with Microsoft support? Were they good or bad? Please feel free to share.