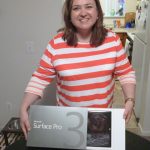 A very happy me!

So, since I am a Surface 2 user (Windows RT), these impressions are from my perspective, (i.e. a Surface RT/2 user’s perspective.) In this post, I’m going to talk about the Pros, the Cons, and the Not Sure’s as compared to Surface 2, as well as my overall impression.

The very first thing I noted about the Surface Pro 3 was its screen size. As I walked up to it at Best Buy, it didn’t seem overly big. I thought: geez this looks exactly like my Surface 2 – until I saw them side by side.

Holy moly is it bigger!  In fact, this is my favorite thing about the Surface Pro 3. Now when I write a post, it feels like I’m writing on a laptop. I see more on my screen; I mean look at the picture above, you can actually see much more of the web page. This is a huge plus and I didn’t realize what I was missing until now. Since the size is similar to a pad of paper, reading Kindle books on it is also quite nice because you see more text on the screen.

Oh, and let’s not forget the onscreen keyboard, it is now easier to type using the onscreen keyboard because you actually see more than 1/2 of your page and it’s even better in the landscape mode. So, the larger screen really improves the overall writing and viewing experience.

As far as quality of the screen, pixels, and brightness. I would say it’s about the same as my Surface 2. They are both excellent and the differences between them can not be detected by the human eye.

This was a nice surprise – the Surface Pro 3 feels really light. I mean, I read that it was lighter than the Surface Pro 2 but until I got my hands on it, I didn’t fully appreciate it. It really is very light for its screen size (12″) at only 1.76lbs; compare that to my Surface 2 at 1.49lbs but only a 10.6″ screen.

Back of Surface 3 and 2 side-by-side.

Otherwise, the Surface Pro 3 looks and feels just like the Surface 2. It has the same grey/matte silver finish. In fact, from the back, they look just about identical, except for the size, of course. I like this because I much prefer the silver to the gun metal color of Surface Pro 2.

The pen was one of the things I was looking for because my Surface 2 doesn’t have one – I use a cheap capacitive pen on it but it sucks for taking notes and any type of handwriting recognition. I must say that Surface Pro 3’s pen far surpassed my expectations. It is an active capacitive pen and even the “little un-artsy me” can draw with it. 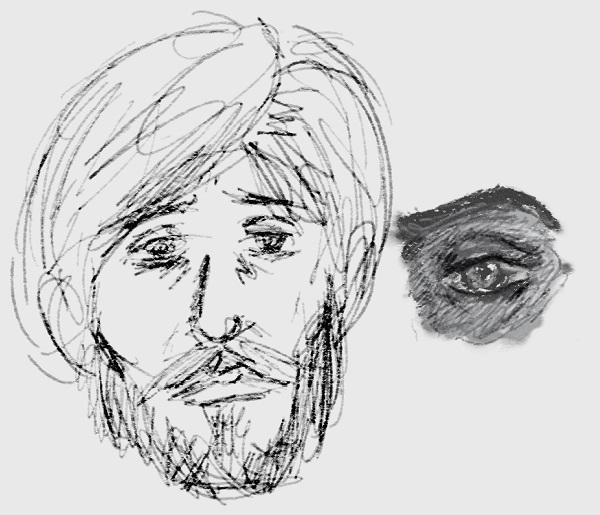 This is a 5-minute doodle a friend of mine did on my Surface Pro 3.

It also helps that it is awesomely integrated with OneNote, which I expect will help me greatly in taking notes in meetings. It truly gives the experience of writing on a piece of paper. Big Plus for me on this one! By the way, check out these nice tips from Microsoft on how to troubleshoot the Surface pen.

I always felt that Windows Apps Store was sufficient for what I needed, as far as applications go, but it is nice to now be able to install literally any Windows 8 app! I like it a lot. I will be installing everything I have on my desktop and then some. I admit that that’s a nice upgrade from the Surface 2. By the way, I plan on keeping on Surface 2 as my “purse tablet” because I still love it.

WOW! This thing has a nice keyboard – I bought the purple one. The keys feel much bigger (although I don’t think they actually are, they may just be a bit more raised) than on the previous Surface versions, and I really like the touch pad on it – it seems much more responsive. 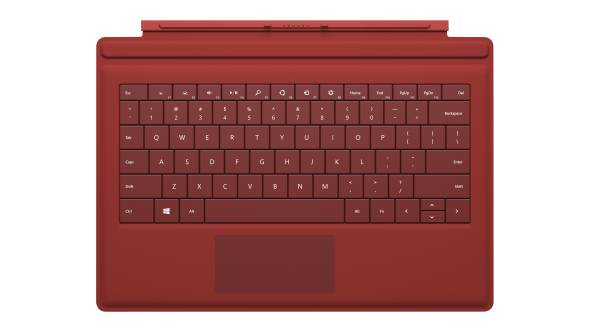 The keyboard is back-lit and its layout is exactly the same as of its previous versions. A nice touch is a little pen loop that color matches and can be attached to the keyboard. The keyboard tilt (you know where you can pull it up to attach at the front of the screen) is also nice. It creates a more ergonomic feel and less strain on the wrist. I like it.

If you’re upgrading from the Surface RT or Surface 2, don’t expect to get MS Office pre-installed. That kind of sucks because now I have to pay for the Office Suite. On the other hand, I can get the version I want, so maybe that’s not so bad. But it is an added expense.

Although I like the keyboard, I was greatly disappointed at its lack of rigidity on my lap. I was really hoping that I could be use the Surface Pro 3 on my lap much like a…. well…. laptop. I do not find it to be the case. Don’t get me wrong, it is more rigid with the “Up” setting but not enough. Tim has long legs and can actually use it on his lap, but for me, it is still too flimsy. I thought that Microsoft was going to make it so that the keyboard can be set rigidly in place but unfortunately, at least with this keyboard, it can’t be done. This is my biggest disappointment.

The Not Sure’s: Surface Pro 3 First Impressions: The kickstand

I think that it’s cool that the kickstand can be adjusted all the way down but it simply doesn’t feel as sturdy as my Surface 2’s kickstand. Now, this could be because it doesn’t actually snap into place at different settings and therefore gives me the impression that it may (over time) keep on sliding. But it’s really too early to tell, so the jury is still out on this one. 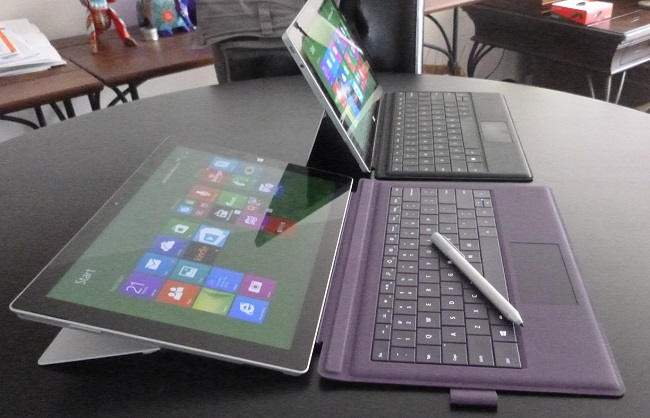 The kickstand now goes back much farther.

I wish Microsoft had kept the original plug on the new Surface Pro 3 because, with as many power plugs that we already have, we would have spares. Now with the entirely new design, the Surface Pro 3 can only be charged with its own charger. I do believe that the design itself is better though; it seems to latch on magnetically better than the older plugs, so Microsoft was doing an improvement here – I don’t think they were trying to piss anyone off – but I lost the use of my spare power supplies that I already invested in.

I would say that I’m quite happy with the purchase. I love the large screen and the pen; those two things in themselves were worth it to me. I’m also excited about the possibility of the using it as a full desktop replacement. As I said, my biggest disappointment is the lack of a rigid setting on the keyboard to allow me to use it on my lap like a laptop. All in all though, I think this will be a great tablet/desktop for me.

I hope you find this helpful. Have you upgraded from the Surface RT or Surface 2 to the Surface Pro 3? How do you like it? What’s your experience?

Up next, Tim’s impressions from the Surface Pro 2 user’s perspective.

You may also like my posts on Surface Pro 2 and Surface Pro 3 comparison and Warranty options for your Surface.