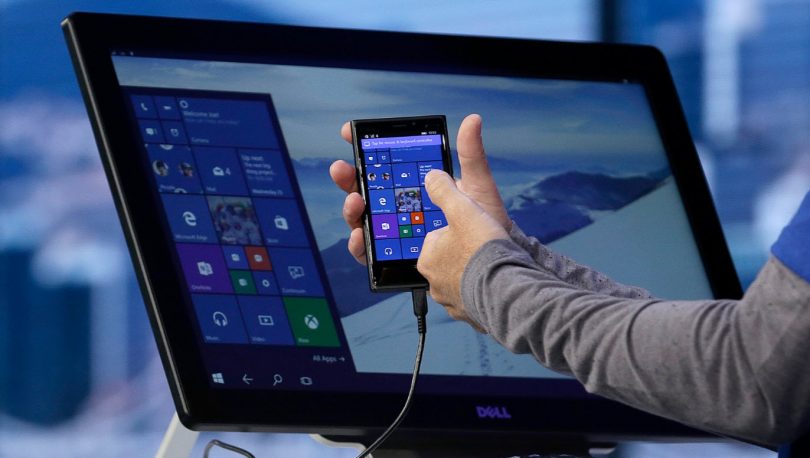 Saying that Microsoft has been less than successful with their efforts so far in the smartphone business is an understatement. This, despite spending billions of dollars into both hardware and software. They have designed their mobile OS to be efficient so that they can run on cheaper hardware which actually works well. And guess what? Most of their phones are running on low to mid range hardware which is not what the market demands in the developed countries. I (a long time Android phone user) have no desire to switch to the Windows phones at the moment but Microsoft appears to be more interested in spending their efforts in the future – the Surface Phone and its mobile OS.

Continuum is the key. But what is it?

Microsoft wants uniform experience across all of their devices. Yes that includes PCs, laptops and phones with much smaller screens. Imagine phones that work like PCs. Continuum for Phones makes this possible to some degree, even today.

Microsoft wants you to use the phone as a phone WHILE allowing you to project the second view into a larger screen through multi-tasking. It’s like carrying a laptop with you that fits in your phone. Sounded quite intriguing during the launch time for someone like me who tends to work quite a bit on the road. You do need a small dock or a wireless dongle for your phone for the connectivity to your keyboard, mouse, monitor, hotel TV, or even a projector but it is much lighter and smaller than a tablet/laptop.

So why haven’t you heard of Continuum already if it is that great?

Well, it’s not that great, yet. Here are some of the issues with the Continuum:

As you can see, most of these reasons are actually not show stoppers and they are fixable. Think of it as Continuum v1.0. For me, the biggest reason for not switching is the availability of good mobile apps on the Windows Mobile platform itself. I’m a hardcore Android user and I use Google apps heavily, including Google Drive apps. To be fair, Windows Mobile apps are improving and it will be matter of time before they will be filled with apps “sufficient” in quality.

What’s a UWP? It’s yet another variation of Windows platform Microsoft has come up with. Think of it as a natural evolution of today’s Windows platform. Eventually, all current Windows apps will be converted to the UWP platform and they will continue to run on your Windows devices. Unlike the conventional Windows platform, the UWP is highly restrictive from developer’s perspective, much like the current Android and iOS platform which is a good thing. All apps will offer similar experience/looks and a single app can’t go crazy bringing the whole machine down.

So where does Surface Phone come into play?

Microsoft has a big plan in April 2017. They are going to announce a major update to their mobile OS, code named Redstone 2. It is more than likely that they will also debut a new line up of hardware including their new flagship phone. There’s even a rumor of Redstone 3, which will also heavily focus on the mobile platform. Clearly, Microsoft is more serious about the mobile platform than ever before. And one of their main focus will be to produce the best phone for productivity. Microsoft has been using “Surface” for premium level devices. I expect the Surface Phone to match the best phone hardware available at the launch time.

I’d like to see the Surface Phone / Continuum evolve even further. Running UWP (Universal Windows Platform) apps in your phone while projecting the content to a bigger screen has a lot of potential. Imagine carrying just a phone around with you, offering 80% of your laptop functionality. Use your phone as a touchpad/keyboard.

Android and iOS has a lot of apps but productivity-wise, it is still lagging behind compared to the Windows platform. Because of this, I usually end up carrying my Android phone, Android tablet and a Windows laptop when I travel. May be, just may be, the Surface Phone is the answer.