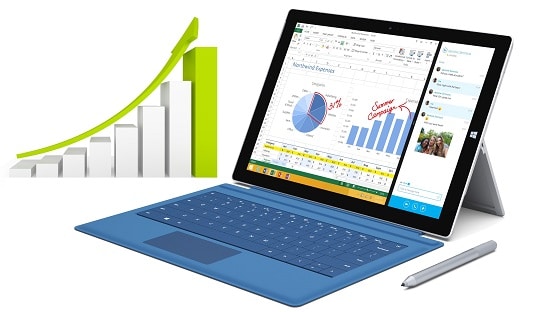 After two years, around $1.73 billion in losses, and persistent rumors that they were going to stop making them, it looks like Microsoft’s persistence may be starting to pay off.

Recently, Surface is starting to turn a profit, it’s an excellent device and is selling twice as fast as the (also excellent) Surface Pro 2 did.

However, it shows that Microsoft is finally starting to get a reward for their persistence and will (hopefully) give Microsoft reason enough to keep moving ahead with the Surface line.

Surface is Starting to Turn a Profit: Challenges still ahead

While this is really good news for Microsoft (and Surface supporters), there are still some significant challenges facing Microsoft.

For example, it’s been estimated that the $908 Million dollar figure only represents the sale of around 1 million Surface tablets (probably a little less, actually). Compared to the reported 12.3 million iPads Apple sold last quarter for $5.3 Billion, it’s a pretty small percentage of the market.

Also, there’s the ongoing tablet slump as tablet sales seem to have flattened out and net book sales have picked back up.

The tablet slump phenomenon is not really surprising, if you think about it. Pure tablets like the iPad are generally only good for a limited range of applications like simple games, web surfing and checking email. You just don’t need a new tablet every 3 years to keep up, when the newest and greatest tablet will check Facebook just about as well as a 4-year old one.

Hopefully, Microsoft’s progressive positioning of the Surface as a hybrid device will let them take advantage of the tablet slump and gain market-share.

So, to wrap this up, the profit is good news for Microsoft but it doesn’t mean that the Surface line is out of the woods yet. Hopefully, the next version of the Surface will gain them even more market share.