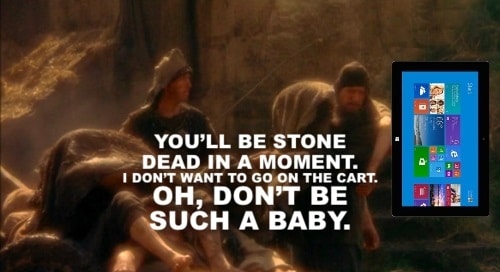 Turn’s out that a new report from WinBeta is claiming that the Microsoft Surface isn’t dead yet.

Apparently, Microsoft is working on a new Surface (not Surface Pro) device, a new low-end tablet that will succeed the discontinued Surface 2 and compete directly against the iPad.

Microsoft is said to be preparing a refresh of the less expensive Surface tablet line for a launch (or maybe just announcement) next month at Build 2015. This would be a month before even the most optimistic Surface Pro 4 release date rumors.

WinBeta is suggesting that Microsoft will be shifting away from ARM-based processors to a low-powered Intel processor. If that report is accurate, the new Surface line would run Microsoft’s full Windows 8.1 operating system rather than the (nearly defunct) Windows RT.

Microsoft may (or may not) brand this tablet under the Surface Pro line, the Surface line, or it might end up branded as something completely new. WinBeta’s article claims the device will not have the Surface Pro brand but will run the full version of Windows 8.1.

So, I guess we’ll have to wait and see but, the way it sounds, it might be too early to put it on the cart because the Microsoft Surface isn’t dead yet.

Oh, and award yourself ten geek points if you got the reference in the picture 🙂 –