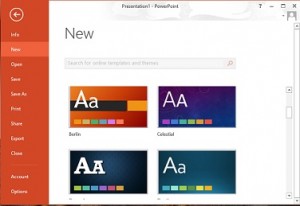 So, you bought a Surface RT?  Excellent!  It is light, battery lasts a long time, and it is pretty inexpensive – good choice.

However, now you may be asking yourself: can I use it for more than checking email, surfing the web, and playing games? And the answer is: Yes you can!

One of the things that you may be interested in is doing presentations with your MS Surface.  If that is your goal, you need to be aware of a couple of things:

So, what specific elements are not available?

Here is the Good News:

PowerPoint 2013 RT is free on your Surface RT.  And most presenters will never need the above unavailable features.  If you have older presentations that you must use, however, there are some workarounds. Most of them will involve the use of a PC. However, the ease of use and new features of PowerPoint 2013 RT far outweigh what is unavailable.  But that is a topic for another post.

You may also like our posts on Travel with Surface RT and Netflix on Surface Review.