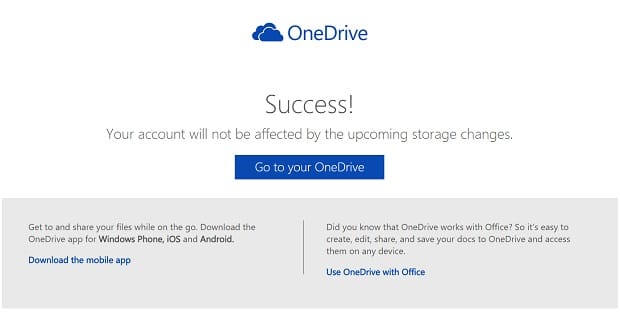 In November, Microsoft said that “Free OneDrive storage will decrease from 15 GB to 5 GB for all users, current and new. The 15 GB camera roll storage bonus will also be discontinued.”

When it happened, we reported that Microsoft was reducing the free OneDrive limit because a small number of folks abused the system. Since then, Microsoft has changed their minds and is now giving you the option to keep your current OneDrive space limits.

In case you didn’t know, prior to the November announcement, Microsoft actively encouraged users to store photos and documents in OneDrive by giving you up to an additional 15GB of space for free if you used OneDrive to store your phone’s camera roll in the cloud.

However, after some 72,000 users voiced their unhappiness about this change on Microsoft’s UserVoice feedback site, Microsoft has apologized and has now given users to option to keep their free OneDrive space limits at 15GB (or up to 30GB if you store your phone’s pictures there).

All you have to do is go to the link below and click the big blue Keep Your Free Storage button before the end of January 2016. You may be asked to sign-in with your Microsoft account;the  when you do so make sure you have that information handy.

Keep in mind that this isn’t a total reversal from Microsoft. This whole thing got started because a small number of Office 365 subscribers were abusing the “unlimited” free space that came with their Office 365 subscriptions. So, if you’re an Office 365 subscriber, the additional space you get will still be limited to 1TB and it will go away if you let it lapse. However, you’ll still get to keep the larger free limits.

Since OneDrive and Surface tablets work very well together, I recommend that you take a minute and follow the link above to make sure you get to keep the current (larger) OneDrive limit.