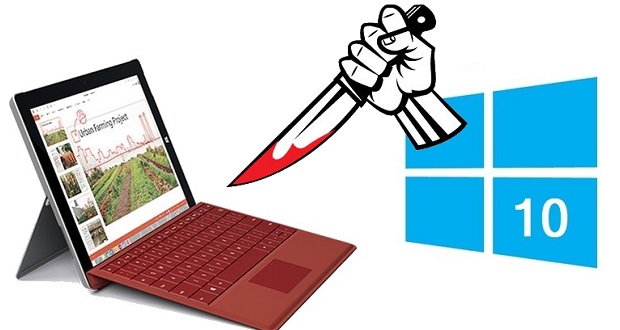 Is Windows 10 Killing the Surface: The Golden Era

It’s no secret that Windows 8 wasn’t embraced by desktop users. Let’s face it, Windows 8.x was designed for touch devices and, therefore, was shunned by keyboard and mouse users. They usually opted to stick with Windows 7 as opposed to upgrading to Windows 8.x.

On, the other hand, folks who bought Surface tablets, by and large, readily embraced Windows 8.x. Yes, the devices came with Windows 8 pre-installed which surely forced Surface owners to, at least, try it. However, it was more than that. We (in general) embraced Windows 8.x, we adopted it, we LIKED it.

Why? Because it worked really well on the Surface. It was very touch-centric, responsive, and with the 8.1 update, rock solid on Surface tablets.

Is Windows 10 Killing the Surface: The Promise

Then Windows 10 was announced and, at first, I think most Surface owners were excited. We were promised advanced features, like Continuum, which would (almost magically) let Windows 10 adapt itself based on whether we were in tablet or laptop mode. I mean, who wouldn’t be excited about that?

And there were promises of the much-beloved Start button returning, and Cortana, and a better browser, and on and on and on….

Is Windows 10 Killing the Surface: The Hope

We, the touch device users, started seeing hints that Windows 10 wouldn’t live up to the hype. We began getting strong indications that Windows 10 was being almost exclusively targeted towards legacy desktop users. We couldn’t believe it, I mean, Microsoft wouldn’t alienate people who bought Microsoft’s hardware, right? Surely it was just a misunderstanding and Microsoft would shift their attentions to ensuring the tablet experience remained solid, once the desktop users were placated…

Is Windows 10 Killing the Surface: The Reality

“OMG!!!”, some cried, “Microsoft sold us out!!!” They have forsaken us for the keyboard and mouse users. How could they do that? The Surface was made by Microsoft!!! How can the newest operating system not be an improvement for their own flagship hardware???

Is Windows 10 Killing the Surface: Now What?

Now, it’s time I ask for your help to complete this rant/opinion/story. Do you think Windows 10 is negatively impacting the Surface line? Will it cause you to go back to a traditional laptop/desktop as opposed to buying another Surface? How could Microsoft do it better?

Or, have I been watching too many dramas on Netflix? Seriously, a survey we did a little while back indicated that most people (better than a 2 to 1 margin) chose to stick with Windows 10 on their Surface, after the upgrade.

It begs the question: Why?

Is it because we feel that we have no choice and Microsoft is going to force us to this new OS anyway? Is it because we want have the same OS on our tablet, desktop, phone? I’m curious as to what you think.

Leave your suggestions and comments below…