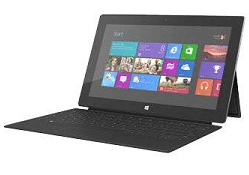 Finally. After being on back order for a month, my Surface Pro arrived. I’m really happy with my RT version but I was geeked to see if the Surface Pro would be as much as I hoped.

And, for the most part, it was.

The first thing I noticed was that it was considerably heavier than the Surface RT. That’s shouldn’t be a surprise as the Microsoft website has it listed at 2.0 lbs. (907g) compared to 1.5 lbs. (680g) for the Surface RT but it was quite a shock at first. It’s also a bit thick at .53in. (13.5mm)

On the plus side, it has that nice 10.6” 10-point multi-touch screen, a full-size USB port, headset jack and a mini DisplayPort conveniently located in spots where it makes sense.

In the figure below, you can see how the ports and controls of the Surface Pro are positioned. 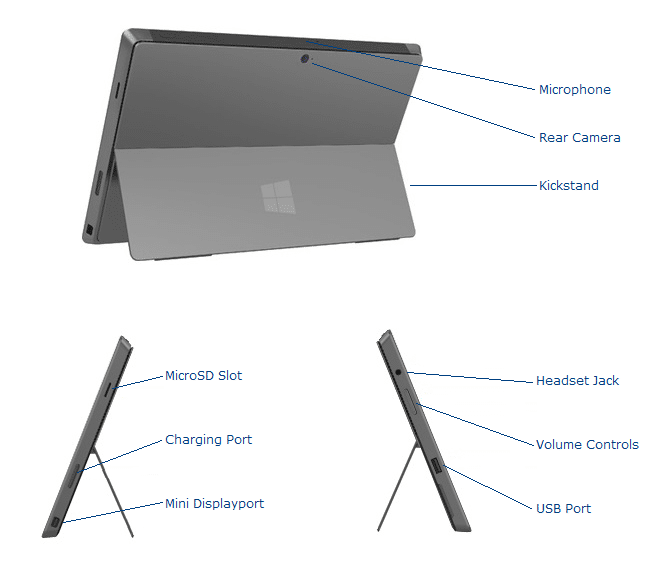 The cameras on the Pro are 1.2MP 720P HD cameras front and back which are the same as the RT specs. They won’t let you take any Pulitzer-prize winning quality pictures but they are adequate for quick snaps or chatting via SkyPE.

The screen is 10.6 inches (27 cm) diagonal with a native resolution of 1920×1080 pixels with a 16:9 aspect ratio. It’s bright and has good picture quality for videos, gaming and just normal use. The only time I had any issues is when I tried to connect an external monitor to the Surface Pro. While it worked just fine, the monitor did not have the same aspect ratio so it looked a little weird on the screen.

For most users this might not be a problem but if you are planning on connecting it to an external screen or projector to display a PowerPoint slides, it might be a nuisance.

Sound from the built-in speakers is a bit tinny and not as loud as I would like but more than adequate for gaming or watching Netflix in your living room.

The Surface Pro is running a full version of Windows 8 as opposed to Windows RT. While they look almost identical, they aren’t.  Windows 8 will let you install *any* Windows application on your Surface Pro. The Surface RT can only run applications that are downloaded from the Microsoft Store.  This is a big plus for Surface Pro.

The ability to install most of the hundreds of thousands of Windows applications published in the past 20 years on your tablet is awesome. However, if it couldn’t run them at a decent speed, loading the applications would be nearly useless. Fortunately, the Surface Pro has a 3rd Gen Intel i5 processor clocked at 1.7GHz, as opposed to the Tegra 3 processor in the Surface RT. So the Pro has more than enough horsepower to run your applications; it performs as well as any Ultrabook on the market with an Intel i5 processor.

The downside is that this extra horsepower drains the battery very quickly. If I were watching movies or playing games I would see only about 3 hours of battery life before needing to plug-in. I did a little research and found that most people are seeing about the same. It’s not a problem, just a trade-off. One I’m willing to make for the convenience of the tablet form factor.

The Pro doesn’t have a Ethernet jack, it would likely get in the way of the tablet form factor anyway, but it does support Wi-Fi (802.11a/b/g/n) and Bluetooth – as you would expect. It would have been nice if it had a mobile broadband option built into the device but that could also negatively impact the already short battery life.

Besides, you can easily use a portable hotspot to get the same result and you can connect multiple devices at the same time.

The Pro includes a stylus so that you can more easily use it to draw or write on the screen. The stylus works well enough and has the ability to attach to the side of the device via magnets. The only downsides to this arrangement are:

Neither of these things are show stoppers but it means you’ll probably just clip the stylus to the keyboard like a notebook as opposed to attaching it via the magnets.

The Pro comes with a 48W power brick as opposed to the 24W power brick with the Surface RT. What I liked about it is that it includes an additional USB charging port right in the side! Since I’m always trying to keep something powered, this little feature is a very welcome convenience.

After two days with it, I’m pretty happy. It’s a little heavy and it won’t take a lot of hard use on a single charge but it lasts as long as an Ultra-book of similar specs. It will never be an “all day use” device like the RT but if you need the power of a laptop in the form factor of a tablet, it doesn’t get much better than this!