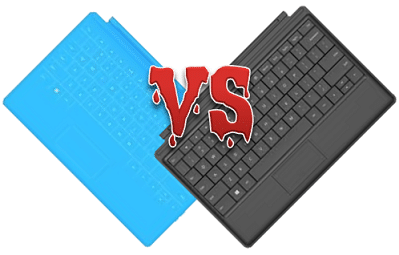 OK, you’ve been reading my weekly updates and this awesome blog has convinced you that you want a Surface.  Now, you’re on the Amazon website ready to buy one and you’re having a touch vs type cover dilemma.

It might sound like a trivial thing to worry about but they are as much as $119 or $129 for the touch or type models respectively (from the Microsoft Store).  If you’re like me, for that kind of money, you don’t want to make a decision lightly.

Unless, of course, you have way too much money (and in that case, please email me and I can help you with that). 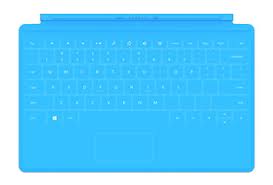 The Surface Touch keyboard is the less expensive of the two models at $119. It has a laminate construction with a circuit board sandwiched between two sheets on vinyl-like material. It comes in several colors (Black, White, Red, Cyan and Magenta) and has the following specifications:

When you pick it up, it’s obvious that it’s durable (see this post on a Surface getting run over by a car at 60 MPH at Windows Phone Central). It’s also easy to see that it will be spill-proof and effortless to clean. In fact, I’ve cleaned mine a few times with a moist cloth and it worked just fine.

When it’s attached to the Surface (with a satisfying magnetic click) you get audible feedback  in the form of “pops or clicks” from the surface’s speakers as you type. It works fine but it takes a bit of time to get used to it and even when you do, you will likely make more typing errors when using it (at least I do). I also noticed that my fingers get tired of typing on it more quickly than on a “real” keyboard. It works just fine for short documents, though. Maybe a page or two.

When it’s attached but folded back, it’s ignored by the Surface and doesn’t cause any problems when you’re trying to use the Surface in tablet mode.

The magnets holding it in place are pretty strong and you CAN pick up the Surface by the cover but I wouldn’t.

There were some early reports of the touch keyboard de-laminating after only a couple of weeks. Most of those reports seem to have died off a couple of months ago and I haven’t had any problems with either of mine (one black and one cyan). 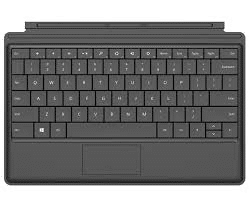 The Surface Type keyboard is the more expensive of the two models at $129. It too has a laminate construction with a circuit board sandwiched between two sheets on vinyl-like material with a thin mechanical keys attached to the top. It only comes in black (unlike the touch) and has the following specifications:

It has nice key feel and the track pad gives tactile feedback when you click it. It’s very responsive and feels like a “real” keyboard. The keys are also slightly bigger than they are on the touch cover and that has made it easier for me to type for long periods.

I also noticed that the Surface can detect the difference between the keyboards because it won’t give the audible “pops” when you use the type keyboard . (Seriously, you can’t fool it – even when I tried alternating between them several times!)

The unit doesn’t seem to be as durable as the touch. It makes sense since it has raised edges and mechanical parts. Even after a short time of using it, I’ve noticed some wear marks from where I had the keyboard folded back and was sliding it across the table (on the keyboard). It’s not much wear but I have to wonder what will happen in 6 months.

OK, so which cover should you buy? Well, it depends on what you want. It really does. They both have their good points and work well so you don’t have to worry about going wrong in either case.

OK, to help you make up your mind I came up with these examples and my recommendations:

I hope you found this useful. If you have some experience with the touch or type covers and would be willing to share, I’m sure others would love to hear it.