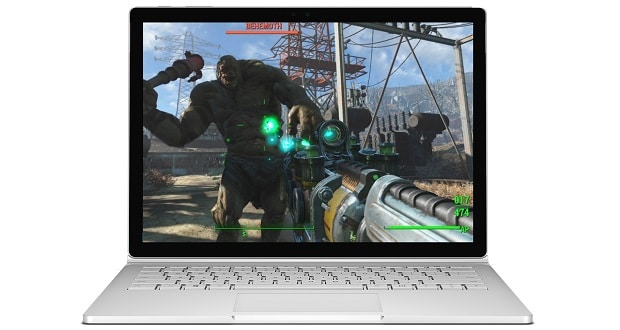 What happens when you combine the hottest game of 2015 with the hottest hardware of 2015?

But, like any good magic, there’s some preparation that needs to take place. In this article, I’m going to tell you what items you’ll need and settings you may need to change in order to successfully play Fallout 4 on a Surface Book.

Fallout 4 on a Surface Book: Configuration

I’ll start off with the fact that I’m using an i7 Surface Book with 8GB of RAM. Of course, I have the NVIDIA dGPU, as well.

I was worried that there would be a lot of tweaking to make it work on the Surface Book but it turns out that the software does a really good job of selecting settings automatically and I had no problems running or playing the game on low settings (which is what the auto detect selects).

The only thing I had to change was to tell it to be full screen as it tried to run it in windowed mode by default.

Fallout 4 on a Surface Book: Accessories

The screen on a Surface Book is big and bright and sharp, so you won’t need an external monitor. Though if you have a widescreen monitor (16:9 aspect ratio), since the game wants to run in a widescreen format, I found that it works better. Keep in mind, however, that’s a subjective measurement. You can see a screenshot from my game below (click for a larger version): 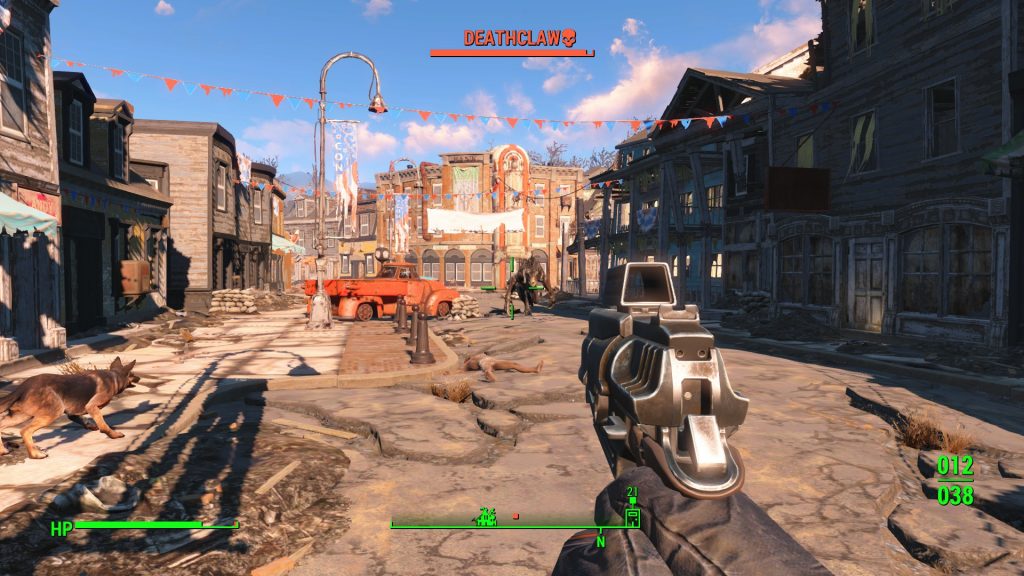 You will need an external mouse, however, as the trackpad pretty much sucks for navigating your way around the wasteland. If you don’t already have one, here are a couple of gaming mouse options for you:

Fallout 4 on a Surface Book: What about the Surface Pro 4?

Most people are saying the game won’t even start on a SP4. I guess I was lucky that mine started.

Unfortunately, even with the graphics cranked down as far as they’ll go the game just isn’t playable when the action really gets going on a SP4 (i5/8GB). Same goes for trying to use the integrated Intel HD520 GPU on the Surface Book.

All is not lost, however. If you have an XBox One you can use the XBox app to stream the game from your Xbox to your SP4. Just make sure you buy the Xbox One version.

Alternatively, if you bought Fallout 4 on Steam and you have a gaming PC running Windows 10, you can try streaming the game to your SP4 (you’ll probably want a Bluetooth keyboard and mouse, though).Unfortunately, I wasn’t able to make this work but you may have more luck.

So, step into your power armor, break out the plasma rifle and look out for Deathclaws. It’s time to leave the vault and explore the wasteland.